Shrewsbury Sixth Form College is a post-secondary co-educational selective sixth-form college located in Shrewsbury, the county town of Shropshire, England. The college, which is commonly referred to as SSFC, currently has an enrolment of approximately 1,650 students,[1] generally ranging between the ages of 16 to 19. The curriculum consists of AS, A2 levels and a small range of BTECs. GCSE English Language and Maths can only be taken alongside an A level programme as resits.[2] The college was ranked as the 17th-best sixth-form college in 2012 (out of 400 institutions),[3] has the best A-Level performance of any state-funded institution in Shropshire,[4] and has been awarded 'Beacon Status'.[5] The college's town centre campus includes several buildings of Grade II-listed status.[6]

Shrewsbury Sixth Form College was founded in 1981 and has developed into one of the top sixth forms in the country. 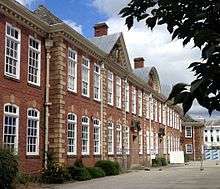 The Grade II listed main building, built in 1910, as viewed from Claremont Bank.

The college has been at the top of the sixth-form college league tables for both AS and A2 level results for many years. Nationally the college was rated as 12th- and 27th-best in 2004 and 2005, respectively, with students having an average of 305.1 UCAS points (approximately ABB/ABC at A-Level) in 2004.[7] In 2009 AS level pass rates were at 94.7%, with 66% achieving grades A-C. For A2 level in the same period, pass levels were up to 98.7%, with 79% achieving A-C grades.[8] In the 2010 rankings, the college had the second best A-Level performance in Shropshire, after Concord College, superseding William Brookes School, Shrewsbury School and Shrewsbury High School.[9] In 2012, the college ranked well in The Sunday Times Schools Guide; performing well against both state and fee-paying schools, the college placed 17th nationally.[3] In 2013, the college achieved a 98% pass rate, with more than half of the students obtaining A*-B grades.[10]

SSFC performs well against local fee-paying schools, with the average A/AS points per student at 852,[11] versus 873 for Shrewsbury School[12] and 876 for Shrewsbury High School.[13] This is higher than both the Local Authority (738) and national (731) results, and for comparison, nearby Shrewsbury College of Arts and Technology achieves a score of 574.[14] In 2009 the college surpassed Shrewsbury School, becoming the third best A-Level institution in Shropshire after Concord College and Shrewsbury High School.[15]

Many students go on to study at Russell Group universities. In 2013 and 2014 respectively, six[16] and seven[17] students were offered places at Oxford or Cambridge.

In April 2016 it was announced that on 31 July 2016 the college would merge with Shrewsbury College (based on London Road) to form the Shrewsbury Colleges Group. The separate identities of the two colleges as a sixth-form college and a vocational college will continue. The merger has been supported by the government's Area Review process.[18][19] 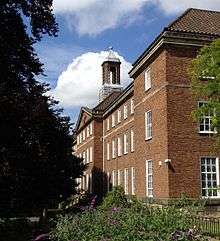 The college's Wakeman site, acquired in 2013.

The college, comprising two campuses, is located on the banks of the River Severn. The Welsh Bridge Campus occupies the main and ancillary buildings of the former Priory Grammar School for Boys (itself built on the site of a mediaeval Augustinian friary).

The college has approximately 1,650 students. The college is the sixth form for the following schools: Sundorne, The Grange, Priory, Meole Brace, Belvidere School, Corbet, Mary Webb and Church Stretton. Students from outside the 'partner schools' (listed above) are also accepted. Students in Shropshire are additionally able to go to other sixth-form colleges, which exist in Oswestry, Ludlow and Telford; however, Shrewsbury Sixth Form College has the best results of any state-funded institution in ceremonial Shropshire, including the Telford & Wrekin, and is therefore popular with all students in the county. A-Level performance is comparable to the nearby independent fee-paying Shrewsbury School and Shrewsbury High School, resulting in a noticeable presence of previously independent-school students at the college.[4] Female students outnumber male students. The percentage of students from a minority ethnic heritage is small, mirroring the profile in the locality.[20] The college has a fair representation system with elected student presidents for each year representing the views and working attitudes of the current students.