This article is about the modern, long-faced breed. For the traditional round-faced type, see Thai cat.

The Siamese cat is one of the first distinctly recognized breeds of Asian cat. Derived from the rtgs: wichianmat (Thai: วิเชียรมาศ,  [wí.tɕʰīan.mâːt]) landrace, one of several varieties of cat native to Thailand (formerly known as Siam), the Siamese became one of the most popular breeds in Europe and North America in the 20th century. The carefully refined modern Siamese is characterized by blue almond-shaped eyes, a triangular head shape, large ears, an elongated, slender, and muscular body, and point colouration. (Aside from the colouration, it bears little resemblance to the original stock, and the more moderate, traditional or "old-style" Siamese, with a much rounder head and body, has been re-established by multiple registries as the Thai cat.) The International Cat Association describes the modern Siamese as social, intelligent, and playful into adulthood, often enjoying a game of fetch.[1] Siamese tend to seek human interaction and also like companionship from other cats.

The Siamese (sometimes in the traditional form) is among the foundation stock of several other breeds developed by crossbreeding with other cats; some examples are the Oriental Shorthair and Colourpoint Shorthair, developed to expand the range of coat patterns; the long-haired variant most often dubbed the Himalayan; and hair-mutation breeds including the Cornish Rex, Sphynx, and Peterbald. 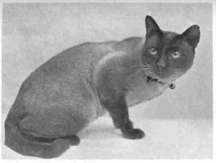 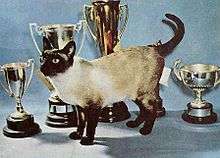 While this show quality specimen from 1960 still exhibits relatively moderate characteristics, the breed standard was setting the stage for the modern Siamese, with its call for a "dainty, long and svelte" body, a long head that "taper[s] in straight lines from the ears to a narrow muzzle", "ears large and pricked, wide at the base" and tail "long and tapering".

The pointed cat known in the West as "Siamese", recognized for its distinctive markings, is one of several breeds of cats from Siam described and illustrated in manuscripts called "Tamra Maew" (Cat Poems), estimated to have been written from the 14th to the 18th century.[2] In 1878, U.S. President Rutherford B. Hayes received the first documented Siamese to reach the United States, a cat named "Siam" sent by the American Consul in Bangkok.[3] In 1884, the British Consul-General in Bangkok, Edward Blencowe Gould (1847–1916),[4] brought a breeding pair of the cats, Pho and Mia, back to Britain as a gift for his sister, Lilian Jane Gould (who, married in 1895 as Lilian Jane Veley,[5] went on to co-found the Siamese Cat Club in 1901). In 1885, Gould's UK cats Pho and Mia produced three Siamese kittens—Duen Ngai, Kalohom, and Khromata—who were shown with their parents that same year at London's Crystal Palace Show. Their unique appearance and distinct behaviour attracted attention but all three of the kittens died soon after the show, their cause of death not documented.[6]

By 1886, another pair (with kittens) was imported to the UK by Eva Forestier Walker (surnamed Vyvyan after 1887 marriage)[7] and her sister, Ada. Compared to the British Shorthair and Persian cats that were familiar to most Britons, these Siamese imports were longer and less "cobby" in body types, had heads that were less rounded with wedge-shaped muzzles and had larger ears. These differences and the pointed coat pattern, which had not been seen before in cats by Westerners, produced a strong impression—one early viewer described them as "an unnatural nightmare of a cat." Over the next several years, fanciers imported a small number of cats, which together formed the base breeding pool for the entire breed in Britain. It is believed that most Siamese in Britain today are descended from about eleven of these original imports. In their early days in Britain, they were called the "Royal Cat of Siam", reflecting reports that they had previously been kept only by Siamese royalty.[8] Later research has not shown evidence of any organised royal breeding programme in Siam.[2] The original Siamese imports were medium-sized, rather long-bodied, muscular, graceful cats with moderately wedge-shaped heads and ears that were comparatively large but in proportion to the size of the head. The cats ranged from substantial to slender but were not extreme in either way.

In the 1950s–1960s, as the Siamese was increasing in popularity, many breeders and cat show judges began to favor the more slender look. As a result of generations of selective breeding, they created increasingly long, fine-boned, narrow-headed cats; eventually the modern show Siamese was bred to be extremely elongated, with a lean, tubular body, long, slender legs, a very long, very thin tail that tapers gradually into a point and a long, wedge-shaped head topped by extremely large, wide-set ears.

By the mid-1980s, cats of the original style had largely disappeared from cat shows, but a few breeders, particularly in the UK, continued to breed and register them, resulting in today's two types of Siamese: the modern, "show-style", standardized Siamese, and the "Traditional Siamese", both descended from the same distant ancestors, but with few or no recent ancestors in common, and effectively forming distinct sub-breeds, with some pressure to separate them entirely.

In addition to the modern Siamese breed category, The International Cat Association (TICA) and the World Cat Federation (WCF) now accept Siamese cats of the less extreme type, and any wichianmat cat imported directly from Thailand, under the new breed name Thai[9][10] Other, mostly unofficial, names for the traditional variety are "Old-style Siamese", "Classic Siamese", and "Applehead" (originally a derogatory nickname coined by breeders of modern-type Siamese).[11] 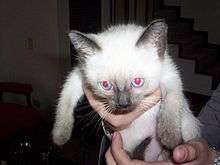 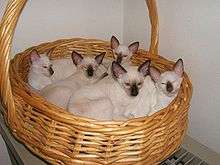 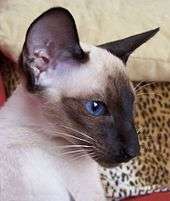 Side view of the head of a seal point adult. 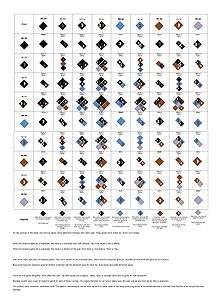 The breed standard of the modern Siamese calls for an elongated, tubular, and muscular body and a triangular head, forming a perfect triangle from the tip of the nose to each tip of the ear. The eyes are almond-shaped and light blue, while the ears are large, wide-based, and positioned more towards the side of the head. The breed has a long neck, a slender tail, and fur that is short, glossy, fine, and adheres to the body with no undercoat. Its pointed color scheme and blue eyes distinguish it from the closely related Oriental Shorthair. The modern Siamese shares the pointed color pattern with the Thai, or traditional Siamese, but they differ in head and body type.

The pointed pattern is a form of partial albinism, resulting from a mutation in tyrosinase, an enzyme involved in melanin production. The mutated tyrosinase enzyme is heat-sensitive; it fails to work at normal body temperatures, but becomes active in cooler (< 33 °C) areas of the skin.[12] This results in dark colouration in the coolest parts of the cat's body, including the extremities and the face, which is cooled by the passage of air through the sinuses. All Siamese kittens, although pure cream or white at birth, develop visible points in the first few months of life in colder parts of their body.[13] By the time a kitten is four weeks old, the points should be sufficiently clearly distinguishable to recognise which colour they are. Siamese cats tend to darken with age, and generally, adult Siamese living in warm climates have lighter coats than those in cool climates. Originally the vast majority of Siamese had seal (extremely dark brown, almost black) points, but occasionally Siamese were born with "blue" (a cool grey) points, genetically a dilution of seal point; chocolate (lighter brown) points, a genetic variation of seal point; or lilac (pale warm gray) points, genetically a diluted chocolate. These colours were at first considered "inferior" seal points, and were not qualified for showing or breeding. All of these shades were eventually accepted by the breed associations, and became more common through breeding programmes specifically aimed at producing these colours. Later, outcrosses with other breeds developed Siamese-mix cats with points in other cat colours and patterns including Red and Cream point, lynx (tabby) point, and tortoise-shell ("tortie") point. (For more information on cat coat terminology, see Cat coat genetics.)

Many Siamese cats from Thailand had a kink in their tails, but over the years this trait has been considered a flaw. Breeders have largely eradicated it, but the kinked tail persists among street cats in Thailand.

Siamese are usually very affectionate and intelligent cats, renowned for their social nature. Many enjoy being with people and are sometimes described as "extroverts". Often they bond strongly to a single person. Some Siamese are extremely vocal, with a loud, low-pitched voice—known as "Meezer", from which they get one of their nicknames[6]—that has been compared to the cries of a human baby, and persistent in demanding attention. These cats are typically active and playful, even as adults, and are often described as more dog-like in behavior than other cats.[14][15]

Sound "Meezer" of a Siamese cat.

Siamese cats, due to their desire to be near people or other cats, occasionally suffer from depression if left alone for long periods of time, and it is for this reason that Siamese cats are often bought in pairs so that they can keep each other company.[16] 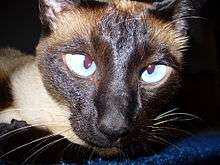 This Siamese cat demonstrates the once common cross-eyed trait that has largely been bred out.

Based on Swedish insurance data, which only tracked cats up to 12.5 years, Siamese and Siamese-derived breeds have a higher rate of mortality compared to other breeds. The median lifespan of the Siamese group was somewhere between 10 and 12.5 years. 68% lived to 10 years or more and 42% to 12.5 years or more. Siamese Scooter holds the record as the world's oldest male cat, dying at the age of 30.[17] The majority of deaths were caused by neoplasms, mainly mammary tumors. The Siamese also has a higher rate of morbidity. They are at higher risk of neoplastic and gastrointestinal problems but have a lower risk of feline lower urinary tract disease.[18][19] Vet clinic data from England shows a higher median lifespan of 14.2 years.[20]

The most common variety of progressive retinal atrophy (PRA) in cats (among them the Abyssinian, the Somali, and the big group of Siamese-related breeds) is related to a mutation on the rdAc-gene, for which a DNA-test is available.[21]

The same albino allele that produces coloured points means that Siamese cats' blue eyes lack a tapetum lucidum, a structure which amplifies dim light in the eyes of other cats. The mutation in the tyrosinase also results in abnormal neurological connections between the eye and the brain.[22] The optic chiasm has abnormal uncrossed wiring; many early Siamese were cross-eyed to compensate, but like the kinked tails, the crossed eyes have been seen as a fault and due to selective breeding the trait is far less common today. Still this lack of a tapetum lucidum even in uncross-eyed cats causes reduced vision for the cat at night. This trait has led to their dependence and interest in humans, as it affects their hunting ability, a desirable trait for many owners. However, it also makes them vulnerable to urban dangers such as night-time vehicular traffic. Unlike many other blue-eyed white cats,[23] Siamese cats do not have reduced hearing ability.

Breeds derived from the Siamese 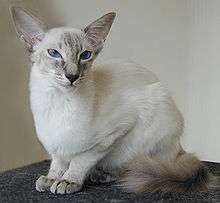 Balinese are also known as Longhaired Siamese, being distinguished by coat length. 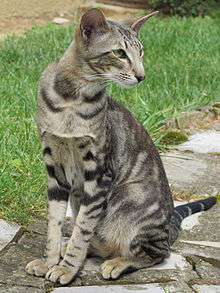 Orientals have the same head and body type but green eyes and a wide variety of coat patterns.