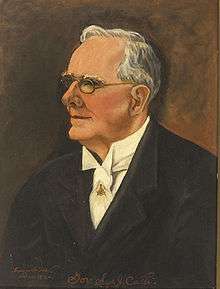 Catts was born in Pleasant Hill, Alabama and he earned a law degree from Cumberland School of Law at Cumberland University in 1882. Catts became a pastor in Alabama and soon he moved to Florida. Catts then left his job as a pastor to sell insurance.

In 1916, he ran for Governor of Florida as a Democrat. He won the nomination at first, but a recount was ordered and he came in second. After that, he received the nomination of the Prohibition Party. Catts called for reform but also espoused anti-Catholicism and racism. On election day, he won the election with 43% of the vote. Catts served as governor from January 2, 1917 to January 4, 1921. As Governor, his proposals for reform were stopped by the state legislature.

At the onset of World War I as Florida teemed with a never-before-seen wave of Anti-German sentiment, Catts attempted to exploit this to further his own previously mentioned Anti-Catholic and racist agendas. The governor publicly theorized that the monks of St. Leo Abbey near Tampa (many of whom were either German-Americans or German immigrants) were planning to arm Florida's African American community for a popular revolt in favor of Kaiser Wilhelm II, after which Pope Benedict XV (a well documented pacifist, who was Italian, not German) would take over Florida and move the Holy See to nearby San Antonio and close all of the Protestant churches. This actually caused a fair number of German settlers to move to friendlier parts of the country. The abbot of St. Leo, Right Rev. Charles Mohr, OSB published several dignified responses to these outlandish conspiracy theories. In support of the St. Leo monks, many Pasco County Protestants made it a point to appear in public with local Catholics. Because of the backlash, Catts was forced to tone down his rhetoric when in the area.[2][3]

Catts publicly labeled black residents as part of "an inferior race," and refused to criticize two lynchings in 1919. When the NAACP complained about these lynchings, Catts wrote denouncing the organization and blacks generally, declaring that "Your Race is always harping on the disgrace it brings to the state by a concourse of white people taking revenge for the dishonoring of a white woman, when if you would . . . [teach] your people not to kill our white officers and disgrace our white women, you would keep down a thousand times greater disgrace."[4]

Catts was ineligible to run for reelection in 1920 and he ran for the United States Senate as a Democrat, losing by a large margin to Senator Duncan U. Fletcher. Catts ran for Governor in 1924 and 1928, losing both times. Catts was one of the Democrats who worked against Presidential nominee Al Smith due to his religion.