Reubin O'Donovan Askew (September 11, 1928 – March 13, 2014) was an American politician, who served as the 37th Governor of the U.S. state of Florida from 1971 to 1979. He led on tax reform, civil rights, and financial transparency for public officials, maintaining an outstanding reputation for personal integrity.[1] Askew is widely thought to have been one of the state's best governors; in 2014 the Tampa Bay Times ranked him the second best governor in Florida history and the John F. Kennedy School of Government at Harvard University rated him one of the country's top ten governors of the 20th century.[2][3]

Askew was born in Muskogee, Oklahoma, one of the six children of Leon G. Askew and Alberta (O'Donovan) Askew. His parents divorced,[4] in part because of what Askew said was his father's "serious drinking problem."[4] Two of his brothers later had similar problems.[4] Askew chose to be a lifelong teetotaller and non-smoker.[5]

In 1937, his mother moved with Reubin to Pensacola, Florida. Askew’s middle name, O’Donovan, was his mother’s maiden name. His signature used the double initial (O’D.) in her honor.[4]

In 1944, Askew was initiated as a member of Escambia Chapter Order of DeMolay, an organization of young men based on the Knights Templar. He graduated from Pensacola High School in 1946. Later that year, Askew entered the Army as a paratrooper, serving for two years; in 1948 he was discharged in the rank of Sergeant.

Askew next attended Florida State University, where he was a brother of Delta Tau Delta and Alpha Phi Omega. At FSU, Askew was elected as Student Body President, beginning his long career in politics. He graduated from Florida State University in 1951 with a B.S. degree in Public Administration.[6] He later completed law school at the University of Florida Levin College of Law.

During the Korean War, Askew served in the Air Force from 1951 to 1953, as a military intelligence officer. He oversaw the program for taking and analyzing airplane reconnaissance photographs of Western Europe. He felt uncomfortable with this task as it violated existing treaties.[5]

In 1955, Askew returned to Pensacola, Florida, where he formed a law firm with David Levin. The firm was called Levin & Askew, and now is named Levin Papantonio Law Firm.[7]

In 1956, Askew was elected Assistant County Solicitor of Escambia County, Florida as a Democrat. In 1958, he was elected to the Florida House of Representatives, representing Escambia County. After serving two terms in the House, in 1962 Askew was elected to the Florida Senate from the 2nd district, also representing Escambia. He was reelected to a redistricted seat encompassing both Escambia and Santa Rosa Counties in 1966, and again in 1967 and 1968.[8]

From 1969 to 1970, he served as president pro tempore of the Senate. In 1971 he received the Legion of Honor from the International Supreme Council of the Order of DeMolay.

Askew emerged as a progressive lawmaker: he supported reapportionment in the state legislature in order to recognize changes in population distribution and increase representation for urban counties, which had a higher population than rural ones. The state houses had been apportioned by geographic county, resulting in inequities that did not represent current state conditions. Urban areas were underrepresented in the legislature. As was typical of many states, rural legislators had resisted reapportionment in order to retain power.[1]

Askew had opposed legal racial segregation and the continuing disenfranchisement of black voters. They had been disenfranchised since the turn of the century, when Florida had passed a new constitution with provisions for voter registration and elections that effectively blocked blacks from the polls. Passage of the Voting Rights Act of 1965 authorized the federal government to exercise oversight over jurisdictions in which classes of voters were historically underrepresented in voter rolls and voting patterns; African Americans were helped to re-enter the political system.

Askew won the Democratic nomination for Governor in 1970. State Secretary of Florida Thomas Burton Adams, Jr., was his running-mate for lieutenant governor. In its endorsement of Askew-Adams, the Miami Herald said that Askew had "captured the imagination of a state that plainly deserves new leadership." During the campaign, the incumbent Republican governor, Claude R. Kirk, Jr., ridiculed his opponent Askew as "a momma's boy who wouldn't have the courage to stand up under the fire of the legislators" and a "nice sweet-looking fellow chosen by liberals ... to front for them."[9] Such rhetoric helped to reinvigorate the Democratic coalition. Mike Thompson, who managed the 1970 Republican gubernatorial primary campaign waged by state Representative L. A. "Skip" Bafalis, sat out the general election between Kirk and Askew. Thompson later said that the often acerbic Kirk had demolished "the coalition of Republicans and conservative Democrats who elected him in 1966. ... The trail from Tallahassee to Palm Beach is littered with the bodies of former friends, supporters, and citizens -- all of whom made the fatal mistake of believing the words of Claude Kirk."[10]

By the margin of 57-43 percent, Askew and Adams unseated Kirk and his running-mate, Lieutenant Governor Ray C. Osborne. (From 1887 to 1969, the Florida Constitution did not provide for a lieutenant governor. The change allowed the top two positions to be filled by running mates from the same political party)

In 1974, Askew was re-elected, with J. H. Williams as his running mate. He is one of just five Florida Governors to have been elected for two terms (the others were LeRoy Collins, Bob Graham, Lawton Chiles, Jeb Bush, and Rick Scott). Askew was the first Governor to serve two full four-year terms (Collins was elected to a two-year term followed by a four-year term, Graham resigned shortly before the end of his second term to become U.S. Senator, and Chiles died in office near the end of his second term; Bush would later become the second Florida Governor to serve two full four-year terms, while Scott is as of 2016 in the midst of his second four-year term).

Through his two terms, Askew worked on tax reform. In 1971 he gained passage of the state's first corporate income tax.[1] He also gained an increase in the homestead exemption.

In every political role, Askew argued for transparency in government. He tried three times to get the legislature to pass a bill requiring financial disclosure by public officials. When they did not, he used a provision of the 1968 constitution, collecting sufficient signatures to put the measure on the ballot in 1976.[5] The voters passed the "Sunshine Amendment" by 78%, the first time the constitution was amended due to citizen action. It calls for full financial disclosure by public officials and candidates, a ban on gifts to legislators, and prohibits former officials from lobbying for two years after leaving office.[5]

At a time of government scandals, he established a reputation for personal integrity and was known as "Reubin the Good." Government scandals erupted around him, but he was called "Reubin the Good" because of his personal integrity. According to a political foe, "He has established a kind of morality in office that causes people to have faith" in government.[1]

Askew was one of the first of the "New South" governors, elected in the same year as Governors Jimmy Carter of Georgia, Dale Bumpers of Arkansas (who defeated Orval Faubus), and John C. West of South Carolina. They were later joined by Bill Clinton of Arkansas. He supported school desegregation and the controversial idea of busing to achieve racial balance (mandatory integration).

After the 1972 U.S. Supreme Court decision in Furman v. Georgia effectively overturned existing state laws for capital punishment in the United States, Florida was the first state to enact a new death penalty statute,[11] which Governor Askew signed. But, Askew personally believed that the death penalty was appropriate only in rare cases.[12] Afterward the Supreme Court accepted new state death-penalty laws in Gregg v. Georgia. Immediately after the ruling, which effectively reinstated the use of the death penalty in the United States, Governor Askew began signing death warrants.[13] Executions were not resumed until the administration of his successor, Bob Graham.

Based on issues related to the cases of two life-sentenced inmates, Wilbert Lee and Freddie Pitts, Askew ordered a new investigation. It found they had been wrongfully convicted of murder in 1963. Askew participated in part of the inquiry and in 1975 pardoned both inmates, who had been removed from death row after the Supreme Court's decision halting capital punishment.[14]

Askew's national stature in the Democratic party grew, and in 1972, he was the keynote speaker at the Democratic National Convention in Miami. For the 1972 presidential election, he was offered the Vice Presidential slot on the Democratic ticket with Presidential nominee George McGovern, but he turned it down. He later accepted an appointment under President Jimmy Carter as Chairman of the Advisory Committee on Ambassadorial Appointments.

He was considered a front-runner for the 1976 Vice Presidential nomination. 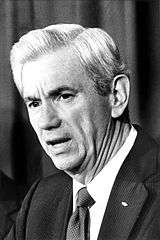 Askew joined a Miami law firm and at the same time began to organize a Presidential bid for the 1984 presidential election. He announced his candidacy on February 23, 1983 after making visits to all 50 states. The first serious Presidential candidate from Florida, Askew never gained traction within the national Democratic party. Although progressive on civil rights, Askew was notably more conservative than most of the other candidates. He was anti-abortion, but failed to win Catholic voters in Iowa; against the nuclear freeze, against the right of homosexuals to work as teachers; and for President Ronald Reagan's invasion of Grenada in October 1983. Askew withdrew on March 1, 1984, after he finished last in the New Hampshire Democratic Primary.

In 1987, he declared his candidacy for the U.S. Senate. But in May 1988, he withdrew from the contest, citing the need for perpetual fundraising.[16] By that time, Florida voters were increasingly voting for Republican candidates for national office. They had started switching parties beginning in the mid-1960s.

In 1994, former Governor Askew was named to the founding class of the Florida DeMolay Hall of Fame.

The Reubin O'D. Askew School of Public Administration and Policy at Florida State University was named for him. It offers courses in government at several Florida universities. From 1999 until his death, Askew gave a graduate seminar at the school, on topics of state and local government as well as international trade.[5]

For the ten years prior to that, Askew lectured and taught at each of the other ten public universities in the state.[5] In 1994, the Reubin O'D Askew Institute on Politics and Society at the University of Florida was established to provide a center for bringing together people to work on state issues. Askew also lectured and participated in conferences there.

Askew married Donna Lou Harper in August 1956. They were married for more than 50 years.[4] They have two grown children: a daughter and a son.[17]

He was designated a Great Floridian by the Florida Department of State in 1998. The program recognizes the achievements of Floridians, living and deceased, who have made major contributions to the progress and welfare of the state.[20]