Not to be confused with the sine function in trigonometry.
For symbols named "… sign", see List of mathematical symbols.

The plus and minus symbols are used to show the sign of a number.

In mathematics, the concept of sign originates from the property of every non-zero real number to be positive or negative. Zero itself is signless, although in some contexts it makes sense to consider a signed zero. Along its application to real numbers, "change of sign" is used throughout mathematics and physics to denote the additive inverse (multiplication to −1), even for quantities which are not real numbers (so, which are not prescribed to be either positive, negative, or zero). Also, the word "sign" can indicate aspects of mathematical objects that resemble positivity and negativity, such as the sign of a permutation (see below).

Every number has multiple attributes (such as value, sign and magnitude). A real number is said to be positive if its value (not its magnitude) is greater than zero, and negative if it is less than zero. The attribute of being positive or negative is called the sign of the number. Zero itself is not considered to have a sign (though this is context dependent, see below). Also, signs are not defined for complex numbers, although the argument generalizes it in some sense.

In common numeral notation (which is used in arithmetic and elsewhere), the sign of a number is often denoted by placing a plus sign or a minus sign before the number. For example, +3 denotes "positive three", and −3 denotes "negative three". When no plus or minus sign is given, the default interpretation is that a number is positive. Because of this notation, as well as the definition of negative numbers through subtraction, the minus sign is perceived to have a strong association with negative numbers (of the negative sign). Likewise, "+" associates with positivity.

The number zero is neither positive nor negative, and therefore has no sign. In arithmetic, +0 and −0 both denote the same number 0, which is the additive inverse of itself.

Note that this definition is culturally determined. In France and Belgium, 0 is said to be both positive and negative. The positive resp. negative numbers without zero are said to be "strictly positive" resp. "strictly negative".

In some contexts, such as signed number representations in computing, it makes sense to consider signed versions of zero, with positive zero and negative zero being different numbers (see signed zero).

One also sees +0 and −0 in calculus and mathematical analysis when evaluating one-sided limits. This notation refers to the behaviour of a function as the input variable approaches 0 from positive or negative values respectively; these behaviours are not necessarily the same.

Because zero is neither positive nor negative (in most countries), the following phrases are sometimes used to refer to the sign of an unknown number:

In many contexts the choice of sign convention (which range of values is considered positive and which negative) is natural, whereas in others the choice is arbitrary subject only to consistency, the latter necessitating an explicit sign convention. 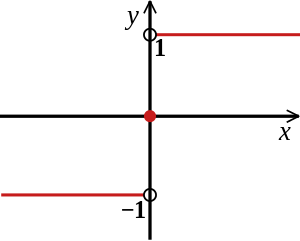 The sign function or signum function is sometimes used to extract the sign of a number. This function is usually defined as follows:

Thus sgn(x) is 1 when x is positive, and sgn(x) is −1 when x is negative. For nonzero values of x, this function can also be defined by the formula

where |x| is the absolute value of x. 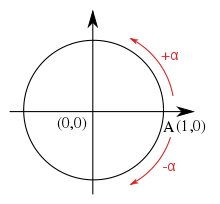 When a quantity x changes over time, the change in the value of x is typically defined by the equation

In computing, an integer value may be either signed or unsigned, depending on whether the computer is keeping track of a sign for the number. By restricting an integer variable to non-negative values only, one more bit can be used for storing the value of a number. Because of the way integer arithmetic is done within computers, the sign of a signed integer variable is usually not stored as a single independent bit, but is instead stored using two's complement or some other signed number representation.

In contrast, real numbers are stored and manipulated as Floating point values. The floating point values are represented using three separate values, mantissa, exponent, and, sign. Given this separate sign bit, it is possible to represent both positive and negative zero. Most programming languages normally treat positive zero and negative zero as equivalent values, albeit, they provide means by which the distinction can be detected. 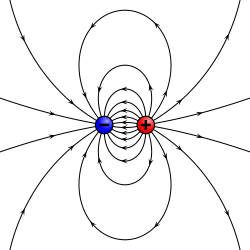 Electric charge may be positive or negative.

In addition to the sign of a real number, the word sign is also used in various related ways throughout mathematics and the sciences: