"opposite number" redirects here. For other uses, see analog and counterpart.

The additive inverse is defined as its inverse element under the binary operation of addition (see the discussion below), which allows a broad generalization to mathematical objects other than numbers. As for any inverse operation, double additive inverse has no net effect: −(−x) = x. 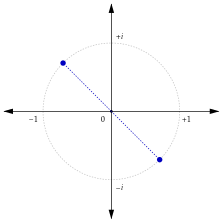 These complex numbers, two of eight values of 8√1, are mutually opposite

For a number and, generally, in any ring, the additive inverse can be calculated using multiplication by −1; that is, −n = −1 × n . Examples of rings of numbers are integers, rational numbers, real numbers, and complex numbers.

Additive inverse is closely related to subtraction, which can be viewed as an addition of the opposite:

Conversely, additive inverse can be thought of as subtraction from zero:

Hence, unary minus sign notation can be seen as a shorthand for subtraction with "0" symbol omitted, although in a correct typography there should be no space after unary "−".

In addition to the identities listed above, negation has the following algebraic properties:

For example, since addition of real numbers is associative, each real number has a unique additive inverse.

All the following examples are in fact abelian groups: