For the illegitime son of Haakon Haakonarson (1204–1263) by this name, by his mistress, Kanga the Young, see Haakon IV of Norway. 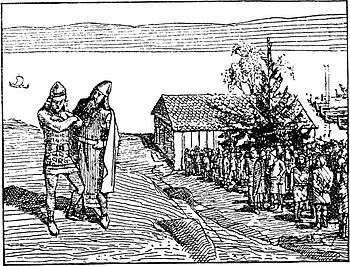 During the reign of King Haakon I of Norway, Sigurd had an influential position as the king's friend and adviser. He sought in particular to mediate between the king and the people during the king's attempt to introduce Christianity. After the death Haakon at the Battle of Fitjar (Slaget ved Fitjar på Stord) in 961, Harald Greycloak, the son of Eirik Bloodaxe and his brothers became kings of Norway.[3]

In autumn 962, Sigurd Håkonsson and his party were burnt to death by Harald Greycloak, while staying the night at a party at Aglo, in modern-day Skatval in the municipality of Stjørdal. Sigurd was killed as part of Harald's effort to reunite all of Norway under his rule. In 970, his killing was later avenged by Sigurd's son, Haakon Sigurdsson, who had become an ally of King Harold Bluetooth.[4]

The primary records are from the Heimskringla by Snorri Sturlasson.