Sigurd I Magnusson (c. 1090 – 26 March 1130), also known as Sigurd the Crusader (Old Norse: Sigurðr Jórsalafari, Norwegian: Sigurd Jorsalfar), was King of Norway from 1103 to 1130. His rule, together with his half-brother Øystein (until Øystein died in 1123), has been regarded by historians as a golden age for the medieval Kingdom of Norway. He is otherwise famous for leading the Norwegian Crusade (1107–1110), earning the eponym "the Crusader".[1][2]

Sigurd was one of the three sons to King Magnus III, the other two being Øystein and Olaf. They were all illegitimate sons of the king with different mothers. To avoid feuds or war, the three half-brothers co-ruled the kingdom from 1103. Sigurd would rule alone after Olaf died in 1115 and Øystein in 1123.[3]

Before being proclaimed King of Norway, Sigurd was also styled as King of the Isles and Earl of Orkney.[4] He would pass the Earl of Orkney title on to Haakon Paulsson, a son of Paul Thorfinnsson.[5]

Many historians have viewed Sigurd and Øystein's rule as a golden age for the medieval Kingdom of Norway. The country was able to flourish both in wealth and expansion,[6] Sigurd's participation in the crusades as well as gained international recognition and prestige.[7]

Coin thought to represent the co-rule of Øystein and Sigurd, and thus dated to before 1115

In 1098, Sigurd accompanied his father, King Magnus III, on his expedition to the Orkney Islands, Hebrides and the Irish Sea. He was made Earl of Orkney the same year, following the swift removal of the incumbent Earls of Orkney, Paul and Erlend Thorfinnsson. He was also, apparently, made King of the Isles in that same year, following the overthrow of their king by his father, Magnus. Although Magnus was not directly responsible for the death of the previous King of the Isles, he was the next ruler of the kingdom, most likely due to his conquest of the islands. This was the first time the kingdom had been under direct control by a Norwegian king. It is not certain whether Sigurd returned home with his father to Norway after the 1098 expedition. However, it is known that he was in Orkney when Magnus returned west in 1102 for his next expedition. While there, a marriage alliance was negotiated between Magnus and Muircheartach Ua Briain. He was High King of Ireland,[8] one of the most powerful rulers in Ireland, as well as the ruler of Dublin. Sigurd was to marry Muirchertach's daughter Bjaðmunjo, a young Irish princess and for a short period, Queen consort.[9]

When King Magnus was ambushed and killed in Ulaid by an Irish army in 1103, the 14-year-old Sigurd returned to Norway along with the rest of the Norwegian army leaving his child-bride behind. Upon arriving in Norway, he and his two brothers, Øystein and Olav, were proclaimed kings of Norway and would co-rule the kingdom together for some time. The expeditions conducted by Magnus were somewhat profitable to the Kingdom of Norway, as the many islands now under Norway would provide wealth, defences and manpower. However the Hebrides and Mann quickly re-asserted their independence after Magnus' death.[10] 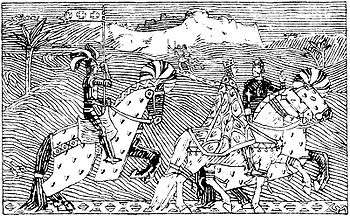 In 1107, Sigurd led the Norwegian Crusade to support the newly established Kingdom of Jerusalem which had been founded after the First Crusade. He was the first European king to lead a crusade, and his feats earned him the nickname Jorsalafari. Sigurd possessed a total force of about 5000 men in about 60 ships, as recorded by the sagas. The two kings, Øystein and Sigurd, initially disputed about who should lead the contingent and who should remain home to rule the kingdom. Sigurd was eventually chosen to lead the crusade, possibly because he was a more experienced traveler, having been on several expeditions with his father, Magnus III, to Ireland and islands outside Scotland.[1]

Sigurd fought in Lisbon, various Mediterranean islands and Palestine. He would often fight the enemies himself, amongst his loyal soldiers and kinsmen; they were continually victorious and vastly successful, gaining large amounts of treasure and booty. However, the loot probably never arrived in Norway, since Sigurd left almost everything he had gained in Constantinople. On his way to Jerusalem (Jorsalaland) he visited King Roger II of Sicily in his castle at Palermo.

Upon arriving in the Holy Land he was greeted by Baldwin I, King of Jerusalem. He received a warm welcome, and spent much time with the king. The two kings rode to the river Jordan River where Sigurd might have even been baptized. King Baldwin asked Sigurd to join him and Ordelafo Faliero, Doge of Venice in the capture of the coastal city of Sidon, which had been re-fortified by the Fatimids in 1098. The Siege of Sidon was a great success for the crusaders, and the city was conquered on 5 December 1110. Eustace Grenier was granted the Lordship of Sidon after the city was captured. By order of Baldwin and the Patriarch of Jerusalem, Ghibbelin of Arles, a splinter was taken from the True Cross and given to Sigurd after the siege, as a token of friendship and as a relic for his heroic participation in the crusades. Thereafter, King Sigurd returned to his ships and prepared to leave the Holy Land. They sailed north to the island of Cyprus, where Sigurd would stayed for a time. Sigurd then sailed to Constantinople (Miklagard) and entered the city through the gate called the Gold Tower, riding in front of his men. He stayed here for a while, meeting and spending much time with the Emperor. 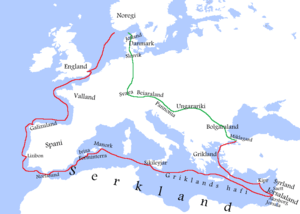 Route of the Norwegian Crusade taken by Sigurd the Crusader

Before leaving Constantinople, Sigurd gave all of his ships and many treasures away to the Byzantine Emperor. In return the emperor gave him many strong horses, for him and his fellow kinsmen. Sigurd planned to return to Norway over land, but there were few of his men who planned to return with him, many were to stay behind in the great city, to take up service for the emperor as part of his Varangian Guard. The trip would take many years, and he would visit many countries on the road. Sigurd traveled, in a trip that supposedly would take around three years, from Bulgaria (Bolgaraland) and through Hungary (Ungararíki), Pannonia, Schwabia (Sváva), and Bavaria (Beiaraland) where he met with the Emperor Lothar of the Holy Roman Empire (Rómaborg). He later arrived in Denmark where he was greeted by King Niels of Denmark who eventually gave him a ship so that he could sail all the way to Norway.

After returning to Norway in 1111, Sigurd came back to a flourishing and prosperous kingdom. King Eystein had used all his energy and willpower to create a strong and stable country. The church had especially gained .[11] During Sigurd's reign, the tithe (a 10% tax to benefit the church) was introduced in Norway, which greatly strengthened the church in the country. Sigurd also founded the diocese of Stavanger. He had been denied divorce by the bishop in Bergen, so he simply installed another bishop further south and had him perform the divorce.[12]

Sigurd made his capital in Konghelle (in the vicinity of Kungälv in present-day Sweden) and built a strong castle there. He also kept the relic given to him by King Baldwin, a splinter reputed to be from the True Cross. In 1123, Sigurd once again set out to fight in the name of the church, this time to Småland in Sweden. The inhabitants had reportedly renounced their Christian faith and were again worshiping Old Norse deities.[13]

Sigurd's skull was saved from the decaying St. Hallvard's church by a student in the 17th century. Since 1957 it has been interred in the wall of the royal mausoleum at Akershus Castle

Sigurd died in 1130 and was buried in Hallvard's church (Hallvardskirken) in Oslo.[14] Sigurd and his Queen Malmfred (a daughter of Grand Prince Mstislav I of Kiev and granddaughter of King Inge I of Sweden) had a daughter, Kristin Sigurdsdatter. He left had no legitimate male heirs. Magnus, his illegitimate son with his mistress Borghild Olavsdotter, became king of Norway. He shared the throne in an uneasy peace with another claimant, Harald Gille. This led to a power struggle following Sigurd's death between various illegitimate sons and other royal pretenders, which escalated into a lengthy and devastating civil war. This laid the ground-work for long feuds over who should rule the Kingdom of Norway in the 12th century and early 13th century.[15] [16] [17] [18]

The civil war era in Norway (Borgerkrigstida) lasted from 1130 until 1240 with were several interlocked conflicts of varying scale and intensity. The background for these conflicts were the unclear Norwegian succession laws, social conditions and struggles between various groups of noblemen fighting for power. There were two main parties, the Bagler and Birkebeiner. The rallying point regularly was a royal son, or a person claimed by his followers to be a royal son, who was set up as the head figure of the party in question, to oppose the rule of a king from the contesting party. In the traditions of succession of the day, there was little or no difference between a legitimate and an illegitimate son of a king. The competence and popularity of the potential heir was supposed to be the deciding factor.[19][20]

Most of the information gathered about the saga of Sigurd and his brothers is taken from the Heimskringla, written by Snorri Sturluson around 1225. The accuracy of this work is still debated by scholars. In the 19th century, Bjørnstjerne Bjørnson wrote an historical drama based on the life of the king, with incidental music composed by Edvard Grieg. Sigurd is also mentioned in various European sources.[21]