This article is about the Roman Catholic religious communities of this name. For the Anglican religious order of this name, see Sisters of Charity (Anglican).
Not to be confused with Missionaries of Charity. 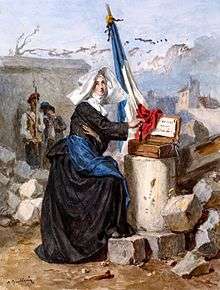 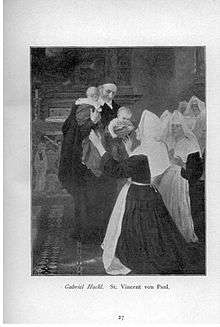 In 1633 Vincent de Paul, a French priest and Louise de Marillac, a widow, established the Company of the Daughters of Charity as a group of women dedicated to serving the "poorest of the poor". They set up soup kitchens, organized community hospitals, established schools and homes for orphaned children, offered job training, taught the young to read and write, and improved prison conditions. Louise de Marillac and Vincent de Paul both died in 1660, and by this time there were more than forty houses of the Daughters of Charity in France, and the sick poor were cared for in their own dwellings in twenty-six parishes in Paris. The French Revolution shut down all convents, but the society was restored in 1801 and eventually spread to Austria, Australia, Hungary, Ireland, Israel, Portugal, Turkey, Britain and the Americas.[1]

In 1809 American Elizabeth Ann Seton, founded the Sisters of Charity of St. Joseph's, adapting the rule of the French Daughters of Charity for her Emmitsburg, Maryland community.

In 1817, Mother Seton sent three Sisters were sent to New York City to establish an orphanage.[2] In 1829, four Sisters of Charity from Emmitsburg, Maryland traveled to Cincinnati, to open St. Peter’s Girl’s Orphan Asylum and School.[3] In 1850, the Sulpician priests of Baltimore successfully negotiated that the Emmitsburg community be united with the international community based in Paris. The foundations in New York and Cincinnati decided to become independent diocesan congregations. Six separate religious congregations trace their roots to the beginnings of the Sisters of Charity in Emmitsburg. In addition to the original community of Sisters at Emmitsburg (now part of the Vincentian order), they are based in New York City; Cincinnati, Ohio; Halifax, Nova Scotia; Convent Station, New Jersey; and Greensburg, Pennsylvania.

In 2011, the Daughters of Charity established The Province of St. Louise, bringing together the West Central, East Central, Southeast, and Northeast Provinces of the United States.[4] Los Altos Hills in California remains a separate province.[5]

Sisters of Charity Federation in the Vincentian-Setonian Tradition:

Many other groups called Sisters of Charity have also founded and operate educational institutions, hospitals and orphanages:

The most famous convent is at 14 Rue du Bac in Paris, France, born 1633. This was where Catholics believe Sister Catherine Laboure received the vision of Immaculate Mary on the eve of St. Vincent's feastday, 1830 and the dispensation of the Miraculous Medal.