Congregation of Our Lady of Charity of the Good Shepherd

The Congregation of Our Lady of Charity of the Good Shepherd (also known as the Sisters of the Good Shepherd) was founded in 1835 by Saint Mary Euphrasia Pelletier, at Angers, France. The Sisters belong to a Catholic international congregation of religious women dedicated to promoting the welfare of women and girls. The Congregation has a representative at the United Nations, and has spoken out against human trafficking.[1]

The Congregation of the Sisters of the Good Shepherd began as a branch of the Order of Our Lady of Charity (Ordo Dominae Nostrae de Caritate), founded in 1641 by Saint John Eudes, at Caen, France, and dedicated to the care, rehabilitation, and education of girls and young women in difficulty. Some of the girls were abandoned by their families or orphaned, some had turned to prostitution in order to survive. The Sisters provided shelter, food, vocational training and an opportunity for these girls and women to turn their lives around.[2] 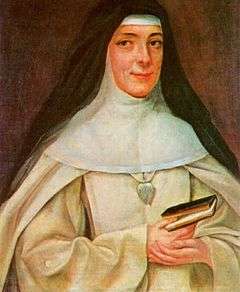 The Congregation of the Sisters of the Good Shepherd was founded by Rose Virginie Pelletier in Angers, France, in 1835. Rose was the daughter of a medical doctor and his wife, known for their generosity to the poor. At the age of eighteen, she joined the sisters of Our Lady of Charity in Tours and was given the name Sister Mary of St. Euphrasia. At the age of twenty-nine, she became superior of the convent.[2]

While superior at Tours, Sr. Mary Euphrasia formed a contemplative group, the Sisters Magdalen, (now known as the Contemplative Communities of the Sisters of the Good Shepherd), for penitent women who wished to live a cloistered life, but were ineligible to become Sisters of Our Lady of Charity.[3] On November 11, 1825, four young women began their novitiate with a short rule given to them by Archbishop de Montblanc of Tours,[4] which followed the Rule of the Third Order of Mount Carmel,[5] and earned their own way with intricate embroidery and production of altar bread.

In 1829, the Bishop of Angers, in France, requested a home be established in his diocese. Soon requests arrived from other cities. Each convent of the Order of Our Lady of Charity was independent and autonomous, with neither shared resources nor provisions for transferring personnel as needed. Sister Mary Euphrasia Pelletier envisioned a new governing structure that would free the sisters to respond more readily to requests for assistance. She appealed to Rome for approval to establish a new religious congregation, and the congregation of the Sisters of Our Lady of Charity of the Good Shepherd was founded in 1835, with the motherhouse in Angers.[2] 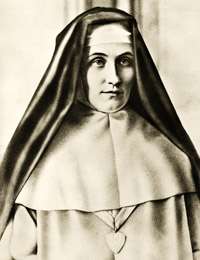 Additional convents were founded in El-Biar, Algeria (1843), Cairo, Egypt (1846), Limerick, Ireland (1848), Vienna, Austria (1853), Bangladore, India (1854), San Felipe, Chile (1855), Malta (1858), Leiderdorp, Holland (1860), and Rangoon, Burma (1866). Under her successor, Mother Mary Saint Peter Coudenhove, in twenty-four years, eighty-five houses were founded, and thirteen new provinces established: eleven in Europe, two in Africa, nine in North America, five in South America and one in Oceania.[5] The Ceylon (Sri Lanka) Mission was founded in 1869 and the convent continues to function as a religious community and school. From Ceylon, the Good Shepherd Sisters came to Singapore in 1939 and reached out into Malaysia in 1956.[7]

Starting around 1938, over time eleven monasteries of Our Lady of Charity in four countries joined the Sisters of the Good Shepherd.[8]

Since 1939 the Sisters have operated a convent in Singapore [9] They have since diversified into other ministries ranging from education to social welfare. In 1958 they opened Marymount Convent School, a girls' primary school.[10] 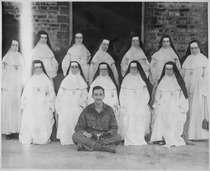 Thirteen Irish nuns who had been interned in the Rangoon City Jail by the Japanese, Burma, May 28, 1945.

In 1842 Mary Euphrasia sent the first five Sisters to Louisville, Kentucky, to establish houses in the United States. From Louisville new foundations spread across the U.S. From 1893 to 1910 authorities in Davenport, Iowa placed 260 underage girls in Good Shepherd Homes in Omaha, Peoria, Dubuque and elsewhere. Some of these girls were taken from brothels or dangerous home environments. This was seen as an alternative to sending them to the Iowa Industrial School for Girls in Mitchellville. According to Sharon E. Wood, "Throughout the 1880s and 1890s, reformers increasingly promoted private institutions as the best way to deal with problem girls."[11]

When the Sisters of the Good Shepherd arrived in St. Paul in 1868, their mission was to serve the needs of the homeless, wayward, and criminal girls and women. The Sisters developed two distinct programs: the first, was the care of girls who came from failing homes. The second served former prostitutes or delinquent girls, a majority of which were sent by the court. At the conclusion of their court-ordered stay, most women returned to their communities. However, they had the option to remain with the sisters in a semi-religious status, living at the House, praying, assisting with chores, and easily able to leave the House, or to become a cloistered “Magdalen” nun, who led a contemplative life within the convent at the House of the Good Shepherd.[12] Lovina Benedict opened a home in Des Moines under the auspices of the Women's Christian Temperance Union. It was based on the Good Shepherd Home she had visited in St. Paul, Minnesota. In Wood's view the Davenport use of the Good Shepherd Homes "anticipated the juvenile court system created by Progressive reformers a few years later".[11]

New York City Police Commissioner Theodore Roosevelt (1895) was a firm supporter of the work of the Sister of the Good Shepherd. From 1928 to 1975, the sisters operated Villa Loretto in Peekskill, New York.[13] On February 14, 2000 the four Provinces of Cincinnati, St. Louis, Washington and St. Paul merged to become the Province of Mid-North America.[8]

The Good Shepherd Sisters in Seattle ran a home for young women, most of whom were runaways, referred to the nuns by juvenile court, which labeled them "incorrigible." "The perception was that unwed mothers were sent there, but they weren't," said Sister Vera Gallagher. "In order to protect the girls, we really didn't tell the community much about what we were doing; and, because nobody knew, that was what they imagined. But they were just high-energy girls who had no place to go.".[14] Deborah Mullins, the youngest of twelve from a divorced family said, the Good Shepherd nuns "were the best thing that ever happened to me. ...They never screamed at you when you did something wrong. They'd be just totally disappointed in you, and that would make you know what you needed to do."[14] They ran a laundry, washing the sheets and tablecloths used by the railroad. The nuns gave the girls money to buy new outfits. "We weren't all rosaries and stations of the cross," said Sheilah Nichols Castor. "You had to be able to type, you had to be able to take shorthand, and you had to be able to cook something. When I came out, of course, I could only cook in batches of 30."[14]

In 1867, the sisters came to the Archdiocese of Boston, where they ran the House of the Good Shepherd on Mission Hill in Boston for nearly a century. The sisters moved their school to Marlborough, MA in 1964, where they provided a therapeutic residential program for girls until 1985.[15]

In 1993, the Woburn-based Cummings Foundation purchased the property and renovated it into the upscale independent and assisted living community, New Horizons. The sisters continue to live there today rent-free and offer residents daily Catholic Mass in Cardinal Cushing Chapel.

From the early 1890s to the 1960s, most Australian state capitals had a Magdalene asylum, also known as Magdalene laundry, a large convent where teenage girls were placed. According to James Franklin, the girls came from a variety of very disturbed and deprived backgrounds and were individually hard to deal with in many cases.[16] The asylums were initially established as refuges, with the residents free to leave. In the early 1900s, they reluctantly began to accept court referrals.[17] "They took in girls whom no-one else wanted and who were forcibly confined, contrary to the wishes of both the girls and the nuns."[16]

Like orphanages, they received almost no government funds. Laundry work was regarded as suitable as it did not require much training nor substantial capital expense. The nuns shared the conditions of the inmates, such as bland food, hard work, the confinement and the long periods of silence. Education for residents was either of poor quality or lacking altogether.[18] The state-run Parramatta Girls Home, which also had a laundry, had similar harsh conditions but a worse record for assaults.[19] The Good Shepherds were among the organisations running these institutions and laundries,[20] for example at Abbotsford Convent.

In 2004 the Australian Parliament released a report that included Good Shepherd laundries in Australia for criticism. "We acknowledge" [writes the Australian Province Leader Sister Anne Manning] "that for numbers of women, memories of their time with Good Shepherd are painful. We are deeply sorry for acts of verbal or physical cruelty that occurred: such things should never have taken place in a Good Shepherd facility. The understanding that we have been the cause of suffering is our deep regret as we look back over our history."[21]

The Congregation ran institutions which provided residential accommodation for children in Belfast, Derry/Londonderry and Newry in Northern Ireland. These institutions were the subject of the two-week Module 12 of the Northern Ireland Historical Institutional Abuse Inquiry into sexual and physical abuse of children, starting on 7 March 2016.[22]

The Congregation of Our Lady of Charity of the Good Shepherd was a cloistered order in the past, but is now mostly apostolic. Members follow the Rule of Saint Augustine. The contemplative and apostolic branches were once separate but have since merged . There are now two lifestyles in one institute.[6]

The sisters work in the areas of: community outreach, special education, social work, youth development, nurses, and post abortion counseling. They serve as administrator, psychologists, hospital chaplains, and prison ministers. The Sisters of the Good Shepherd are active in fighting against prostitution and human trafficking in poor countries of Asia. They also work in an international fair trade partnership with women and those in social and economic distress through Handcrafting Justice.

The contemplative sisters continue to be devoted to prayer and they support themselves by: making vestments, supplying altar breads to parishes, artistic works, creative computer work – designing graphics, cards and composing music.

As of 2010 the Congregation of the Sisters of the Good Shepherd was an international order of religious women in the Roman Catholic Church with its some 4,000 nuns work in 70 countries across the world.