The Discalced Carmelites or Barefoot Carmelites is a Catholic mendicant order with roots in the eremitic tradition of the Desert Fathers and Mothers. (Discalced is derived from Latin, meaning "without shoes".) The order was established in 1593, pursuant to the reform of the Carmelite Order of the Ancient Observance by two Spanish saints, Saint Teresa of Ávila and Saint John of the Cross.

The Discalced Carmelites are men and women, in religious consecration and lay people, who dedicate themselves to a life of prayer. The Carmelite nuns live in cloistered (enclosed) monasteries and follow a completely contemplative life. The Carmelite friars while following a contemplative life also engage in the promotion of spirituality through their retreat centres, parishes and churches. Lay people, known as the Secular Order, follow their contemplative call in their everyday activities. Devotion to the Virgin Mary is a characteristic of Carmelites and is symbolised by wearing the brown scapular.[1]

The first Carmelites came as pilgrims to Mount Carmel to live a solitary life-style. These early hermits were mostly laity, who lived an unofficial religious life of poverty, penance and prayer. Between 1206 and 1214, St. Albert, Patriarch of Jerusalem, brought the hermits on Mount Carmel together, at their request, into community. He wrote them a formula for living, which expressed their own intention and reflected the spirit of the pilgrimage to the Holy Land and of the early community of Jerusalem. They were also inspired by the prophet Elijah who had been associated with Mount Carmel. That influence can be seen by the words of Elijah, "I have been very zealous for the Lord, God of armies" (IKg 19:10) on the Carmelite crest. Within fifty years of receiving their rule the Carmelite hermits were forced to leave Mount Carmel and settled in Europe.[3] 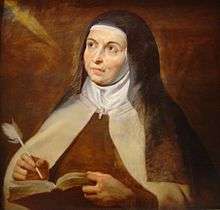 Saint Teresa of Ávila (1515–1582), Doctor of the Church and co-founder of the Discalced Carmelites.

A combination of political and social conditions that prevailed in Europe in the fourteenth and fifteenth century- the Hundred Years' War, Black Plague, and rise of the Renaissance and Humanist revival- adversely affected the Order. Although Carmel itself contributed a number of gifted and respected humanists, the trend which started out as a good thing occasioned a general decline in religious fervor. This factor, coupled with the decimation of the population and severe economic hardships, had a demoralizing effect. Many Carmelites and even whole communities succumbed to contemporary attitudes and conditions diametrically opposed to their original vocation. To meet this situation the Rule was "mitigated" several times. Consequently, the Carmelites bore less and less resemblance to the first hermits of Mount Carmel.[4]

St. Teresa of Avila considered the surest way to prayer to be a return to the Primitive Rule embodying Carmel's authentic vocation. A group of nuns assembled in her cell one September evening in 1560, taking their inspiration from the primitive tradition of Carmel and the discalced reform of St. Peter of Alcantara, a controversial movement within Spanish Franciscanism, proposed the foundation of a monastery of an eremitical kind.

With little resources and often bitter opposition, St. Teresa succeeded in 1562 in establishing a small monastery with the austerity of desert solitude within the heart of the city of Ávila, Spain, combining eremitical and community life. On 24 August 1562, the new Convent of St. Joseph was founded. Her rule, which retained a distinctively Marian character, contained exacting prescriptions for a life of continual prayer, safeguarded by strict enclosure and sustained by the asceticism of solitude, manual labor, perpetual abstinence, fasting, and fraternal charity. In addition to this, St. Teresa envisioned an order fully dedicated to poverty.[4]

Working in close collaboration with St. Teresa was St. John of the Cross, who with Anthony of Jesus founded the first convent of Discalced Carmelite friars in Duruelo, Spain on 28 November 1568.[5] 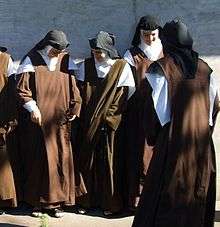 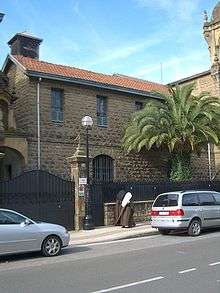 Two Discalced Carmelite nuns outside of their convent in Zarautz, the Basque Country

According to the Irish Province of the Order of Carmelites,[8] with regard to a religious order, the term charism refers to a characteristic which inspires the group and distinguishes it from other religious orders. The charism of each Christian religious family is the particular way in which its members are called to follow Christ. Since all Christians follow Christ, the charisms will have many elements in common, but the way in which these elements are emphasised gives each religious group its unique feel.

The heart of the Carmelite charism is prayer and contemplation. The quality of prayer determines the quality of the community life and the quality of the service which is offered to others. Prayer and contemplation for the Carmelite are not private matters between the individual and God but are to be shared with others since the charism is given for the whole world. Therefore, there is an emphasis in the order on the ministry of teaching prayer and giving spiritual direction.[8]

For a Carmelite, prayer is guided by the teachings and experience of St. Teresa of Ávila and St. John of the Cross, as well as the saints who have followed in their steps, such as St. Thérèse of the Child Jesus and of the Holy Face, Saint Elizabeth of the Trinity, St. Teresa of the Andes, and martyrs like Edith Stein (St. Teresa Benedicta of the Cross), Père Jacques and the sixteen Martyrs of Compiegne.

Fraternity, service and contemplation are essential values for all Carmelites. The hermits were forced to leave their home on Mount Carmel and settle in Europe. There they changed their style of life from hermits to friars. The major difference is that friars are called to serve the People of God in some active apostolate. Some congregations were founded for a specific work, but the Carmelite Order tries to respond to what it sees as the needs of the Church and the world which differ according to time and place, and so many friars work in parishes, schools, universities, retreat centres, prisons and hospitals. The kind of service in which each individual friar is involved will depend on the perceived needs of the people in whose midst he lives and his own particular talents.[8]

Each day is marked by silence for prayer. In addition to the daily celebration of the full Liturgy of the Hours, two hours are set aside for uninterrupted silent prayer. Communities are kept fairly small. The friars practice a broadly-based discipline of study.