The Skagerrak (Danish: [ˈsɡ̊æɪ̯ˀɐʁaɡ̊]; Norwegian: [ˈskɑːɡərɑk]; Swedish: [ˈskɑːɡərak]) is a strait running between the southeast coast of Norway, the southwest coast of Sweden, and the Jutland peninsula of Denmark, connecting the North Sea and the Kattegat sea area, which leads to the Baltic Sea.

The Skagerrak contains some of the busiest shipping routes in the world, with vessels from every corner of the globe. It also supports an intensive fishing industry.[1] The ecosystem is strained and negatively affected by direct human activities. Oslo is the only large city in the Skagerrak region.

The meaning of Skagerrak is most likely the Skagen Channel/Straight. Skagen is a town near the northern cape of Denmark (The Skaw). Rak means 'straight waterway' (compare the Damrak in Amsterdam); it is cognate with 'reach'.[2][3] The ultimate source of this syllable is the Proto-Indo-European root *reg-, 'straight'. Rak means 'straight' as in 'straight ahead' in both modern Norwegian and Swedish. "Råk" in modern Norwegian refers to a channel or opening of water in an otherwise ice covered body of water. There is no evidence to suggest a connection with the modern Danish word rak (meaning rabble or riff-raff). [See Kattegat for its etymology, in which gat means gate or hole.] 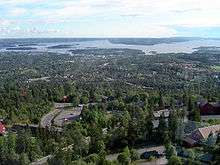 The Oslofjord inlet near Oslo is part of the Skagerrak strait.

The Skagerrak is 240 km (150 mi) long and between 80 and 140 km (50 and 87 mi) wide. It deepens toward the Norwegian coast, reaching over 700 metres at the Norwegian Trench. Some ports along the Skagerrak are Oslo and Kristiansand in Norway and Uddevalla and Strömstad in Sweden.

The Skagerrak has an average salinity of 30 practical salinity units, which is very low, close to that of brackish water, but comparable to most other coastal waters. The area available to biomass is about 3,600 km2 (1,400 sq mi) and includes a wide variety of habitats, from shallow sandy and stony reefs in Sweden and Denmark to the depths of the Norwegian trench.

The International Hydrographic Organization defines the limits of the Skagerrak as follows:[4]

German bunkers from WW II are still present along the coasts of Skagerrak. (Kjærsgård Strand in Denmark)

Older names for the combined Skagerrak and Kattegat were the Norwegian Sea or Jutland Sea; the latter appears in the Knýtlinga saga.

Until the construction of the Eider Canal in 1784 (a predecessor to the Kiel Canal), Skagerrak was the only way in and out of the Baltic Sea. For this reason the strait has had a heavy international seatraffic for centuries. After the industrialization, the traffic has only increased and today Skagerrak is among the busiest straits in the world. In 1862, the Thyborøn Channel at the Limfjord was constructed in Denmark, shortcutting passage through Skagerrak from the North Sea by going directly to the Kattegat. The Limfjord only supports minor transports though.

In both the world wars, the Skagerrak was strategically very important for Germany. The biggest sea battle of World War I, the Battle of Jutland, also known as the Battle of the Skagerrak, took place here May 31 to June 1, 1916. In World War II, the importance of controlling this waterway, the only sea access to the Baltic, was the motivation for the German invasion of Denmark and Norway, and the subsequent construction of the northern parts of the Atlantic Wall. Both of these naval engagements have contributed to the large number of shipwrecks in the Skagerrak.

A cargo ship on Skagerrak.

Skagerrak is a heavily trafficated strait, with c. 7,500 individual vessels (excluding fishing vessels) from all over the world visiting in 2013 alone. Cargo ships are by far the most common vessel in Skagerrak at c. 4,000 individual ships in 2013, followed by tankers, which are nearly half as frequent. When viewed in combination with the Baltic Sea area, ships from 122 different nationalities visited in 2013, with most of these carrying cargo or passengers within Europe, regardless of their flag state.[5]

Nearly all commercial vessels in Skagerrak are tracked by the Automatic Identification System (AIS).[6]

Skagerrak is popular for recreational activities in all three countries. There are many summer house residences and several marinas along the coasts.

The Skagerrak is habitat for approximately 2,000 marine species, many of them adapted to its waters. For example, a variety of Atlantic cod called the Skagerrak cod spawns off the Norwegian coast. The eggs are buoyant and the hatchlings feed on zooplankton. Juveniles sink to the bottom where they have a shorter maturity cycle (2 years). They do not migrate but remain local to Norwegian fjords.

The variety of habitats and the large volume of plankton on the surface support prolific marine life. Energy moves from the top to the bottom according to Vinogradov's ladder of migrations; that is, some species are benthic and others pelagic, but there are graded marine layers within which species move vertically for short distances. In addition, some species are benthopelagic, moving between surface and bottom. The benthic species include Coryphaenoides rupestris, Argentina silus, Etmopterus spinax, Chimaera monstrosa and Glyptocephalus cynoglossus. On the top are Clupea harengus, Scomber scombrus, Sprattus sprattus. Some species that move between are Pandalus borealis, Sabinea sarsi, Etmopterus spinax.

Skagerrak also holds a number of rare bubble reefs; biological reefs formed around cold seeps of geological carbohydrate outgassings, usually methane. These rare habitats are mostly known from the Danish waters of Skagerrak west of Hirtshals, but more might be discovered in future surveys.[9] Bubbly reefs are very rare in Europe and supports a very varied ecosystem.

With the centuries long heavy international seatraffic of Skagerrak, the seabed also holds an abundance of shipwrecks. Wrecks on shallow waters, provides a firm anchoring for several corals and polyps and explored wrecks have been revealed to support Dead Man's Fingers corals, Brittle stars and large wolffish.[10]

Scientists and environmental institutions have expressed concern about the increasing pressure on the ecosystem in Skagerrak. The pressure has already had negative impacts and is caused by cumulative environmental effects, of which direct human activities are only one piece of the puzzle. Climate change and ocean acidification are expected to have increasing impacts on the Skagerrak ecosystem in the future.[1]

Skagerrak and the North Sea receives considerable inputs of hazardous material and radioactive substances. Most is ascribed to long-range transport from other countries, but not all. Marine litter is also a growing problem. Until recently, waste water and sewage pouring into Skagerrak from settlements and industries was not treated at all. In combination with wash out of excessive nutrients from conventional farming, this has often led to large algae blooms.[11] 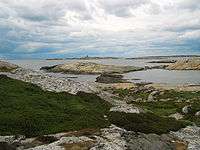 Kosterhavet National Park.
The two national parks of Ytre-Hvaler and Kosterhavet, forms a connected cross-border protection between Norway and Sweden.

There are several marine protections in Skagerrak, including: