The slave narrative is a type of literary work that is made up of the written accounts of enslaved Africans in Great Britain and its colonies, including the later United States, Canada, and Caribbean nations. Some six thousand former slaves from North America and the Caribbean gave accounts of their lives during the 18th and 19th centuries, with about 150 narratives published as separate books or pamphlets. In the U.S. during the Great Depression (1930s), more than 2,300 additional oral histories on life during slavery were collected by writers sponsored and published by the Works Progress Administration[1] (WPA) of President Franklin D. Roosevelt's administration. Most of the 26 audio-recorded interviews are held by the Library of Congress.[2]

Some of the earliest memoirs of captivity known in England and the British Isles were written by white Europeans and later Americans captured and sometimes enslaved in North Africa, usually by Barbary pirates. These were part of a broad category of "captivity narratives" by English-speaking Europeans. Beginning in the 18th century, these included accounts by colonists and American settlers in North America and the United States who were captured and held by Native Americans. Several well-known captivity narratives were published before the American Revolution, and they often followed forms established with the narratives of captivity in North Africa. Later North American accounts were by Americans captured by western tribes during 19th-century migrations.

For the Europeans and Americans, the division between captivity as slaves and as prisoners of war was not always clear. A broader name for the genre is "captivity literature". Given the problem of international contemporary slavery in the 20th and 21st centuries, additional slave narratives are being written and published.

Slave narratives by African slaves from North America were first published in England in the 18th century. They soon became the main form of African-American literature in the 19th century. Slave narratives were publicized by abolitionists, who sometimes participated as editors, or writers if slaves were not literate. During the first half of the 19th century, the controversy over slavery in the United States led to impassioned literature on both sides of the issue.

To present the reality of slavery, a number of former slaves, such as Harriet Tubman, Harriet Jacobs and Frederick Douglass, published accounts of their enslavement and their escapes to freedom. Lucy Delaney wrote an account that included the freedom suit waged by her mother in Missouri for their freedom. Eventually some 6,000 former slaves from North America and the Caribbean wrote accounts of their lives, with about 150 of these published as separate books or pamphlets.

Because of the participation of abolitionist editors, influential historians, such as Ulrich B. Phillips in 1929, suggested that, as a class, "their authenticity was doubtful." With increased emphasis on using the slaves' own accounts and the research of broader classes of information, since the late 20th century historians have more often validated the accounts of slaves about their own experiences.[3]

The slave narratives can be broadly categorized into three distinct forms: tales of religious redemption, tales to inspire the abolitionist struggle, and tales of progress. The tales written to inspire the abolitionist struggle are the most famous because they tend to have a strong autobiographical motif, such as in Frederick Douglass' autobiographies and Incidents in the Life of a Slave Girl by Harriet Jacobs (1861).

Before the American Civil War, some authors wrote fictional accounts of slavery to create support for abolitionism. The prime example is Uncle Tom's Cabin (1852) by Harriet Beecher Stowe. The success of her novel and the social tensions of the time brought a response by white southern writers, such as William Gilmore Simms and Mary Eastman, who published what were called anti-Tom novels. Both kinds of novels were bestsellers in the 1850s.

From the 1770s to the 1820s, the slave narratives generally gave an account of a spiritual journey leading to Christian redemption. The authors usually characterized themselves as Africans rather than slaves, as most were born in Africa.

Tales to inspire the abolitionist movement

From the mid-1820s, writers consciously chose the autobiographical form to generate enthusiasms for the abolitionist movement. Some writers adopted literary techniques, including the use of fictionalized dialogue. Between 1835 and 1865 more than 80 such narratives were published. Recurrent features include: slave auctions, the break-up of families, and frequently two accounts of escapes, one of which is successful. As this was the period of the forced migration of an estimated one million slaves from the Upper South to the Deep South through the internal slave trade, the experiences of auctions and break-up of families were common to many. 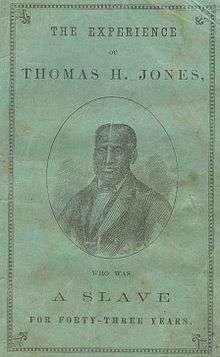 Following the defeat of the slave states of the Confederate South, the authors had less need to convey the evils of slavery. Some gave a sentimental account of plantation life and ended with the narrator adjusting to the new life of freedom. The emphasis of writers shifted conceptually toward a recounting of individual and racial progress rather than securing freedom.

During the Great Depression of the 1930s, the New Deal Works Projects Administration (WPA) employed writers and researchers from the Federal Writers' Project to interview and document the stories of African Americans who were former slaves. Most had been children when the Thirteenth Amendment was passed. Produced between 1936 and 1938, the narratives recount the experiences of more than 2,300 former slaves. Some interviews were recorded; 23 of 26 known audio recordings are held by the American Folklife Center of the Library of Congress.[2][7] The last interview of a former slave was with Fountain Hughes, then 101, in Baltimore, Maryland in 1949.[2] He was a grandson of a slave owned by President Thomas Jefferson at Monticello.

Some captives used their experiences as North African slaves to criticize slavery in the United States, such as William Ray in his book Horrors of Slavery. Slaves in North Africa suffered from many of the same conditions as their African counterparts in the United States, including hard labor, poor diet, and demeaning treatment. But, unlike those in America, slaves in North Africa could sometimes escape their condition by converting to Islam and adopting North Africa as their home, or in some cases could be ransomed by European powers. The Barbary pirates made a business out of capturing people at sea for ransom.

As slavery has been practised all over the world for millennia, some narratives cover places and times other than these main two. One example is the account given by John R. Jewitt, an English armourer enslaved for years by Maquinna of the Nootka people in the Pacific Northwest. The Canadian Encyclopedia calls his memoir a "classic of captivity literature"[8] and it is a rich source of information about the indigenous people of Vancouver Island.

Maria ter Meetelen (1704 in Amsterdam – fl. 1751), was a Dutch writer of an autobiography. Her biography is considered to be a valuable witness statement of the life of a former slave (1748).

A contemporary slave narrative is a recent memoir written by a former slave, or ghost-written on their behalf. Modern areas of the world in which slavery occurs include the Sudan, and two narratives, Escape from Slavery: The True Story of My Ten Years in Captivity – and My Journey to Freedom in America (2003) by Francis Bok and Edward Tivnan, and Slave by Mende Nazer and Damien Lewis, derive from slavery experiences in the Sudan.

A neo-slave narrative — a term coined by Ishmael Reed while working on his 1976 novel Flight to Canada and used by him in a 1984 interview[10] — is a modern fictional work set in the slavery era by contemporary authors or substantially concerned with depicting the experience or the effects of enslavement in the New World.[11] The works are largely classified as novels, but may pertain to poetical works as well.

Biographies of individuals with slave narratives