Soil texture is known as a qualitative classification instrument used both in the field and laboratory for agricultural soils to determine classes based on their physical texture. While classes are distinguished in the field and the class is then used to determine crop suitability and to approximate the soils responses to environmental and management conditions such as drought or calcium (lime) requirements. As a qualitative rather than a quantitative tool it is a fast, simple and effective means to assess a soil's physical characteristics. The USDA soil taxonomy and WRB soil classification systems use 12 classes whereas the UK-ADAS system uses just 11. 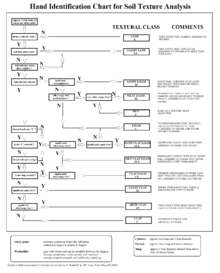 Hand analysis is a simple and effective means to rapidly assess and classify a soil's physical condition. Correctly executed, the procedure allows for rapid and frequent assessment of soil characteristics with little or no equipment. It is thus an extremely useful tool for identifying spatial variation both within and between plots (fields) as well as identifying progressive changes and boundaries between soil classes and orders.

The method involves taking a small sample of soil, sufficient to roll into a ball of approx 2.5 cm diameter, from just below the surface. Using a small drop of water or 'spit' the sample is then moistened to the sticky point (the point at which it begins to adhere to the finger). The ball is then molded to determine its work ability and its class according to the steps in the chart opposite. 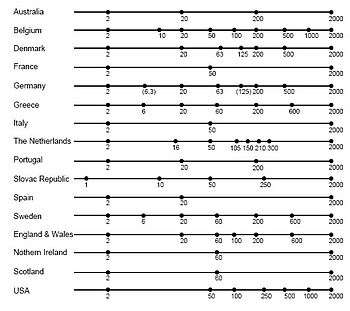 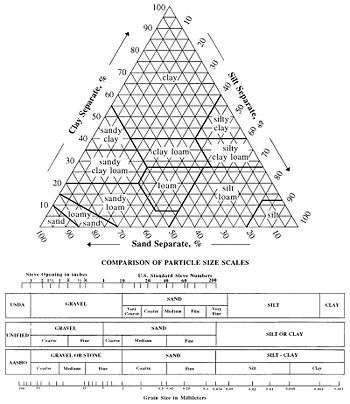 Soil textures are classified by the fractions of each soil separate (sand, silt, and clay) present in a soil. Classifications are typically named for the primary constituent particle size or a combination of the most abundant particles sizes, e.g. "sandy clay" or "silty clay". A fourth term, loam, is used to describe a roughly equal concentration of sand, silt, and clay, and lends to the naming of even more classifications, e.g. "clay loam" or "silt loam".

In the United States, twelve major soil texture classifications are defined by the USDA.[1]

The first classification, the International system, was first proposed by Albert Atterberg (1905), and was based on his studies in southern Sweden. Atterberg chose 20 μm for the upper limit of silt fraction because particles smaller than that size were not visible to the naked eye, the suspension could be coagulated by salts, capillary rise within 24 hours was most rapid in this fraction, and the pores between compacted particles were so small as to prevent the entry of root hairs. Commission One of the International Society of Soil Science (ISSS) recommended its use at the first International Congress of Soil Science in Washington in 1927. Australia adopted this system and according to Marshall (1947) its equal logarithmic intervals are an attractive feature worth maintaining. The USDA adopted its own system in 1938, and the FAO used the USDA system in the FAO-UNESCO world soil map and recommended its use.