Soil health is a state of a soil meeting its range of ecosystem functions as appropriate to its environment. Soil health testing is an assessment of this status.[1] Soil health depends on soil biodiversity (with a robust soil biota), and it can be improved via soil conditioning (soil amendment).

The term soil health is used to describe the state of a soil in:

Soil Health has partly if not largely replaced the expression "Soil Quality" that was extant in the 1990s. The primary difference between the two expressions is that soil quality was focused on individual traits within a functional group, as in "quality of soil for maize production" or "quality of soil for roadbed preparation" and so on. The addition of the word "health" shifted the perception to be integrative, holistic and systematic. The two expressions still overlap considerably.

The underlying principle in the use of the term “soil health” is that soil is not just an inert, lifeless growing medium, which modern farming tends to represent, rather it is a living, dynamic and ever-so-subtly changing whole environment. It turns out that soils highly fertile from the point of view of crop productivity are also lively from a biological point of view. It is now commonly recognized that soil microbial biomass is large: in temperate grassland soil the bacterial and fungal biomass have been documented to be 1–2 t (2.0 long tons; 2.2 short tons)/hectare and 2–5 t (4.9 long tons; 5.5 short tons)/ha, respectively.[3] Some microbiologists now believe that 80% of soil nutrient functions are essentially controlled by microbes.[4] If this is consistently true, than the prevailing Liebig nutrient theory model, which excludes biology, is perhaps dangerously incorrect for managing soil fertility sustainably for the future.

Using the human health analogy, a healthy soil can be categorized as one: 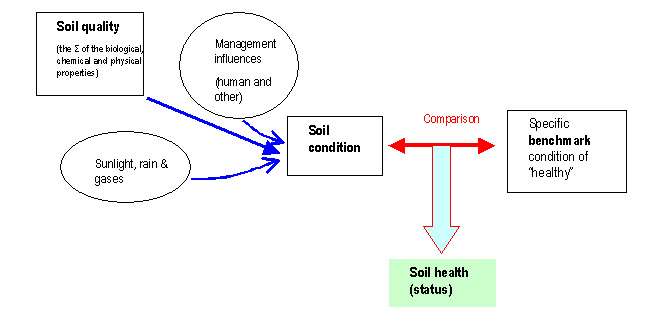 Soil health is the condition of the soil in a defined space and at a defined scale relative to a set of benchmarks that encompass healthy functioning. It would not be appropriate to refer to soil health for soil-roadbed preparation, as in the analogy of soil quality in a functional class. The definition of soil health may vary between users of the term as alternative users may place differing priorities upon the multiple functions of a soil. Therefore, the term soil health can only be understood within the context of the user of the term, and their aspirations of a soil, as well as by the boundary definition of the soil at issue.

Different soils will have different benchmarks of health depending on the “inherited” qualities, and on the geographic circumstance of the soil. The generic aspects defining a healthy soil can be considered as follows:

An unhealthy soil thus is the simple converse of the above.

On the basis of the above, soil health will be measured in terms of individual ecosystem services provided relative to the benchmark. Specific benchmarks used to evaluate soil health include CO2 release, humus levels, microbial activity, and available calcium.[5]

Soil health testing is spreading in the USA, Australia and S. Africa.[6] Cornell University has had a Soil Health Test since 2006 and offers many types of individual soil health tests as well as three different soil health testing packages.[7] The approach is to add into common chemical nutrient testing a biological set of factors not normally included in routine soil testing. The best example is adding biological soil respiration (CO2-Burst) as a test procedure; this has already been adapted to modern commercial labs in the past 10 years.

There is resistance among soil testing labs and university scientists to adding new biological tests, primarily since interpretation of soil fertility is based on models from "crop response" studies which match yield to test levels of specific chemical nutrients. These soil test methods have evolved slowly over the past 40 years and are backed by considerable effort. However, in this same time USA soils have also lost up to 75% of their carbon (humus), causing biological fertility to drop drastically. Many critics of the current system say this is sufficient evidence that the old soil testing models have failed us, and need to be replaced with new approaches. These older models have stressed "maximum yield" and " yield calibration" to such an extent that related factors have been overlooked. Thus, surface and groundwater pollution with excess nutrients (nitrates and phosphates) has grown enormously, and is reported presently (in the USA) to be the worst it has been since the 1970s, before the advent of environmental consciousness.[8] [9] [10]