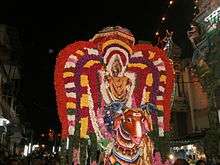 Sooranporu or Soorasamharam is a ritual folk performance that recreates the killing of Asuras by Lord Murugan.[1] It is performed in Tamil Nadu, Sri Lanka and the district of Palakkad in Kerala at temples dedicated to Murugan. The Soorasamharam festival is also celebrated in Thiruvannur Subramanya Swami temple in Kozhikode District kerala for more than a century in the name Sooranpada.[1][2] The 2016 date is November 5.[3]

The Sooranporu performance is based on the story of Murugan, also known as Skanda, as given in the Skandapurana. In the days preceding the performance the Skandapaurana is narrated in the temple. The performance ends with the killing of Soorapadman (or Padmasura) and his race which is depicted through the symbolic beheading of the four Asuras Anamughan, Panumughan, Simhamughan and Soorapadman.[1] The Asuras are beheaded by Murugan using his weapon the vel a kind of spear or javelin. For the performance the vel is specially consecrated and during the staging of the show it is ceremonially placed on the neck of the effigy after which the head is removed, depicting the beheading of the Asura.[1][4] Sooranporu is staged at the end of a week-long Kanda Sashti festival.[4][5]

Sooranporu is preceded by several ceremonies on the last day of the Kanda Sashti festival. Special pujas are conducted and the deity of Murugan is ritually anointed (abhishekam) and devotees seek the deity's darshan. In some parts of Tamil Nadu women devotees observe a six-day fast which they break at the end of the Sooranporu. In Palani, a procession of Lord Murugan (known here as Dandayuthapaniswamy) is taken down from the hill temple and led through the main thoroughfares of the town before the Sooranporu.[6][7]

In Tamil Nadu, Sooranporu is witnessed every year by large crowds of devotees and the state government and Indian Railways ply special buses and trains to facilitate their travel.[8] In Kerala's Palakkad district, Sooranporu is held in all the major Tamil settlements in the district.[1]