"Pazhani" redirects here. For the 2008 film, see Pazhani (film).
This article is about the pilgrim town in Tamil Nadu, India. For the temple, see Palani Murugan Temple. For the village in Iran, see Palani, Iran.

(Tamil:பழநி) Palani (or Pazhani) is a town and a municipality in Dindigul district, Tamil Nadu, located about 100 km north-west of Madurai and 100 km South-east of Coimbatore and 60 km west of Dindigul. The Palani Murugan Temple dedicated to Hindu war God Kartikeya is situated on a hill overlooking the town. The temple is visited by more than 7 million pilgrims each year. As of 2011, the town had a population of 70,467.

The town derives its name from the compounding of two Tamil words pazham meaning fruit and nee meaning you, a reference to poet Avvaiyar's song praising Lord Muruga which forms part of the legend of the Palani Murugan temple. Palani is pronounced using the retroflex approximant ɻ (ழ) and is thus also spelt using the 'zh' digraph as "Pazhani". 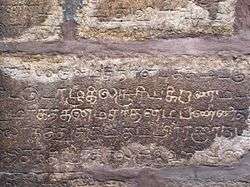 References exist to the place in ancient Tamil devotional texts. According to Hindu mythology, Sage Narada once visited the celestial court of Lord Shiva at Mount Kailash to present to Him a fruit, the gyana-pazham (literally, the fruit of knowledge), that held in it the elixir of wisdom. Upon Lord Shiva expressing his intention of dividing the fruit between his two sons, Ganesha and Karthikeya, the sage counselled against cutting it. He decided to award it to whomever of his two sons first circled the world thrice. Accepting the challenge, Lord Karthikeya started his journey around the globe on his mount peacock. However, Ganesha, who surmised that the world was no more than his parents Shiva and Shakti combined, circumambulated them. Pleased with their son's discernment, Lord Shiva awarded the fruit to Lord Ganesha. When Kartikeya returned, he was furious to learn that his efforts had been in vain. He left Kailash and took up his abode in Palani hills in South India. It is believed that Karthikeya felt the need to get matured from boyhood and hence chose to remain as a hermit and discarded all his robes and ornaments. He went into meditation to know about himself.[2]

Palani and most of Dindigul district were part of the Kongu Nadu region of the Tamil country. The northern part of the Palani and Oddanchatram taluks is held to have been part of the Anda Nadu sub-region, whereas the rest of the area constituted the Vaiyapuri Nadu. The area was under the influence of the rulers of Madurai and Coimbatore, at various points of time. In the 18th century, Hyder Ali and his son, Tippu Sultan ruled over the place before being annexed the British after the Third Anglo-Mysore War.

The back-drop to the town is formed by an offshoot of the Western Ghats, the Palani Hills, whereon lies the hill-station of Kodaikanal. The view within the town is dominated by the two hills, Sivagiri and Sakthigiri, on the former of which lies the temple. At the foot of the hills lie several lakes which drain to the Shanmuga river, a tributary of the Amaravathi River (Itself a tributary of Kaveri River) which takes its source on the slopes of the Palni Hills.

Palani is home to one of the most sacred shrines of the Lord Muruga, as worshiped in the Hindu sect of Kaumaram. The Thandayudhapani Temple dedicated to Lord Murugan, and regarded one of his Arupadai Veedu (Six Battle Camps), is situated here.[5] The temple is situated atop a hill known as Sivagiri. The Garbagriham is surmounted by a gold gopuram and the walls of the Garbagriham have numerous stone inscriptions describing offerings made by devotees to the temple. Steps are hewn into the rock, besides a wide path meant for the ascent of elephants, up the hill. In addition, a winch pulled railway with three tracks and a rope way are operational. A temple is dedicated to Muruga near the foot of the hill by the name of Thiru Avinankudi which actually forms a part of the six abodes of Muruga (Arupadaiveedu).

Besides this, right at the foot of the Sivagiri is a small shrine dedicated to the god Ganapathi, where he goes by the name Pada Vinayakar. It is common amongst the pilgrims to pay their obeisances at this shrine before commencing their ascent of the hill. Within the town is another temple dedicated to the Goddess Parvathi as Periyanayaki Amman. A short distance from the town is a temple dedicated to Shiva as Periya Avudaiyar. Near the Periya Nayaki Amman temple are two others - the Mariyamman Temple and the Perumal Temple. The former is particularly resorted to in times of epidemics, the goddess there being regarded as the protector against illnesses. The Kannadi Perumal Temple, dedicated to Vishnu, is a small temple situated on a hillock 9 km south of Palani, a short distance from the highway to Kodaikanal. 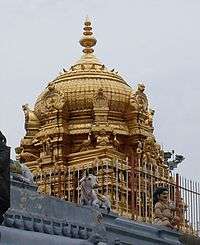 National Highway NH 209 connects Palani to Coimbatore and Bangalore. TNSTC buses connect the town to other parts of the state.

Palani is a part of the Coimbatore-Rameswaram MG line prior to the commencing of gauge conversion, which is yet under progress. On 20 November 2012, the Dindigul-Palani section of the line was completed, and the local railway station opened to railway traffic again. Currently, few passenger trains to Madurai , Thiruchendur and an express train to Chennai operate from the station. This train is extended to Pollachi.