This article is about the city. For the historical county in the Kingdom of Hungary named Sopron / Ödenburg, see Sopron (county).

Bilingual names in the Kingdom of Hungary after 1867

When the area that is today Western Hungary was a province of the Roman Empire, a city called Scarbantia stood here. Its forum was located where the main square of Sopron can be found today.

During the Migration Period, Scarbantia was believed to be deserted. By the time Hungarians arrived in the area, it was in ruins. In the 9th–11th centuries, Hungarians strengthened the old Roman city walls and built a castle. The town was named in Hungarian after a castle steward named Suprun. In 1153, it was mentioned as an important town.

In 1273, King Otakar II of Bohemia occupied the castle. Even though he took the children of Sopron's nobility with him as hostages, the city opened its gates when the armies of King Ladislaus IV of Hungary arrived. The king rewarded Sopron by elevating it to the rank of free royal town.

During the Ottoman occupation of Hungary, the Ottoman Turks ravaged the city in 1529, but did not occupy it. Many Hungarians fled from the occupied areas to Sopron, and the city's importance grew.

While the Ottomans occupied most of central Europe, the region north of lake Balaton remained in the Kingdom of Hungary (1538–1867) (captaincy between Balaton and Drava).

In 1676, Sopron was destroyed by a fire. The modern-day city was born in the next few decades, when Baroque buildings were built to replace the destroyed medieval ones. Sopron became the seat of the comitatus Sopron.

The town was the seat of the Ödenburg comitat near 1850.[1] After the compromise of 1867 and until 1918, the city (known with the dual bilingual name of Sopron - Ödenburg) [2] was part of the Habsburg-ruled Kingdom of Hungary. 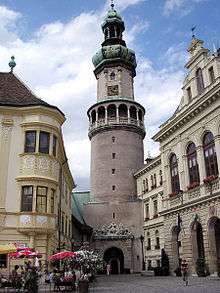 Following the breakup of the Austro-Hungarian Empire, ethnic Germans inhabited parts of four western Hungarian counties: Pozsony (Pressburg in German; Bratislava in Czech/Slovak), Vas (Eisenburg), Sopron (Ödenburg) and Moson (Wieselburg). These counties were initially awarded to Austria in the Treaty of Saint Germain (1919). After local unrest and Italian diplomatic mediation in the Venice Protocol,[3] Sopron's status as part of Hungary (along with that of the surrounding eight villages) was decided by a controversial, local plebiscite held on December 14, 1921, with 65% voting for Hungary. Since then Sopron has been called Civitas Fidelissima ("The Most Loyal Town", Hungarian: A Leghűségesebb Város), and the anniversary of the plebiscite is a city holiday. However, the western parts of Vas, Sopron and Moson counties did join Austria and today forms the Austrian federal state of Burgenland, while Pressburg/Pozsony was awarded to Czechoslovakia.

Sopron suffered greatly during World War II, it was bombed several times. The Soviet Red Army captured the city on April 1, 1945. On August 19, 1989, it was the site of the Pan-European Picnic, a protest on the border between Austria and Hungary, which was used by over 600 citizens of East Germany to escape from the GDR to the West. As the first successful crossing of the border it helped pave the way for the mass flight of East German citizens that led to the fall of the Berlin Wall on November 9, 1989.

During the Socialist era, the government tried to turn Sopron into an industrial city, but much of the medieval town center remains, allowing the city to remain an attractive site for tourists.

Today, Sopron's economy immensely benefits from the European Union. Having been a city close to nowhere, that is, to the Iron Curtain, Sopron now has re-established full trade relations to nearby Austria. Furthermore, after being suppressed during the Cold War, Sopron's German-speaking culture and heritage are now recognized again. As a consequence, many of the city's street-and traffic-signs are written in both Hungarian and German making it an officially bilingual city due to its proximity to the Austrian frontier. Visitors admire the large number of buildings in this city that reflect medieval architecture - rare in war-torn Hungary. Situated close to the Austrian border, Sopron receives many visitors from Vienna (70 kilometres (43 miles) away), and from Bratislava, Slovakia (77 km (48 mi) away), as well as from the United States, Great Britain, The Netherlands, Japan, and Scandinavia, who visit to take advantage of the excellent low-cost dental services offered: Sopron boasts so many dental clinics—more than 300—that the city is known as the "dental capital of the world."[4][5]

Sopron is a significant wine producing region, one of the few in Hungary to make both red and white wines. Grapes include Kékfrankos for red wine and Traminer (Gewürztraminer) for white wine. In climate it is similar to the neighbouring Burgenland wine region in Austria, and several winemakers make wine in both countries. Blue Frankish (= Kékfrankos, Blaufränkisch), Traminer, and Green Veltliner (= Zöld Veltelini, Grüner Veltliner) are well-known Sopron wines. Sopron's Blue Frankish and Pinot Noir wines are particularly prized.[6] 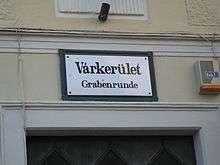 The architecture of the old section of town reflects its long history; walls and foundations from the Roman Empire are still common, together with a wealth of Medieval, Renaissance, and Baroque structures, often artistically decorated, showing centuries of stability and prosperity.

There is an old synagogue and other remains from the town's former Jewish community, which was expelled in the 16th century.

MFC Sopron was a football team based in Sopron. The successor of the club is Soproni VSE.

Sopron is twinned with: