This article is about common sorrel, Rumex acetosa. For other uses, see Sorrel (disambiguation).
Not to be confused with Hibiscus sabdariffa, the "sorrel of the Caribbean", used to make a beverage.
"Narrow-leaved sorrel" and variants redirect here. These terms may also refer to curled dock (R. crispus). 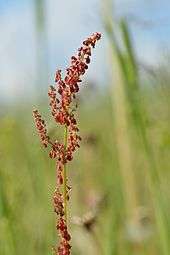 Common sorrel or garden sorrel (Rumex acetosa), often simply called sorrel, is a perennial herb in the family Polygonaceae. Other names for sorrel include spinach dock and narrow-leaved dock. It is a common plant in grassland habitats and is cultivated as a garden herb or leaf vegetable (pot herb). 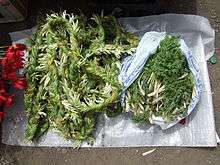 Sorrel (aveluk in Armenian) picked fresh from Mount Ara and braided before sale, for ease of drying and extended use

Sorrel is a slender herbaceous perennial plant about 60 centimetres (24 in) high, with roots that run deep into the ground, as well as juicy stems and edible, arrow-shaped (sagittate) leaves. The leaves, when consumed raw, have a sour taste. The lower leaves are 7 to 15 centimetres (2.8 to 5.9 in) in length with long petioles and a membranous ocrea formed of fused, sheathing stipules. The upper ones are sessile, and frequently become crimson. It has whorled spikes of reddish-green flowers, which bloom in early summer, becoming purplish.[2][3] The species is dioecious, with stamens and pistils on different plants.[3]

The leaves are eaten by the larvae of several species of Lepidoptera (butterfly and moth) including the blood-vein moth. 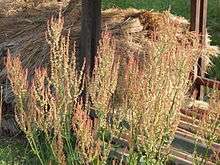 Rumex acetosa occurs in grassland habitats throughout Europe from the northern Mediterranean coast to the north of Scandinavia and in parts of Central Asia. It occurs as an introduced species in parts of North America.[4]

Common sorrel has been cultivated for centuries. The leaves may be puréed in soups and sauces or added to salads; they have a flavour that is similar to kiwifruit or sour wild strawberries. The plant's sharp taste is due to oxalic acid, which is mildly toxic.

In northern Nigeria, sorrel is known as yakuwa or sure (pronounced suuray) in Hausa or karassu in Kanuri. It is also used in stews usually in addition to spinach. In some Hausa communities, it is steamed and made into salad using kuli-kuli (traditional roasted peanut cakes with oil extracted), salt, pepper, onion and tomatoes. The recipe varies according to different levels of household income.

In Romania, wild or garden sorrel, known as măcriş or ştevie, is used to make sour soups, stewed with spinach, added fresh to lettuce and spinach in salads or over open sandwiches.

In Russia and Ukraine it is called shchavel (щавель, pronounced [ɕːɐˈvʲelʲ]) and is used to make soup called green borscht. It is used as a soup ingredient in other countries, too (e.g. Lithuania, where it is known as rūgštynė).

In Croatia and Bulgaria is used for soups or with mashed potatoes, or as part of a traditional dish containing eel and other green herbs.

In rural Greece it is used with spinach, leeks, and chard in spanakopita.

In the Flemish part of Belgium it is called zurkel and preserved pureed sorrel is mixed with mashed potatoes and eaten with sausages, meatballs or fried bacon, as a traditional winter dish.

In Vietnam it is called Rau Chua and is used to added fresh to lettuce and in salads for Bánh Xèo.

In Portugal, it is called azeda or azeda-brava (pronounced: [ɐˈzeðɐ], [ɐˈzeðɐ ˈβɾavɐ], "sour", "fierce sour"), and is usually eaten raw in salads or used to make soups. This is identical to its use in Brazil, under the name of azedinha ([ɐzeˈdʒĩɲɐ], "small/lovely tart").

In Albania it is called lëpjeta, the leaves are simmered and served cold marinated in olive oil, it is used in soups, and even as an ingredient for filling byrek pies (byrek me lakra).

Several subspecies have been named.[3] Not all are cultivated: