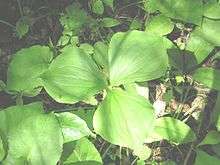 The perennial wildflower Trillium cernuum possesses three leaves that are sessile at the top of the stem.

In botany, sessility (meaning "sitting", used in the sense of "resting on the surface") is a characteristic of plant parts which have no stalk.[1][2] Flowers or leaves are borne directly from the stem or peduncle, and thus lack a petiole or pedicel. The leaves of the vast majority of monocotyledons lack petioles.

In addition to these plants, many insects practise sessile nesting practices. For example, Brachygastra scutellaris will build its nest starting with a sessile initiation onto a tree upon which the primary comb is built. Secondary combs are built randomly on this primary comb.[3]