This article is about the vegetable. For the software, see Celery (software).

Celery (Apium graveolens), a marshland plant in the family Apiaceae, has been cultivated as a vegetable since antiquity. Celery has a long hairy stalk. Depending on location and cultivar, either its stalks, leaves, or hypocotyl are eaten and used in cooking.

Celery seed is also used as a spice; its extracts are used in medicines. 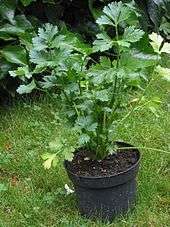 Celery leaves are pinnate to bipinnate with rhombic leaflets 3–6 cm (1.2–2.4 in) long and 2–4 cm broad. The flowers are creamy-white, 2–3 mm in diameter, and are produced in dense compound umbels. The seeds are broad ovoid to globose, 1.5–2 mm long and wide. Modern cultivars have been selected for solid petioles, leaf stalks.[2] A celery stalk readily separates into "strings" which are bundles of angular collenchyma cells exterior to the vascular bundles.[3]

First attested in English in 1664, the word "celery" derives from the French céleri, in turn from Italian seleri, the plural of selero, which comes from Late Latin selinon,[4] the latinisation of the Greek σέλινον (selinon), "celery".[5][6] The earliest attested form of the word is the Mycenaean Greek se-ri-no, written in Linear B syllabic script.[7] 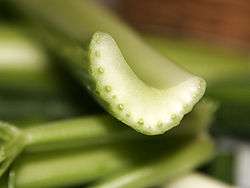 Cross-section of a 'Pascal' celery rib, the petiole

Celery was described by Carl Linnaeus in Volume One of his Species Plantarum in 1753.[8]

Head of celery, sold as a vegetable. Usually only the leaf stalks are eaten

The plants are raised from seed, sown either in a hot bed or in the open garden according to the season of the year, and, after one or two thinnings and transplantings, they are, on attaining a height of 15–20 cm (5.9–7.9 in), planted out in deep trenches for convenience of blanching, which is effected by earthing up to exclude light from the stems.

In the past, celery was grown as a vegetable for winter and early spring; it was perceived as a cleansing tonic, welcomed to counter the salt-sickness of a winter diet without greens based on salted meats. By the 19th century, the season for celery had been extended, to last from the beginning of September to late in April.[9]

In North America, commercial production of celery is dominated by the cultivar called 'Pascal' celery.[2] Gardeners can grow a range of cultivars, many of which differ from the wild species, mainly in having stouter leaf stems. They are ranged under two classes, white and red. The stalks grow in tight, straight, parallel bunches, and are typically marketed fresh that way, without roots and just a little green leaf remaining.

The stalks are eaten raw, or as an ingredient in salads, or as a flavoring in soups, stews, and pot roasts.

In Europe, another popular variety is celeriac (also known, incorrectly, as celery root), Apium graveolens var. rapaceum, grown because its hypocotyl forms a large bulb, white on the inside. The bulb could be kept for months in winter and mostly serves as a main ingredient in soup. It can also be ground up and used in salads. The leaves are used as seasoning; the small, fibrous stalks find only marginal use.[10][11][12]

The wild form of celery is known as "smallage". It has a furrowed stalk with wedge-shaped leaves, the whole plant having a coarse, earthy taste, and a distinctive smell. The stalks are not usually eaten (except in soups or stews in French cuisine), but the leaves may be used in salads, and its seeds are those sold as a spice.[13] With cultivation and blanching, the stalks lose their acidic qualities and assume the mild, sweetish, aromatic taste particular to celery as a salad plant.

Harvesting occurs when the average size of celery in a field is marketable; due to extremely uniform crop growth, fields are harvested only once. The petioles and leaves are removed and harvested; celery is packed by size and quality (determined by colour, shape, straightness and thickness of petiole, stalk and midrib length and absence of disease, cracks, splits, insect damage and rot). Under optimal conditions, celery can be stored for up to seven weeks between 0 to 2 °C (32 to 36 °F). Inner stalks may continue growing if kept at temperatures above 0 °C (32 °F). Freshly cut petioles of celery are prone to decay, which can be prevented or reduced through the use of sharp blades during processing, gentle handling, and proper sanitation.[14]

In the past, restaurants used to store celery in a container of water with powdered vegetable preservative, but it was found that the sulfites in the preservative caused allergic reactions in some people.[15] In 1986, the U.S. Food and Drug Administration banned the use of sulfites on fruits and vegetables intended to be eaten raw.[16] 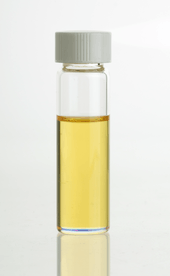 Celery is eaten around the world as a vegetable. In North America the crisp petiole (leaf stalk) is used. In Europe the hypocotyl is used as a root vegetable. The leaves are strongly flavoured and are used less often, either as a flavouring in soups and stews or as a dried herb. Celery, onions, and bell peppers are the "holy trinity" of Louisiana Creole and Cajun cuisine. Celery, onions, and carrots make up the French mirepoix, often used as a base for sauces and soups. Celery is a staple in many soups, such as chicken noodle soup.

In temperate countries, celery is also grown for its seeds. Actually very small fruit, these "seeds" yield a valuable volatile oil used in the perfume and pharmaceutical industries. They contain an organic compound called apiole. Celery seeds can be used as flavouring or spice, either as whole seeds or ground.

The seeds can be ground and mixed with salt, to produce celery salt. Celery salt can be made from an extract of the roots or using dried leaves. Celery salt is used as a seasoning, in cocktails (notably to enhance the flavour of Bloody Mary cocktails), on the Chicago-style hot dog, and in Old Bay Seasoning. 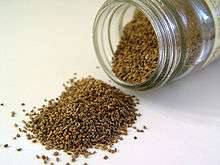 The use of celery seed in pills for relieving pain was described by Aulus Cornelius Celsus around AD 30.[17] Celery seeds contain a compound, 3-n-butylphthalide, that has been demonstrated to lower blood pressure in rats.[18]

Celery juice significantly reduced hypertension in 87.5% of patients (14 of 16) tested.[19] Another study showed the same effect on hypertension associated with pregnancy.[20]

Bergapten in the seeds can increase photosensitivity, so the use of essential oil externally in bright sunshine should be avoided. The oil and large doses of seeds should be avoided during pregnancy, as they can act as a uterine stimulant. Seeds intended for cultivation are not suitable for eating as they are often treated with fungicides.

Celery is used in weight-loss diets, where it provides low-calorie dietary fibre bulk. Celery is often incorrectly thought to be a "negative-calorie food," the digestion of which burns more calories than the body can obtain. In fact, eating celery provides positive net calories, with digestion consuming only a small proportion of the calories taken in.[21]

Celery is among a small group of foods (headed by peanuts) that appear to provoke the most severe allergic reactions; for people with celery allergy, exposure can cause potentially fatal anaphylactic shock.[22] The allergen does not appear to be destroyed at cooking temperatures. Celery root—commonly eaten as celeriac, or put into drinks—is known to contain more allergen than the stalk. Seeds contain the highest levels of allergen content. Exercise-induced anaphylaxis may be exacerbated. An allergic reaction also may be triggered by eating foods that have been processed with machines that have previously processed celery, making avoiding such foods difficult. In contrast with peanut allergy being most prevalent in the US, celery allergy is most prevalent in Central Europe.[23] In the European Union, foods that contain or may contain celery, even in trace amounts, must be clearly marked as such.[24]

Polyynes can be found in Apiaceae vegetables like celery, and their extracts show cytotoxic activities.[25][26]

Apiin and apigenin can be extracted from celery and parsley. Lunularin is a dihydrostilbenoid found in common celery.

Some aromatic compounds of celery leaves and stalks are reported as butylphthalide and Sedanolide.

Selinunte didrachm coin bearing a selinon (celery) leaf, circa 515-470 BC.

Daniel Zohary and Maria Hopf[27] note that celery leaves and inflorescences were part of the garlands found in the tomb of pharaoh Tutankhamun (died 1323 BC), and celery mericarps dated to the seventh century BC were recovered in the Heraion of Samos. However, they note "since A. graveolens grows wild in these areas, it is hard to decide whether these remains represent wild or cultivated forms." Only by classical times is it certain that celery was cultivated.

M. Fragiska mentions an archeological find of celery dating to the 9th century BC, at Kastanas; however, the literary evidence for ancient Greece is far more abundant. In Homer's Iliad, the horses of the Myrmidons graze on wild celery that grows in the marshes of Troy, and in Odyssey, there is mention of the meadows of violet and wild celery surrounding the cave of Calypso.[28]

In the Capitulary of Charlemagne, compiled ca. 800, apium appears, as does olisatum, or alexanders, among medicinal herbs and vegetables the Frankish emperor desired to see grown.[29] At some later point in medieval Europe celery displaced alexanders.

Celery's late arrival in the English kitchen is an end-product of the long tradition of seed selection needed to reduce the sap's bitterness and increase its sugars. By 1699, John Evelyn could recommend it in his Acetaria. A Discourse of Sallets: "Sellery, apium Italicum, (and of the Petroseline Family) was formerly a stranger with us (nor very long since in Italy) is an hot and more generous sort of Macedonian Persley or Smallage...and for its high and grateful Taste is ever plac'd in the middle of the Grand Sallet, at our Great Men's tables, and Praetors feasts, as the Grace of the whole Board".[30]

Celery makes a minor appearance in colonial American gardens; its culinary limitations are reflected in the observation by the author of A Treatise on Gardening, by a Citizen of Virginia that it is "one of the species of parsley."[31] Its first extended treatment in print was in Bernard M'Mahon's American Gardener's Calendar (1806).[32] After the mid-19th century, continued selections for refined crisp texture and taste brought celery to American tables, where it was served in celery vases to be salted and eaten raw. 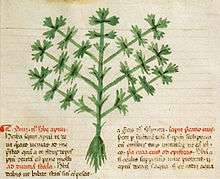 A chthonian symbol among the ancient Greeks, celery was said to have sprouted from the blood of Kadmilos, father of the Cabeiri, chthonian divinities celebrated in Samothrace, Lemnos, and Thebes. The spicy odour and dark leaf colour encouraged this association with the cult of death. In classical Greece, celery leaves were used as garlands for the dead, and the wreaths of the winners at the Isthmian Games were first made of celery before being replaced by crowns made of pine. According to Pliny the Elder[33] in Achaea, the garland worn by the winners of the sacred Nemean Games was also made of celery.[28] The Ancient Greek colony of Selinous (Greek: Σελινοῦς, Selinous), on Sicily, was named after wild parsley that grew abundantly there; Selinountian coins depicted a parsley leaf as the symbol of the city.

The perennial BBC television series Doctor Who featured the Fifth Doctor (played by Peter Davison, from 1981–84), who wore a sprig of celery as a corsage.

The name "celery" retraces the plant's route of successive adoption in European cooking, as the English "celery" (1664) is derived from the French céleri coming from the Lombard term, seleri, from the Latin selinon, borrowed from Greek.[34]