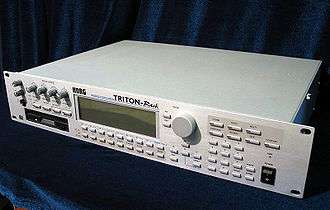 A sound module is an electronic musical instrument without a human-playable interface such as a keyboard. Sound modules have to be operated using an externally connected device, which is often a MIDI controller, of which the most common type is the musical keyboard (although wind controllers and guitar controllers are also used). Controllers are devices that provides the human-playable interface and may or may not produce sounds of its own. Another common way of controlling a sound module is through a sequencer, which is computer hardware or software designed to record and play back control information for sound generating hardware. Connections between sound modules, controllers, and sequencers are generally made with MIDI (Musical Instrument Digital Interface), which is a standardized protocol designed for this purpose.

Because most electronic instruments are designed in a modularized way, manufacturers often release a sound module version of their fully integrated instruments. A sound module may have all the other features of the controller-equipped version, but it often has a smaller display or limited programming controls. In this case, sounds can be loaded through MIDI or external media. In some cases, sound modules have expanded capacity for sounds in comparison to the controller-equipped version. In the 2010s, hardware sound modules have largely been replaced with software equivalents, due to the increased speed and processing power of computers and their decrease in price. Nevertheless, some DJs and EDM musicians continue to use vintage 1980s sound modules for their unique sound.

A sound module may also be referred to as "tone generator", "synth module", "MIDI sound generator" or "rack-mount synthesizer".

A sound module has the same advantages over a fully integrated instrument as does any system with a modularized design: