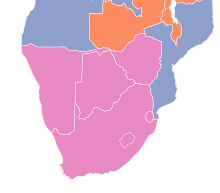 South Africa has a 'hybrid' or 'mixed' legal system, formed by the interweaving of a number of distinct legal traditions: a civil law system inherited from the Dutch, a common law system inherited from the British, and a customary law system inherited from indigenous Africans (often termed African Customary Law, of which there are many variations depending on the tribal origin). These traditions have had a complex interrelationship, with the English influence most apparent in procedural aspects of the legal system and methods of adjudication, and the Roman-Dutch influence most visible in its substantive private law.[1] As a general rule, South Africa follows English law in both criminal and civil procedure, company law, constitutional law and the law of evidence; while Roman-Dutch common law is followed in the South African contract law, law of delict (tort), law of persons, law of things, family law, etc. With the commencement in 1994 of the interim Constitution, and in 1997 its replacement, the final Constitution, another strand has been added to this weave. 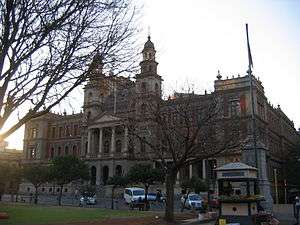 The Palace of Justice in Pretoria, seat of the North Gauteng High Court
Main article: Courts of South Africa

Until 1795, the province of Holland was a sovereign independent state. Together with the other territories of the Netherlands, it was organised into a fairly free commonwealth of nations known as the Republiek der Vereenigde Nederlanden (Republic of the United Netherlands).[5] It was originally a rural territory, but the rapid speed of development during the 15th century changed it into a trading centre. The old Germanic customary law was no longer able to settle the disputes which arose in everyday trade, and the Dutch turned to the more advanced Roman law. They took it over and changed it to suit their lives, to such an extent that at the beginning of the 17th century, the great Dutch jurist Hugo de Groot (Grotius) could describe this fusion (or joining together) of Dutch and Roman principles as a “new” legal system with its own contents. This was how Roman-Dutch Law began. It was later to form the basis of the present common law in South Africa in a form that had been expanded by what were called the placaaten which was the legislation of that period.[6]

With the failure of the successive Dutch, British and Apartheid governments to record the laws of pre-colonial southern Africa, there is a dearth of information about laws prior to the colonisation of South Africa. However, the current South African legal system has recognised the significance of these, and they have been incorporated into the overall legal system, functioning as district/local courts where appropriate.

From the 6 April 1652 landing of the Dutch in the Cape of Good Hope, the Roman-Dutch legal system and its legislation and laws took increasing hold, holding sway until the Union of South Africa as a dominion of the British Empire was formed on 31 May 1910. Even after this and to date, wherever British law does not stand, Roman-Dutch law forms the bedrock to which South Africa turns in its search for clarity in its law.

From the union of the Cape Colony, Natal, Transvaal and Orange Free State in 1910 as a dominion within the British Empire called the Union of South Africa, and prior to the formation of the Republic of South Africa in 1961, much of English law was incorporated into or formed the basis of South African law. However the jury system was not adopted,and unlike most countries that adopted British common-law, cases are decided by a judge alone. English law and the Roman-Dutch law which held sway prior to this period form the bedrock to which South Africa even now turns in its search for clarity in its law, and where there is a vacuum in its law.