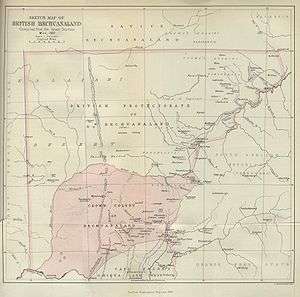 An 1887 map showing the Crown colony of Bechuanaland (shaded pink) and the Bechuanaland Protectorate (pink border). This was prior to the extension northward to include Ngamiland in 1890

The Bechuanaland Protectorate /bɛˈtʃwɑːnəˌlænd/ was a protectorate established on 31 March 1885, by the United Kingdom of Great Britain and Ireland in southern Africa. It became the Republic of Botswana on 30 September 1966.[1]

Scottish missionary John Mackenzie (1835–99), who lived at Shoshong from 1862–76, "believed that the Ngwato and other African peoples with whom he worked were threatened by Boer freebooters encroaching on their territory from the south." He campaigned for the establishment of what became the Bechuanaland Protectorate, to be ruled directly from Britain.

Austral Africa: Losing It or Ruling It is Mackenzie’s account of events leading to the establishment of the protectorate. Influenced by Mackenzie, in January 1885 the British cabinet decided to send a military expedition to South Africa to assert British sovereignty over the contested territory. Sir Charles Warren (1840–1927) led a force of 4,000 imperial troops north from Cape Town. After making treaties with several African chiefs, Warren announced the establishment of the protectorate in March 1885. Mackenzie accompanied Warren, and Austral Africa contains a detailed account of the expedition. [2]

The British government originally expected to turn over administration of the protectorate to Rhodesia or South Africa, but Tswana opposition left the protectorate under British rule until its independence in 1966.

The Bechuanaland Protectorate was technically a protectorate rather than a colony. Originally the local Tswana rulers were left in power, and British administration was limited to a police force to protect Bechuanaland's borders against other European colonial ventures. But on 9 May 1891 the British Government gave the administration of the protectorate to the High Commissioner for South Africa, who started to appoint officials in Bechuanaland, and the de facto independence of Bechuanaland ended.[4]

The protectorate was administered from Mafeking, creating an unusual situation, the capital of the territory being located outside of the territory. The area of Mafeking (from 1980 with the incorporation into Bophuthatswana Mafikeng, since 2010 Mahikeng), was called 'The Imperial Reserve'. In 1885, when the protectorate was declared, Bechuanaland was bounded to the north by the latitude of 22° south. The northern boundary of the protectorate was formally extended northward by the British to include Ngamiland, which was then dominated by the Tawana state, on 30 June 1890. This claim was formally recognised by Germany the following day by Article III of the Heligoland-Zanzibar Treaty, which confirmed the western boundary of the British protectorate of Bechuanaland and the German protectorate of South-West Africa and also created the Caprivi strip inherited by modern Namibia:

In Southwest Africa, Germany's sphere of influence is demarcated thus:

British officials did not arrive in the Ngamiland region until 1894.

This territory was originally claimed by Matabeleland. In 1887 Samuel Edwards, working for Cecil Rhodes, obtained a mining concession, and in 1895 the British South Africa Company attempted to acquire the area, but three Tswana chiefs visited London to protest and were successful in fending off the BSAC. This territory forms the modern North-East District of Botswana.

The most powerful ruler was King Khama III, who had strong support from the British government, and was especially popular among evangelicals in Britain. He collaborated closely with the British military, and kept his vast, but underpopulated lands independent from intruders from South Africa.[5]

Sekgoma II's reign lasted only a year or so, leaving his son Seretse, who at the time was an infant, as the rightful heir to the chieftainship (Tshekedi was not in line to be chief since he did not descend from Khama's oldest son Sekgoma II). So in keeping with tradition, Tshekedi acted as regent of the tribe until Seretse was old enough to assume the chieftainship. The transfer of responsibility from Tshekedi to Seretse was planned to occur after Seretse had returned from his law studies overseas in Britain.

Tshekedi's regency as acting chief of the Bamangwato is best remembered for his expansion of the mephato (regiments) to build primary schools, grain silos, and water reticulation systems, for his frequent confrontations with the British colonial authorities over the administration of justice in Ngwato country, and for his efforts to deal with a major split in the tribe after Seretse married a white woman, Ruth Williams, while studying law in Britain.

Tshekedi opposed the marriage on the grounds that under Tswana custom a chief could not marry simply as he pleased. He was a servant of the people; the chieftaincy itself was at stake. Seretse would not budge in his desire to marry Ruth, and he did, while exiled in Britain in 1948. Tribal opinion about the marriage basically split evenly along demographic lines - older people went with Tshekedi, the younger with Seretse. In the end, British authorities exiled both men (Tshekedi from the Bamangwato territory, Seretse from the Protectorate altogether). Rioting broke out and a number of people were killed.

Seretse and Ruth were allowed to return to the Protectorate and Seretse and Tshekedi were able to patch things up a bit between themselves. By now though, Seretse saw his destiny not as chief of the Bamangwato tribe, but rather as leader of the Botswana Democratic Party and as President of the soon-to-be independent nation of Botswana in 1966. He would remain Botswana's President until his death from pancreatic cancer in 1980.

The Bechuanaland Protectorate was one of the "High Commission Territories", the others being Basutoland (now Lesotho) and Swaziland. The High Commissioner had the authority of a governor. The office was first held by the governor of the Cape Colony, then by the Governor-General of South Africa, then by British High Commissioners and Ambassadors to South Africa until independence. Consequently, administration was headed in each territory by a Resident Commissioner, who thus had approximately the same functions of a Governor but somewhat less authority. 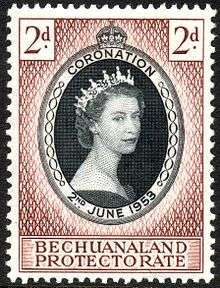 A rare Bechuanaland Border Police canteen token.
This article is issued from Wikipedia - version of the 12/2/2016. The text is available under the Creative Commons Attribution/Share Alike but additional terms may apply for the media files.