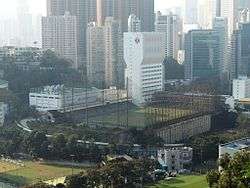 South China Stadium (Chinese: 南華球場), also known as Caroline Hill Stadium, is a multi-use stadium in Hong Kong. It is currently used mostly for sports and is owned by South China AA. Originally designed for football matches and to accommodate 12,000 spectators when it was opened in 1953.

The Hong Kong Jockey Club Charities Trust announced on 25 October 2012 that the South China Athletic Association's facilities will undergo a major redevelopment with funding of HK$126 million from the club. New or improved facilities will include a third-generation artificial turf pitch with a covered spectator stand.[1]

It is located on Caroline Hill Road, Causeway Bay. It is very near the Hong Kong Stadium.