Hong Kong Stadium is the main sports venue of Hong Kong. Redeveloped from the old Government Stadium, it reopened as Hong Kong Stadium in March 1994. It has a maximum seating capacity of 40,000, including 18,257 at the main level, 3,153 at executive level, 18,507 upper level seats and 57 seats for wheelchair users.

The stadium is located in So Kon Po, Hong Kong Island, a valley near Causeway Bay. Most international football matches held in Hong Kong are held at this stadium. It is also the location for the Hong Kong Sevens rugby sevens tournament. Hong Kong Stadium also hosted the Rugby World Cup Sevens twice, in 1997 and 2005.

So Kon Po was formerly the burial ground for the 1918 fire at Happy Valley Racecourse. Then the Hong Kong Government moved all the tombs to Aberdeen. The old Government Stadium was a U-shaped constructed by 1953 and had a capacity of 28,000[3] with partially covered seating. It witnessed the best times of Hong Kong football in the 60s and 70s. At the time, the stadium would be packed full of spectators when a top of the league clash happened and a red flag would be hoisted. Eager spectators without tickets would climb the hill behind the stadium to see the game.

The old Government Stadium was only partially covered, without sufficient seats or lighting systems. In the 90s, the Royal Hong Kong Jockey Club proposed a reconstruction plan so that Hong Kong can have a world class sports stadium.

Even before the reconstruction, the Government Stadium was Hong Kong's most important sports venue, with a clay running track around the football field. As the focus on the design was for football only, the track went to 450m, 50m longer than standard. Numerous schools held their athletic meetings here.

In the early 1990s, the Government Stadium was reconstructed into a 40,000-seat rectangular stadium. No running track was built due to the restricted land size. This forced the schools to look for alternative venues.

The stadium's management contract was won by Wembley International, a foreign subsidiary of Wembley Stadium, against strong competition, in March 1994.

From the first day there have been serious problems with the pitch. The owners of the stadium, the Urban Council, were disappointed.[4] It came under fire from local football officials, sports promoters and even Manchester United manager Alex Ferguson, who said, before the exhibition match between Manchester United and South China AA on 20 July 1997, "The pitch is cutting up. The surface is just sand-based and the turf doesn't hold well. Injuries can occur."[5]

The government had hoped that the stadium could be used as a music concert venue in order to bring in more rental income. But nearby citizens complained endlessly about 'noise levels', leading to restrictions on noise levels that effectively rendered the stadium unsuitable for concerts. This reduced greatly the income levels of the stadium and the management company, Wembley, ran into financial troubles.

Wembley's management tenure at the stadium was abruptly terminated by the Provisional Urban Council (PUC) on 26 May 1998. PUC also asked Urban Services Department (USD) to assume temporary management of the Hong Kong Stadium and has also agreed to USD's proposals to returf the entire pitch of the Hong Kong Stadium.[6] The fundamental issue between the parties was the care and maintenance of the stadium pitch, but also a complaint about an unauthorized bungy jump by Canadian Paul G. Boyle.

In the end, the Hong Kong government was judged to have wrongfully terminated the management agreement and had to pay over HK$20million in damages to Wembley Plc.[7]

Hong Kong Stadium is now managed by the Leisure and Cultural Services Department of Hong Kong, after the Urban Council was disbanded.

The ground has hosted matches of the Hong Kong International Cricket Sixes since 1996 to 1997.

In 2013, during the Barclays Asia Trophy, Sunderland boss Paolo Di Canio described the pitch as 'a killer' while Manchester City defender Matija Nastasic is injured on the mudheap pitch, but the young Serbian's injury was caused by a kick to the ankle according to Manchester City FC manager Manuel Pellegrini, who refused to blame the muddy pitch. But Tottenham Hotspurs manager Andre Villas-Boas was in open revolt after seeing Jan Vertonghen, a first-choice defender, pick up an ankle injury playing the surface. "If I can be sincere, I would prefer not to play, but this is the reality that we have to face," said the Portuguese on the eve of his side's friendly against South China AA.[8][9] Manchester United then cancelled their public training session at the stadium on Sunday amid concerns over the playing surface, did not want to further damage the playing surface or risk any injuries to their players, ahead of their exhibition match with Kitchee SC on 29 July.[10]

In 2015, with support from the Jockey Club, the pitch was completely returfed. The existing turf and soil was removed, the irrigation and drainage systems replaced, and new turf laid.[12]

Alan Tam held a concert at the Hong Kong Stadium from 22 April to 24 April 1994. It was the only solo concert held here. 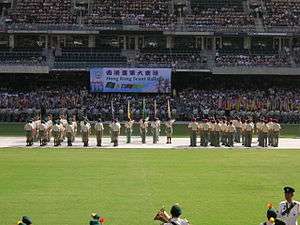 The only time the venue is used for live events is the Extravaganza of China Olympic Gold Medallists celebration show for the Chinese gold medallists.[13]

Bon Jovi played a concert at the stadium on September 25, 1993 during I'll Sleep When I'm Dead Tour. It was their first concert in Hong Kong.

Canadian Paul G. Boyle illegally bungy jumped from the roof of the Hong Kong Stadium on the morning of Friday 24 May 1996. He was not arrested but was given a lifetime ban from all Urban Council facilities.[14]

On 1 November 2008, the ground became the first stadium outside of Australia or New Zealand to host a match of the Bledisloe Cup, a rugby competition between Australia and New Zealand. New Zealand won the match, 19-14.

On 1 June 2013, the British and Irish Lions and Barbarian F.C. played a rugby union match at the Hong Kong Stadium.

The stadium was used as the final venue for both the Rugby 7s and Football tournaments of the 2009 East Asian Games. Hong Kong's rugby 7s team and football team both made the final against Japan. The rugby 7s team finished second to Japan but the football team defeated them in front of over 31,000 spectators, including Donald Tsang.

South China and Kitchee had used the sports ground as the home stadium in 2009–10 season.[15]

Starting from 2010/11 football season, only South China use the Hong Kong Stadium as the home stadium.

In addition to the nine venues located in Japan, one venue each from Singapore and Hong Kong have also been proposed to host five matches respectively.[16] The Hong Kong Stadium, with a capacity of 40,000, may host matches.

At the 2013 Policy Address, Chief Executive Leung Chun Ying said once the Kai Tak Stadium is operational in 2019, the Hong Kong Stadium will be turned into a 10,000 capacity district sports arena.[17]

The first full house official football match (i.e. non-exhibition match) at the Hong Kong Stadium was the 2009 AFC Cup semi-final second leg between South China AA and Kuwait SC.[18] This was added to in the same year by the 2009 East Asian Games football final between Hong Kong U23 and Japan U23. Although there were empty seats in the stadium, all tickets were sold or distributed.[19]

Hong Kong Stadium can accommodate 40,000. The spread is as below:

In addition, there are many refreshment kiosks inside the stadium.

The stadium was supposed to be a multi purpose entertainment and sports venue, due to its much greater capacity compared to the other popular and over used Hong Kong Coliseum, where nearly all uses are now strictly for popular entertainment. However, its open-air nature has led to noise complaints from residents in tower blocks surrounding the stadium. It has not been allowed to host entertainment events since 1999.