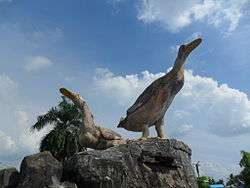 South Kalimantan (Indonesian: Kalimantan Selatan) is a province of Indonesia. It is located in Kalimantan, the Indonesian territory of Borneo. The provincial capital is Banjarmasin. The population of South Kalimantan was recorded at just over 3.625 million people at the 2010 Census;[1] the latest official estimate (for January 2014) is 3,913,908.

About three quarters of the province is flat and less than 100m above sea level, while about 8,000 km² are swampland. The Meratus Mountains are situated approximately along the south-western part to the north-eastern part of the province, dividing the flat area into two. Its highest peak is Gunung Besar with 1,892 metres.

The annual rainfall intensity is high, ranging between 2,000 and 3,700 mm. The mean number of rainy days per year is 120. Barito is the main river, used as a transportation route to the northern part of the province and to Central Kalimantan. Other smaller rivers are mostly springing from the Meratus Mountains.

The main natural resources in South Kalimantan are forest and coal. Coal deposits are found over almost the whole province, and in some places they are exploited commercially. Other minor resources are oil, gold, gem stones, quartz sand, phosphate and granite.[3]

There are eleven regencies (kabupaten) and two cities (kota) in South Kalimantan as listed below with their areas and their populations at the 2010 Census and according to the latest official estimate (for January 2014)[4] together with their administrative capitals:

In 2010, South Kalimantan's exports grew by 27%, the highest increase among all Indonesian provinces. The province's total exports rank seventh out of all provinces.[5]

In 2008 the number of visitors to the province was 339,000 of which 21,000 were international visitors, mostly from China, Philippines and India.

Right after Indonesia's proclamation of independence (17 August 1945), the government under Soekarno and Hatta appointed Ir. H. Pangeran Muhammad Noor as the governor of the whole of Kalimantan on 18 August 1945; its capital was Banjarmasin. Later on, it was decided to divide the area into several provinces. On 7 December 1956, the province of South Kalimantan was formed out of these areas: Kotawaringin, Dayak Besar (Great Dayak), Daerah Banjar (Banjar Region), and the Federation of Southeast Kalimantan. Later on, Pasir regency (a part of the Southeast Kalimantan Federation) was transferred to the province of East Kalimantan instead. Furthermore, on 23 May 1957, Kotawaringin and Dayak Besar removed themselves from South Kalimantan to form their own province, Central Kalimantan.