Kalimantan Timur) is a province of Indonesia. Its territory comprises the eastern portion of Borneo. It has a population of about 3.5 million,[1] and its capital is Samarinda.

East Kalimantan has a total area of 129,066.64 square kilometres (49,832.91 sq mi)[3] and is the second least densely populated province in Kalimantan.[4] The majority of the region shares a maritime border to the east with West Sulawesi and North Sulawesi; its coastline faces the Makassar Strait and the Celebes Sea. Its former northernmost region is now North Kalimantan; to its south, East Kalimantan borders the South Kalimantan province. The province bordered Sabah before the split, but still borders Sarawak.

East Kalimantan is now divided into six regencies and three cities. Awang Faroek Ishak is its governor and Mukmin Faisal as its vice governor.[5]

This province is the location of the oldest Hindu kingdom in Indonesia, Kutai, the existence of which is attested to by a stone manuscript, or Prasasti, which is now kept in the National Museum in Jakarta. The manuscript is written in the Pallava alphabet and the Sanskrit language. The replica of this manuscript can be seen in the Governor's Office in Samarinda.

Inscriptions on seven stone pillars (yupa posts) erected in the fifth century BCE on the command of a local ruler, King Mulavarman, records his victories, his generosity to Brahmins, his princely genealogy.[6]

Until 2012, East Kalimantan was divided into ten regencies (kabupaten) and four cities (kota). On 22 October 2012, the Indonesian House of Representatives agreed to the creation of a new province out of the four most northerly of the Regencies in East Kalimantan, namely Malinau Regency, Nunukan Regency, Tana Tidung Regency and Bulungan Regency, together with one city, Tarakan. Accordingly, these were split off to form the new province of North Kalimantan on 25 October 2012, leaving the following regencies and cities to comprise the reduced East Kalimantan: 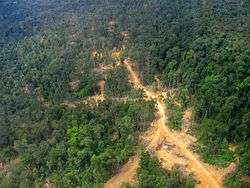 East Kalimantan's economy heavily depends on earth resources such as oilfield exploration, natural gas, coal and gold. Balikpapan has an oil refinery plant that was built by Dutch governance before World War II, destroyed during World War II, and rebuilt after Indonesian independence.

Other developing economic sectors include agriculture and tourism.

In 2012, Russia's state railway firm Joint Stock Company (JSC) signed a Memorandum of Understanding with the East Kalimantan Governor over railway lines to transport coal and other freight. The first stage will connect an area near Balikpapan port to West Kutai Regency in a 183-kilometer line and is estimated to cost about $1.8 billion. It will commence in 2013 and by 2017 it is hoped that it carry 20 million tons of coal annually. The second phase will connect a line to Murung Raya in Central Kalimantan with a 60 kilometer line, which will cost an estimated $600 million.[10]

Several oil fields have been discovered in the Mahakam River Delta including Attaka, Badak (1971), Semberah, Nilam, Sanga Sanga, Bekapai (1972), Handil (1974), Samboja, Jakin and Sepinggan.[11][12][13] The Handil, Badak and Bekapai fields are anticline structural traps with oil reservoir sandstones between 450 and 2900 m.[11]:399 The delta is in the Kutei basin, bounded by the Mankalihat and Paternoster carbonate arch, containing Eocene shales overlain by Oligocene fluvial deposits during marine regression, culminating in formation of the delta in the late Miocene.[11]:400

In addition to Derawan Islands, East Kalimantan has a unique natural site, Labuan Cermin Lake at Biduk-biduk district which features fresh water on top with about 2 meters thickness and sea water underneath it. Both fresh water fish and sea water fish live in the lake inhabiting their respective habitat layer. "Cermin" means mirror in Indonesian language and the lake was named so due to the clarity of the water.[14]

North Kalimantan was formally inaugurated as the 34th province of Indonesia on April 15, 2013. The new province was previously part of East Kalimantan Province and Irianto Lambrie will be acting as the governor of it until a new governor is chosen by their people in an election.[15]