The origins of spherical trigonometry in Greek mathematics and the major developments in Islamic mathematics are discussed fully in History of trigonometry and Mathematics in medieval Islam. The subject came to fruition in Early Modern times with important developments by John Napier, Delambre and others, and attained an essentially complete form by the end of the nineteenth century with the publication of Todhunter's textbook Spherical trigonometry for the use of colleges and Schools. This book is now readily available on the web.[1] The only significant developments since then have been the application of vector methods for the derivation of the theorems and the use of computers to carry through lengthy calculations. 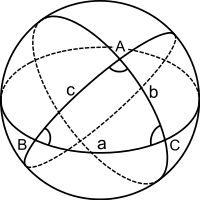 A spherical polygon on the surface of the sphere is defined by a number of great circle arcs that are the intersection of the surface with planes through the centre of the sphere. Such polygons may have any number of sides. Two planes define a lune, also called a "digon" or bi-angle, the two-sided analogue of the triangle: a familiar example is the curved surface of a segment of an orange. Three planes define a spherical triangle, the principal subject of this article. Four planes define a spherical quadrilateral: such a figure, and higher sided polygons, can always be treated as a number of spherical triangles.

From this point the article will be restricted to spherical triangles, denoted simply as triangles. 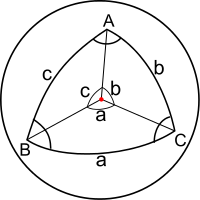 The basic triangle on a unit sphere. 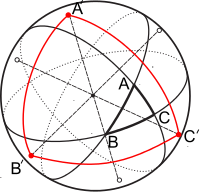 The polar triangle associated with a triangle ABC is defined as follows. Consider the great circle that contains the side BC. This great circle is defined by the intersection of a diametral plane with the surface. Draw the normal to that plane at the centre: it intersects the surface at two points and the point that is on the same side of the plane as A is (conventionally) termed the pole of A and it is denoted by A'. The points B' and C' are defined similarly.

The cosine rule is the fundamental identity of spherical trigonometry: all other identities, including the sine rule, may be derived from the cosine rule.

These identities reduce to the cosine rule of plane trigonometry in the limit of sides much smaller than the radius of the sphere. (On the unit sphere a, b, c<<1: set

These identities reduce to the sine rule of plane trigonometry in the limit of small sides.

Derivation of the cosine rule 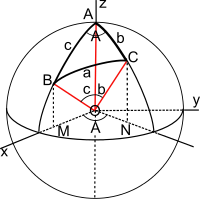 Consider three unit vectors OA, OB and OC drawn from the origin to the vertices of the triangle (on the unit sphere). The arc BC subtends an angle of magnitude a at the centre and therefore OB·OC=cos a. Introduce a Cartesian basis with OA along the z-axis and OB in the xz-plane making an angle c with the z-axis. The vector OC projects to ON in the xy-plane and the angle between ON and the x-axis is A. Therefore, the three vectors have components:

The scalar product OB·OC in terms of the components is

Equating the two expressions for the scalar product gives

This equation can be re-arranged to give explicit expressions for the angle in terms of the sides:

The other cosine rules are obtained by cyclic permutations.

Derivation of the sine rule

This derivation is given in Todhunter,[1] (Art.40). From the identity

and the explicit expression for

The six parts of a triangle may be written in cyclic order as (aCbAcB). The cotangent, or four-part, formulae relate two sides and two angles forming four consecutive parts around the triangle, for example (aCbA) or (BaCb). In such a set there are inner and outer parts: for example in the set (BaCb) the inner angle is C, the inner side is a, the outer angle is B, the outer side is b. The cotangent rule may be written as (Todhunter,[1] Art.44)

and the six possible equations are (with the relevant set shown at right):

from the third cosine rule:

The result follows on dividing by

. Similar techniques with the other two cosine rules give CT3 and CT5. The other three equations follow by applying rules 1, 3 and 5 to the polar triangle.

The proof (Todhunter,[1] Art.49) of the first formula starts from the identity 2sin2(A/2) = 1–cosA, using the cosine rule to express A in terms of the sides and replacing the sum of two cosines by a product. (See sum-to-product identities.) The second formula starts from the identity 2cos2(A/2) = 1+cosA, the third is a quotient and the remainder follow by applying the results to the polar triangle.

Proved by expanding the numerators and using the half angle formulae. (Todhunter,[1] Art.54 and Delambre[3])

These identities follow by division of the Delambre formulae. (Todhunter,[1] Art.52)

When one of the angles, say C, of a spherical triangle is equal to π/2 the various identities given above are considerably simplified. There are ten identities relating three elements chosen from the set a, b, c, A, B.

Napier[4] provided an elegant mnemonic aid for the ten independent equations: the mnemonic is called Napier's circle or Napier's pentagon (when the circle in the above figure, right, is replaced by a pentagon).

First write in a circle the six parts of the triangle (three vertex angles, three arc angles for the sides): for the triangle shown above left this gives aCbAcB. Next replace the parts that are not adjacent to C (that is A, c, B) by their complements and then delete the angle C from the list. The remaining parts are as shown in the above figure (right). For any choice of three contiguous parts, one (the middle part) will be adjacent to two parts and opposite the other two parts. The ten Napier's Rules are given by

For an example, starting with the sector containing

The full set of rules for the right spherical triangle is (Todhunter,[1] Art.62)

When one of the sides, say c, of a spherical triangle is equal to π/2 the corresponding equations are obtained by applying the above rules to the polar triangle A'B'C' with sides a',b',c' such that A' = π–a,  a' = π–A etc. This gives the following equations:

Substituting the second cosine rule into the first and simplifying gives:

Cancelling the factor of

Similar substitutions in the other cosine and supplementary cosine formulae give a large variety of 5-part rules. They are rarely used.

The solution of triangles is the principal purpose of spherical trigonometry: given three, four or five elements of the triangle determine the remainder. The case of five given elements is trivial, requiring only a single application of the sine rule. For four given elements there is one non-trivial case, which is discussed below. For three given elements there are six cases: three sides, two sides and an included or opposite angle, two angles and an included or opposite side, or three angles. (The last case has no analogue in planar trigonometry.) No single method solves all cases. The figure below shows the seven non-trivial cases: in each case the given sides are marked with a cross-bar and the given angles with an arc. (The given elements are also listed below the triangle). There is a full discussion of the solution of oblique triangles in Todhunter[1] (ChapterVI).

The solution methods listed here are not the only possible choices: many others are possible. In general it is better to choose methods that avoid taking an inverse sine because of the possible ambiguity between an angle and its supplement. The use of half-angle formulae is often advisable because half-angles will be less than π/2 and therefore free from ambiguity. There is a full discussion in Todhunter. The solution of triangles article presents variants on these methods with a slightly different notation.

Another approach is to split the triangle into two right-angled triangles. For example, take the Case 3 example where b, c, B are given. Construct the great circle from A that is normal to the side BC at the point D. Use Napier's rules to solve the triangle ABD: use c and B to find the sides AD, BD and the angle BAD. Then use Napier's rules to solve the triangle ACD: that is use AD and b to find the side DC and the angles C and DAC. The angle A and side a follow by addition.

Not all of the rules obtained are numerically robust in extreme examples, for example when an angle approaches zero or π. Problems and solutions may have to be examined carefully, particularly when writing code to solve an arbitrary triangle.

Consider an N-sided spherical polygon and let An denote the n-th interior angle. The area of such a polygon is given by (Todhunter,[1] Art.99)

For the case of triangle this reduces to

where E is the amount by which the sum of the angles exceeds π radians. The quantity E is called the spherical excess of the triangle. This theorem is named after its author, Albert Girard.[5] An earlier proof was derived, but not published, by the English mathematician Thomas Harriot. On a sphere of radius R both of the above area expressions are multiplied by R2. The definition of the excess is independent of the radius of the sphere.

The converse result may be written as

Since the area of a triangle cannot be negative the spherical excess is always positive. Note that it is not necessarily small since the sum of the angles may attain 3π. For example, an octant of a sphere is a spherical triangle with three right angles, so that the excess is π/2. In practical applications it is often small: for example the triangles of geodetic survey typically have a spherical excess much less than 1' of arc. (Rapp[6] Clarke,[7] Legendre's theorem on spherical triangles). On the Earth the excess of an equilateral triangle with sides 21.3 km (and area 393 km2) is approximately 1 arc second.

There are many formulae for the excess. For example, Todhunter,[1] (Art.101—103) gives ten examples including that of L'Huilier:

. Because some triangles are badly characterized by their edges (e.g., if

), it is often better to use the formula for the excess in terms of two edges and their included angle

An example for a spherical quadrangle bounded by a segment of a great circle, two meridians, and the equator is

denote latitude and longitude. This result is obtained from one of Napier's analogies. In the limit where

are all small, this reduces to the familiar trapezoidal area,