For other uses, see Digon (disambiguation).

In geometry, a digon is a polygon with two sides (edges) and two vertices. Its construction is degenerate in a Euclidean plane because the two sides would either coincide or one or both would have to be curved.

A regular digon has both angles equal and both sides equal and is represented by Schläfli symbol {2}. It may be constructed on a sphere as a pair of 180 degree arcs connecting antipodal points, when it forms a lune.

The digon is the simplest abstract polytope of rank 2.

A straight-sided digon is regular even though it is degenerate, because its two edges are the same length and its two angles are equal (both being zero degrees). As such, the regular digon is a constructible polygon.[1]

Some definitions of a polygon do not consider the digon to be a proper polygon because of its degeneracy in the Euclidean case.[2] 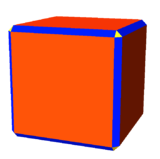 A nonuniform truncated cuboctahedron with blue rectangular faces that degenerate into digons in the cubic limit.

A digon as a face of a polyhedron is degenerate because it is a degenerate polygon. But sometimes it can have a useful topological existence in transforming polyhedra.

As a spherical lune

A spherical lune is a digon whose two vertices are antipodal points on the sphere.[3]

A spherical polyhedron constructed from such digons is called a hosohedron.

The digon is an important construct in the topological theory of networks such as graphs and polyhedral surfaces. Topological equivalences may be established using a process of reduction to a minimal set of polygons, without affecting the global topological characteristics such as the Euler value. The digon represents a stage in the simplification where it can be simply removed and substituted by a line segment, without affecting the overall characteristics.

The cyclic groups may be obtained as rotation symmetries of polygons: the rotational symmetries of the digon provide the group C2.