Sri Lankan Moors (Tamil: இலங்கைச் சோனகர் colloquially referred to as Muslims) are the third largest ethnic group in Sri Lanka, comprising 9.23% of the country's total population. They are native speakers of the Tamil language[3][4] and predominantly followers of Islam. The Tamil term for Muslims in Sri Lanka is சோனகர் (Sonakar), சோனர் (Sonar) or சோனி (Sooni) probably derived from Sunni.[5] While some sources describe them as a subset of the Tamil people who had adopted Islam as their religion and spoke Tamil as their mother tongue, which they continue to do,[3][5][6][7][8] other sources trace their ancestry to Arab traders (Moors) who settled in Sri Lanka some time between the 8th and 15th centuries.[2][9][10][11] Moors today use Tamil as their primary language, with influence from Arabic.[6] The population of Muslims are the highest in the Ampara and Trincomalee districts respectively. 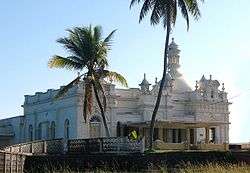 Kechimalai Mosque, Beruwala. One of the oldest mosques in Sri Lanka. It is believed to be the site where the first Arabs landed in Sri Lanka

Throughout history, the Tamils of Sri Lanka have tried to classify the Sri Lankan Moors as belonging to the Tamil ethnic group.[10] Their view holds that the Sri Lankan Moors were simply Tamil converts to Islam. The claim that the Moors were the progeny of the original Arab settlers, might hold good for a few families but not for the entire bulk of the community.[5] This is evidenced by the fact that, the Moors's Islamic Cultural Home, Colombo were unsuccessful in digging up the genealogical history of Muslim families with Arab descent, in any great numbers. I.L.M. Abdul Azeez (of the organization) seemed to have accepted the idea, when he observed that:

It may be safely argued that, the number of original settlers was not even more than a hundred.

Another theory claims, Sri Lankan Moors are not a distinct or self-defined people and the word (Moors) did not exist in Sri Lanka before the arrival of the Portuguese colonists.[12] The Portuguese named the Muslims in India and Sri Lanka after the Muslim Moors they met in Iberia.[13] Moreover, the term 'Moor' referred to only their religion and was no reflection on their origin.[5]

The concept of Arab descent was thus, invented just to keep the community away from the Tamils and this 'separate identity' intended to check the latter's demand for the separate state Tamil Eelam and to flare up hostilities between the two groups in the broader Tamil-Sinhalese conflict.[5][7][8]

Another view suggests that the Arab traders, however, adopted the Tamil language only after settling in Sri Lanka.[11] This version claims that the features of Sri Lankan Moors as different from that of Tamils; they commonly have lighter skin tone and hair color. Thus, some scholars classify the Sri Lankan Moors and Tamils as two distinct ethnic groups, who speak the same language.[11] This view is dominantly held by the Sinhalese favoring section of the Moors as well as the Sri Lankan government which lists the Moors as a separate ethnic community.[5] However, a study on genetic variation indicates, an only below average genetic relationship between Arabs and the Moors.[9]

The Sri Lankan Moors have been strongly shaped by Islamic culture, with many customs and practices according to Islamic law. While preserving many of their ancestral customs, the Moors have also adopted several South Asian practices.[15] 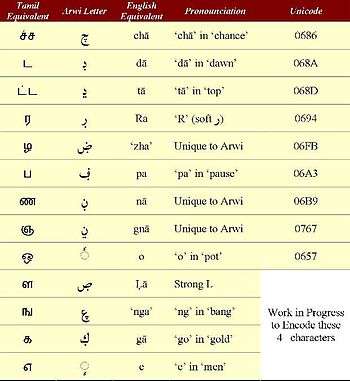 Letters of the Arwi alphabet and their equivalent Tamil letter.

Tamil is stated to be the mother tongue of more than 99% of the community. Moorish Tamil bears the influence of Arabic.[6] Furthermore, the Moors like their counterparts[4][16] in Tamil Nadu, use the Arwi which is a written register of the Tamil language with the use of the Arabic alphabet.[17] The Arwi alphabet is unique to the Muslims of Tamil Nadu and Sri Lanka, hinting at erstwhile close relations between the Tamil Muslims across the two territories.[4]

Religious sermons are delivered in Tamil even in regions where Tamil is not the majority language. Islamic Tamil literature has a thousand-year heritage.[3]

The Moors practice several customs and beliefs, which they closely share with the Tamil people of other faiths and Arab customs. Tamil customs such as wearing the Thaali or eating Patchoru were widely prevalent among the Moors. Arab customs such as congregational eating using a large shared plate called the 'sahn' and wearing of the North African fez during marriage ceremonies feed to the view that Moors are of mixed Tamil and Arab heritage.[3][5]

There have been a growing trend amongst Moors to rediscover their Arab heritage and reinstating the Arab customs that are the norm amongst Arabs in Middle East and North Africa. These include replacing the sari and other traditional clothing associated with Tamil culture in favour of the abaya and hijab by the women as well as increased interest in learning arabic and appetite for Arab food by opening restaurants and takeaways that serve Arab food such as shawarma and Arab bread. 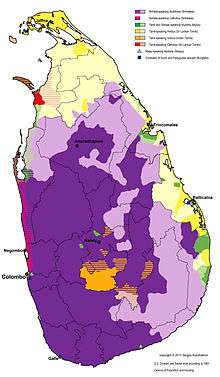 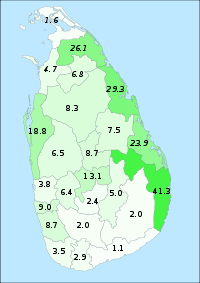