For other uses, see Abaya (disambiguation).

The abaya "cloak" (colloquially and more commonly, Arabic: عباية‎‎ ʿabāyah , especially in Literary Arabic: عباءة ʿabāʾah ; plural عبايات ʿabāyāt , عباءات ʿabāʾāt ), sometimes also called an aba, is a simple, loose over-garment, essentially a robe-like dress, worn by some women in parts of the Muslim world including in North Africa and the Arabian Peninsula.[1] Traditional abayat are black and may be either a large square of fabric draped from the shoulders or head or a long caftan. The abaya covers the whole body except the head, feet, and hands. It can be worn with the niqāb, a face veil covering all but the eyes. Some women also wear long black gloves, so their hands are covered as well.

The Indonesian and Malaysian women's traditional dress kebaya gets its name from the abaya. 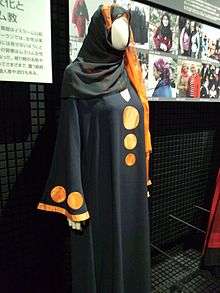 Abaya with a headscarf

The rationale for the abaya is often attributed to the Quranic quote, "O Prophet, tell your wives and daughters, and the believing women, to cover themselves with a loose garment. They will thus be recognised and no harm will come to them" Qur'an 33:59[2] (Translated by Ahmed Ali) This quote is often given as the argument for wearing the abaya.

The abaya is most common in countries with large Muslim populations. Some denominations of Islam consider the entire female body, except for the face and hands, awrah – that which should be concealed in public from males unrelated by blood or marriage.

Outside the few Arab states and Saudi Arabia, in nations with large Muslim populations, such as Indonesia and Pakistan, not everyone wears it.

In Saudi Arabia, women are required to cover in public.[3]

Abayat are known by various names but serve the same purpose, which is to cover. Contemporary models are usually caftans, cut from light, flowing fabrics like crepe, georgette, and chiffon. Other known abaya styles are front open and front closed abaya. Styles differ from region to region: some abayat have embroidery on black fabric while others are brightly coloured and have different forms of artwork across them.