In control engineering, a state-space representation is a mathematical model of a physical system as a set of input, output and state variables related by first-order differential equations. "State space" refers to the space whose axes are the state variables. The state of the system can be represented as a vector within that space.

To abstract from the number of inputs, outputs and states, these variables are expressed as vectors. Additionally, if the dynamical system is linear, time-invariant, and finite-dimensional, then the differential and algebraic equations may be written in matrix form.[1][2] The state-space method is characterized by significant algebraization of general system theory, which makes it possible to use Kronecker vector-matrix structures. The capacity of these structures can be efficiently applied to research systems with modulation or without it.[3] The state-space representation (also known as the "time-domain approach") provides a convenient and compact way to model and analyze systems with multiple inputs and outputs. With

outputs, we would otherwise have to write down

Laplace transforms to encode all the information about a system. Unlike the frequency domain approach, the use of the state-space representation is not limited to systems with linear components and zero initial conditions.

The internal state variables are the smallest possible subset of system variables that can represent the entire state of the system at any given time.[4] The minimum number of state variables required to represent a given system,

The most general state-space representation of a linear system with

state variables is written in the following form:[5]

is called the "state vector",

is called the "output vector",

is called the "input (or control) vector",

is the "state (or system) matrix",

is the "input matrix",

is the "output matrix",

is the "feedthrough (or feedforward) matrix" (in cases where the system model does not have a direct feedthrough,

is the zero matrix),

In this general formulation, all matrices are allowed to be time-variant (i.e. their elements can depend on time); however, in the common LTI case, matrices will be time invariant. The time variable

can be continuous (e.g.

). In the latter case, the time variable

is usually used instead of

. Hybrid systems allow for time domains that have both continuous and discrete parts. Depending on the assumptions taken, the state-space model representation can assume the following forms:

Stability and natural response characteristics of a continuous-time LTI system (i.e., linear with matrices that are constant with respect to time) can be studied from the eigenvalues of the matrix A. The stability of a time-invariant state-space model can be determined by looking at the system's transfer function in factored form. It will then look something like this:

The roots of this polynomial (the eigenvalues) are the system transfer function's poles (i.e., the singularities where the transfer function's magnitude is unbounded). These poles can be used to analyze whether the system is asymptotically stable or marginally stable. An alternative approach to determining stability, which does not involve calculating eigenvalues, is to analyze the system's Lyapunov stability.

The zeros found in the numerator of

can similarly be used to determine whether the system is minimum phase.

The system may still be input–output stable (see BIBO stable) even though it is not internally stable. This may be the case if unstable poles are canceled out by zeros (i.e., if those singularities in the transfer function are removable).

State controllability condition implies that it is possible – by admissible inputs – to steer the states from any initial value to any final value within some finite time window. A continuous time-invariant linear state-space model is controllable if and only if

where rank is the number of linearly independent rows in a matrix.

The "transfer function" of a continuous time-invariant linear state-space model can be derived in the following way:

First, taking the Laplace transform of

Next, we simplify for

in the output equation

). However, the ratio of a vector to a vector does not exist, so we consider the following condition satisfied by the transfer function

comparison with the equation for

dimensionality, and thus has a total of

elements. So for every input there are

Any given transfer function which is strictly proper can easily be transferred into state-space by the following approach (this example is for a 4-dimensional, single-input, single-output system):

Given a transfer function, expand it to reveal all coefficients in both the numerator and denominator. This should result in the following form:

The coefficients can now be inserted directly into the state-space model by the following approach:

This state-space realization is called controllable canonical form because the resulting model is guaranteed to be controllable (i.e., because the control enters a chain of integrators, it has the ability to move every state).

This state-space realization is called observable canonical form because the resulting model is guaranteed to be observable (i.e., because the output exits from a chain of integrators, every state has an effect on the output).

Here is an example to clear things up a bit:

which yields the following controllable realization

Notice how the output also depends directly on the input. This is due to the

constant in the transfer function. 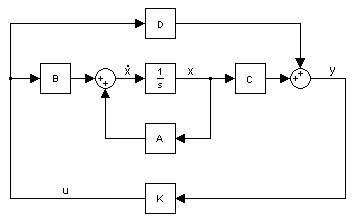 A common method for feedback is to multiply the output by a matrix K and setting this as the input to the system:

. Since the values of K are unrestricted the values can easily be negated for negative feedback. The presence of a negative sign (the common notation) is merely a notational one and its absence has no impact on the end results.

solving the output equation for

and substituting in the state equation results in

. This assumes that the closed-loop system is controllable or that the unstable eigenvalues of A can be made stable through appropriate choice of K.

For a strictly proper system D equals zero. Another fairly common situation is when all states are outputs, i.e. y = x, which yields C = I, the Identity matrix. This would then result in the simpler equations

This reduces the necessary eigendecomposition to just 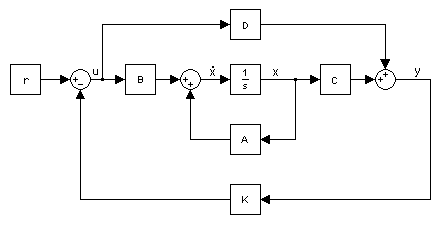 In addition to feedback, an input,

, can be added such that

solving the output equation for

and substituting in the state equation results in

One fairly common simplification to this system is removing D, which reduces the equations to

A classical linear system is that of one-dimensional movement of an object. Newton's laws of motion for an object moving horizontally on a plane and attached to a wall with a spring

The state equation would then become

The controllability test is then

which has full rank for all

The observability test is then

which also has full rank. Therefore, this system is both controllable and observable.

The more general form of a state-space model can be written as two functions.

The first is the state equation and the latter is the output equation. If the function

is a linear combination of states and inputs then the equations can be written in matrix notation like above. The

argument to the functions can be dropped if the system is unforced (i.e., it has no inputs).

A classic nonlinear system is a simple unforced pendulum

The state equations are then

Instead, the state equation can be written in the general form

The equilibrium/stationary points of a system are when

On the applications of state-space models in econometrics