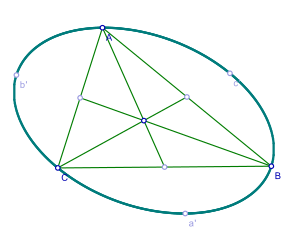 and hence is 4 times the area of the Steiner inellipse. The Steiner ellipse has the least area of any ellipse circumscribed about the triangle.[1]

The equation of the Steiner circumellipse in trilinear coordinates is[1]

The semi-major and semi-minor axes have lengths[1]

The foci are called the Bickart points of the triangle.

Given a triangle with vertices

can be solved, and the reciprocals of the eigenvalues of the matrix form of the solution

are 3 times the squared lengths of the semi-major axis and semi-minor axis; the corresponding eigenvectors relate to the orientation. This approach generalizes to higher dimensions.