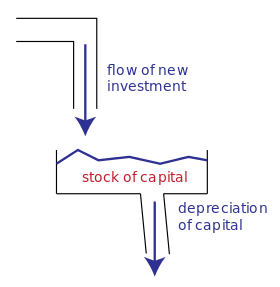 Economics, business, accounting, and related fields often distinguish between quantities that are stocks and those that are flows. These differ in their units of measurement. A stock variable is measured at one specific time, and represents a quantity existing at that point in time (say, December 31, 2004), which may have accumulated in the past. A flow variable is measured over an interval of time. Therefore a flow would be measured per unit of time (say a year). Flow is roughly analogous to rate or speed in this sense.

For example, U.S. nominal gross domestic product refers to a total number of dollars spent over a time period, such as a year. Therefore it is a flow variable, and has units of dollars/year. In contrast, the U.S. nominal capital stock is the total value, in dollars, of equipment, buildings, inventories, and other real assets in the U.S. economy, and has units of dollars. The diagram provides an intuitive illustration of how the stock of capital currently available is increased by the flow of new investment and depleted by the flow of depreciation.

Stocks and flows in accounting

Thus, a stock refers to the value of an asset at a balance date (or point in time), while a flow refers to the total value of transactions (sales or purchases, incomes or expenditures) during an accounting period. If the flow value of an economic activity is divided by the average stock value during an accounting period, we obtain a measure of the number of turnovers (or rotations) of a stock in that accounting period. Some accounting entries are normally always represented as a flow (e.g. profit or income), while others may be represented both as a stock or as a flow (e.g. capital).

A person or country might have stocks of money, financial assets, liabilities, wealth, real means of production, capital, inventories, and human capital (or labor power). Flow magnitudes include income, spending, saving, debt repayment, fixed investment, inventory investment, and labor utilization.These differ in their units of measurement. Capital is a stock concept which yields a periodic income which is a flow concept.

For more details on this topic, see Dimensional analysis § Commensurability.

Stocks and flows have different units and are thus not commensurable – they cannot be meaningfully compared, equated, added, or subtracted. However, one may meaningfully take ratios of stocks and flows, or multiply or divide them. This is a point of some confusion for some economics students, as some confuse taking ratios (valid) with comparing (invalid).

The ratio of a flow to a stock has units 1/time. For example, the velocity of money is defined as nominal GDP / nominal money supply; it has units of (dollars / year) / dollars = 1/year.

In continuous time, the time derivative of a stock variable is a flow variable.

Stocks and flows also have natural meanings in many contexts outside of economics, business and related fields. Thus stocks and flows are the basic building blocks of system dynamics models. Jay Forrester originally referred to them as "levels" (for stocks) and "rates" (for flows).

A stock (or "level variable") in this broader sense is some entity that is accumulated over time by inflows and/or depleted by outflows. Stocks can only be changed via flows. Mathematically a stock can be seen as an accumulation or integration of flows over time – with outflows subtracting from the stock. Stocks typically have a certain value at each moment of time – e.g. the number of population at a certain moment.

A flow (or "rate") changes a stock over time. Usually we can clearly distinguish inflows (adding to the stock) and outflows (subtracting from the stock). Flows typically are measured over a certain interval of time – e.g., the number of births over a day or month.

If the quantity of some stock variable at time

is the flow of changes in the stock. Likewise, the stock at some time t is the integral of the flow from some time when the time was zero until time t.

For example, if the capital stock

is increased gradually over time by a flow of gross investment

and decreased gradually over time by a flow of depreciation

, then the instantaneous rate of change in the capital stock is given by

refers to the flow of net investment, which is the difference between gross investment and depreciation.

Equations that change the two stocks via the flow are:

List of all the equations, in their order of execution in each time, from time = 1 to 36:

Polish economist Michał Kalecki emphasized the centrality of the distinction of stocks and flows, caustically calling economics "the science of confusing stocks with flows" in his critique of the quantity theory of money (circa 1936, frequently quoted by Joan Robinson).[1]