Systems thinking involves the use of various techniques to study and understand systems of many kinds. In nature, examples of the objects of systems thinking include living systems in which various levels interact (cell, organ, individual, group, organization, community, earth). In organizations, systems consist of inputs, transformations, outputs, feedback loops, goals, stakeholders, and external influences that operate together to make an organization healthy or unhealthy.. Systems engineering is a discipline that applies systems thinking to design, build, operate, and maintain complex engineered systems.

Systems thinking has roots in a diverse range of sources from Jan Smuts' holism in the 1920s, to the general systems theory that was advanced by Ludwig von Bertalanffy in the 1940s and cybernetics advanced by Ross Ashby in the 1950s. The field was further developed by Jay Forrester and members of the Society for Organizational Learning at MIT, which culminated in the popular book The Fifth Discipline by Peter Senge, which defined systems thinking as the capstone for true organizational learning.[1] Systems scientist Derek Cabrera's book Systems Thinking Made Simple claimed that systems thinking itself is the emergent property of complex adaptive system behavior that results from four simple rules of thought.[2] 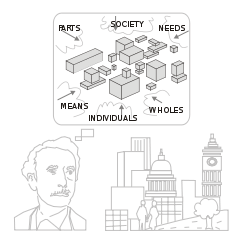 Impression of systems thinking about society.

Systems thinking has been defined as an approach to problem solving that attempts to balance holistic thinking and reductionistic thinking. By taking the overall system as well as its parts into account systems thinking is designed to avoid potentially contributing to further development of unintended consequences. There are many methods and approaches to systems thinking. For example, the Waters Foundation presents systems thinking as a set of habits or practices within a framework that is based on the belief that the component parts of a system can best be understood in the context of relationships with each other and with other systems, rather than in isolation; and that systems thinking focuses on cyclical rather than linear cause and effect.[3] Other models characterize systems thinking differently. Recent scholars, however, are focused on the "patterns that connect" this diversity or pluralism of methods and approaches.

In systems science, it is argued that the only way to fully understand why a problem or element occurs and persists is to understand the parts in relation to the whole.[4] Standing in contrast to Descartes's scientific reductionism, it proposes to view systems in a holistic manner. Consistent with systems philosophy, systems thinking concerns an understanding of a system by examining the linkages and interactions between the elements that compose the entire system.

Systems science thinking attempts to illustrate how small catalytic events that are separated by distance and time can be the cause of significant changes in complex systems. Acknowledging that an improvement in one area of a system can adversely affect another area of the system, it promotes organizational communication at all levels to avoid the silo effect. Systems thinking techniques may be used to study any kind of system – physical, biological, social, scientific, engineered, human, or conceptual.

The concept of a system

Several ways to think of and define a system include:

A holistic system is any set (group) of interdependent or temporally interacting parts. Parts are generally systems themselves and composed of other parts, just as systems are generally parts or holons of other systems.

Systems science and the application of systems science thinking has been grouped into the following three categories based on the techniques or methodologies used to design, analyze, modify, or manage a system:

A treatise on systems thinking ought to address many issues including:

Using the tenet of "multifinality", a supermarket could be considered a:

As a result of such thinking, new insights may be gained into how the supermarket works, why it has problems, how it can be improved or how changes made to one component of the system affects other components.

Systems thinking is increasingly being used to tackle a wide variety of subjects in fields such as business analysis, business management, computing, engineering, epidemiology, information science, health, manufacture, sustainable development, and the environment.

A number of hierarchical frameworks have been developed, but such hierarchical frameworks have also been criticized in an article in the journal Philosophy of Science, which noted that they are plagued with conceptual deficiencies; the authors concluded that "the concept of discrete ontological levels does not succeed and has been used to motivate several problematic claims about the natural world".[6]

Stephen G. Haines' seven levels of living systems, published in 1998,[9] are in hierarchical relationships with each other, systems within systems. They begin with Earth as the largest living system and extend all the way down to cells, the smallest living system.[10]

The following table shows Stafford Beer's 1959 classification of systems based on degrees of complexity and uncertainty.[11][8]:171

In The Social Psychology of Organizations (1966), psychologists Daniel Katz and Robert L. Kahn developed their open system theory for the interpretation of organizational actions in terms of input, throughput, output, environment, and other characteristics.[12][13]