Strike Witches (Japanese: ストライクウィッチーズ, Hepburn: Sutoraiku Witchīzu) is a mixed-media project originally created by Humikane Shimada via a series of magazine illustration columns. The franchise has since been adapted into several light novel, manga, and anime series and various video games. The series revolves around teenage girls who use machines attached to their legs to do aerial combat. The OVA preview episode was released on January 1, 2007. The televised anime series later aired between on July and September 2008. A second season aired between July and September 2010.[1] A film adaptation was released on March 17, 2012 and a three part OVA series was released between September 2014 and May 2015.[2][3] A spin-off anime series, Brave Witches, began airing in Japan from October 2016. 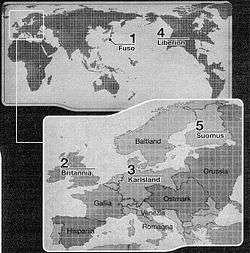 The series takes place in an altered version of Earth, ravaged by the Neuroi. Several large pieces of Earth's landmasses have been obliterated.
See also: List of Strike Witches characters

Strike Witches is set in an alternate Earth during the World War II era. The world has been invaded by a mysterious alien force known as the Neuroi, who take on forms similar to aircraft and spread a corrosive miasma. As a result, the armed forces of the world have allied together to combat the Neuroi threat instead of fighting among themselves. As normal humans have no effect against the Neuroi's technology, the military instead calls upon Witches, young girls who possess magical abilities capable of fighting against the Neuroi. The Witches, who are inspired by famous real-life pilots, grow animal ears and tails when using their magic, and can use special machines known as Striker Units, which feature designs based on real-life aircraft, to fly through the sky and increase the strength of their magical ability in combat.

The light novel series follows the Suomus Independent Volunteer Aerial Squadron, focusing on a dogfighter named Tomoko Anabuki. The main anime franchise follows Yoshika Miyafuji, a girl from the Fusō Empire who joins the 501st Joint Fighter Wing, also known as the Strike Witches, to investigate the death of her father and help fight off the Neuroi. The spin-off anime series, Brave Witches, follows a Fusō girl named Hikari Karibuchi, who joins the 502nd Joint Fighter Wing to fight in the place of her sister Takami, who winds up in a coma after exhausting her magic against the Neuroi.

In a postscript column in Comp Ace, Humikane Shimada had mentioned his desire to use his Mecha Musume concepts across a variety of media, leading to the production of the Strike Witches OVA by Gonzo. However, at about the same time Humikane was also contracted to create the character designs for Sky Girls, which had its televised run in late 2007. During this time there was no word on the further development of a Strike Witches animated series, although promotional items such as plastic figures of the OVA's characters were released. Not until December 2007 was the anime officially announced, after which details were slowly released, such as the casting of the remaining main characters that had no lines in the OVA.

Two separate light novel series have been published. The first, Strike Witches: Suomus Misfits Squadron (ストライクウィッチーズ： いらん子中隊 Sutoraiku Witchīzu: Iranko Chūtai), was written by Noboru Yamaguchi and illustrated by Hashigo Ueda. The first volume was published in Japan in October 2006, and as of June 11, 2009, 3 volumes have been published. A fourth volume, originally scheduled for Spring 2009, is in production. The Suomus Misfits Squadron series is set in a different time period and location from the anime, and uses a different cast of characters.

The second light novel series, titled Strike Witches: Maidens' Volume (ストライクウィッチーズ： 乙女ノ巻 Sutoraiku Witchīzu: Otome no Maki), was written by Hidehisa Nanbō and illustrated by Hashigo Ueda. As of June 11, 2009, 2 volumes have been published, with a third scheduled for July 1, 2009. The publication of this series coincided with the anime television series, and uses the same cast of characters; however, while some of the chapters are adaptations of the anime episodes, several are original.

Published in August 2008, and jointly authored by Humikane Shimada, Takaaki Suzuki, and Takeshi Nogami. It is considered semi-canonical. The B5-size publication contains a manga and novel section, both dealing primarily with the "Star of Africa" Hanna-Justina Marseille during the North African Campaign. Details on the Strike Witches world setting that could not be added into the anime were also added into the publication.

Strike Witches: Witch in Africa was originally meant to be included in the anime DVD booklets, but because of a reduction in the booklet size, it was instead published as a dōjinshi. The manga will be serialised in Comptiq beginning November 10, 2011.[5]

Published in December 2008. Similar to the first volume, and set in the same general time frame and location (North Africa, circa 1942). Consisting of two volumes it follows an experimental Karlsland tank witch unit based on the Tiger I.

World Witches: Witches of the Sphinx

Published from 2010 to 2012, the series takes place in North Africa, 1943 and concerns the joint effort of the Storm Witches and three tank witch units under the command of General Patton, General Montgomery and General Rommel in retaking the Suez Canal. Five volumes were released.

Sengoku Witches: The witch of Honnō-ji

Published in 2009. Takes place during Japan's Sengoku period. Oda Nobunaga is rescued from Honnō-ji by his page, in this version the witch Mori Ranmaru, instead of committing suicide in the incident at Honnō-ji.

An original video animation directed by Kunihisa Sugishima and produced by Gonzo and released on January 1, 2007. The first anime season was produced by Gonzo and aired in Japan between July 3, 2008 and September 18, 2008. Aside from the traditional televised broadcast, the series was also made available with English subtitles and English dub through YouTube, BOST TV and Crunchyroll,[6] using a simultaneous release schedule similar to that of The Tower of Druaga: the Aegis of Uruk, also produced by Gonzo. The YouTube and Crunchyroll broadcasts operate under a streaming window, allowing users to freely watch each new episode of the series on the day of their release for a set amount of time. Crunchyroll also offers individual episodes to be purchased and downloaded during and after this streaming window has ended.[7] An uncensored version of the series was later released on Region 2 DVD, containing nudity that was obscured for the TV broadcast.[8] The first volume was made available on September 26, 2008, the second on October 24, the third volume on November 28, the fourth volume on December 26, and the fifth volume on January 30, 2009. The anime has been licensed by Funimation Entertainment and was released on March 30, 2010.

A second series entitled Strike Witches 2 was produced by AIC and aired between July 7, 2010 and September 23, 2010. This season has also been acquired by Funimation Entertainment and was simulcasted on their video portal, with an intended home video release in September 2011.[9] The release was held back until October 2, 2012. Manga Entertainment released the series in the United Kingdom on September 24, 2012.[10] A three part OVA series produced by Silver Link titled Strike Witches: Operation Victory Arrow, which features three short stories taking place between the second anime season and the film, was released between September 20, 2014 and May 2, 2015.[11]

A spin-off series by Silver Link, titled Brave Witches, began airing on October 5, 2016.[12][13][14] The series is not a continuation of the previous seasons and instead focuses on the 502nd Joint Fighter Wing.[15][16] Crunchyroll is simulcasting the series in North America.[17] Brave Witches will be released across six Blu-ray & DVD volumes.[18]

The first season used two pieces of theme music. "Strike Witches: To Do What I Can" (ストライクウィッチーズ ～わたしにできること～, Sutoraiku Witchīzu ~Watashi ni Dekiru Koto~), performed by Yoko Ishida is used as the opening. "Bookmark A Head" (ブックマーク ア・ヘッド, Bukkumāku A Heddo) is used as the ending. "Bookmark A Head" is performed by the main cast as usually duets and the singers vary from episode to episode. "Lili Marleen" (リリーマルレーン, Ririi Marureen), translated by Takaaki Suzuki, and performed by Minna-Dietlinde Wilcke (Rie Tanaka), is used as an insert song in episode 8. In Funimation's release, Lamp of a Wish (願いの灯火, Negai no Tomoshibi), a song also sung by Rie Tanaka from the CD album for the Strike Witches: What I Can Do Along With You game, was substituted for Lili Marleen.