The Sengoku period (戦国時代, Sengoku jidai, lit. Age of Civil War; c. 1467 – c. 1603) is a period in Japanese history marked by social upheaval, political intrigue and near-constant military conflict. Japanese historians named it after the otherwise unrelated Warring States period in China.[1] It came to an end when all political power was unified under the Tokugawa shogunate.[2][3]

During this period, although the Emperor of Japan was officially the ruler of his nation and every lord swore loyalty to him, he was largely a marginalised, ceremonial, and religious figure who delegated power to the Shogun, a noble who was roughly equivalent to a Generalissimo. In the years preceding this era the Shogunate gradually lost influence and control over the daimyo (local lords). Although the Ashikaga shogunate had retained the structure of the Kamakura shogunate and instituted a warrior government based on the same social economic rights and obligations established by the Hōjō with the Jōei Code in 1232, it failed to win the loyalty of many daimyo, especially those whose domains were far from the capital, Heian-kyō. Many of these Lords began to fight uncontrollably with each other for control over land and influence over the shogunate. As trade with China grew, the economy developed, and the use of money became widespread as markets and commercial cities appeared. This, combined with developments in agriculture and small-scale trading, led to the desire for greater local autonomy throughout all levels of the social hierarchy. As early as the beginning of the 15th century, the suffering caused by earthquakes and famines often served to trigger armed uprisings by farmers weary of debt and taxes.

The Ōnin War (1467–1477), a conflict rooted in economic distress and brought on by a dispute over shogunal succession, is generally regarded as the onset of the Sengoku period. The "eastern" army of the Hosokawa family and its allies clashed with the "western" army of the Yamana. Fighting in and around Kyoto lasted for nearly 11 years, leaving the city almost completely destroyed. The conflict in Kyoto then spread to outlying provinces.[2][4]

The period culminated with a series of three warlords, Oda Nobunaga, Toyotomi Hideyoshi, and Tokugawa Ieyasu, who gradually unified Japan. After Tokugawa Ieyasu's final victory at the siege of Osaka in 1615, Japan settled down into several centuries of peace under the Tokugawa Shogunate, and entered into an era called "Sakoku".

The time span of Sengoku period

The Ōnin War in 1467 is usually considered the starting point of Sengoku period. There are several events which could be considered the end of it: The Siege of Odawara (1590), the Battle of Sekigahara (1600), the establishment of the Tokugawa Shogunate (1603), or the Siege of Osaka (1615). 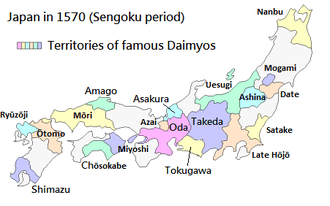 The upheaval resulted in the further weakening of central authority, and throughout Japan regional lords, called daimyo, rose to fill the vacuum. In the course of this power shift, well-established clans such as the Takeda and the Imagawa, who had ruled under the authority of both the Kamakura and Muromachi bakufu, were able to expand their spheres of influence. There were many, however, whose positions eroded and were eventually usurped by more capable underlings. This phenomenon of social meritocracy, in which capable subordinates rejected the status quo and forcefully overthrew an emancipated aristocracy, became known as gekokujō (下克上), which means "low conquers high".[2]

One of the earliest instances of this was Hōjō Sōun, who rose from relatively humble origins and eventually seized power in Izu Province in 1493. Building on the accomplishments of Sōun, the Late Hōjō clan remained a major power in the Kantō region until its subjugation by Toyotomi Hideyoshi late in the Sengoku period. Other notable examples include the supplanting of the Hosokawa clan by the Miyoshi, the Toki by the Saitō, and the Shiba clan by the Oda clan, which was in turn replaced by its underling, Toyotomi Hideyoshi, a son of a peasant with no family name.

Well-organized religious groups also gained political power at this time by uniting farmers in resistance and rebellion against the rule of the daimyo. The monks of the Buddhist True Pure Land sect formed numerous Ikkō-ikki, the most successful of which, in Kaga Province, remained independent for nearly 100 years.

After nearly a century of political instability and warfare, Japan was on the verge of unification by Oda Nobunaga, who had emerged from obscurity in the province of Owari (present-day Aichi Prefecture) to dominate central Japan, when in 1582 Oda was assassinated by one of his generals, Akechi Mitsuhide. This in turn provided Toyotomi Hideyoshi, who had risen through the ranks from ashigaru (footsoldier) to become one of Oda's most trusted generals, with the opportunity to establish himself as Oda's successor. Toyotomi eventually consolidated his control over the remaining daimyo and, although he was ineligible for the title of Seii Taishogun because of his common birth, ruled as Kampaku (Imperial Regent). During his short reign as Kampaku, Toyotomi attempted two invasions of Korea. The first spanning from 1592 to 1596 was initially successful but suffered setbacks to end in stalemate; the second begun in 1597 was less successful (as the Koreans and their Ming Chinese allies were prepared for the Japanese the second time around) and ended with Toyotomi's call for retreat from Korea on his deathbed in 1598.

When Toyotomi died in 1598 without leaving a capable successor, the country was once again thrust into political turmoil, and this time Tokugawa Ieyasu took advantage of the opportunity.[3]

Toyotomi had on his deathbed appointed a group of the most powerful lords in Japan—Tokugawa, Maeda Toshiie, Ukita Hideie, Uesugi Kagekatsu, and Mōri Terumoto—to govern as the Council of Five Regents until his infant son, Hideyori, came of age. An uneasy peace lasted until the death of Maeda in 1599. Thereafter a number of high-ranking figures, notably Ishida Mitsunari, accused Tokugawa of disloyalty to the Toyotomi regime.

This precipitated a crisis that led to the Battle of Sekigahara in 1600, during which Tokugawa and his allies, who controlled the east of the country, defeated the anti-Tokugawa forces, which had control of the west. Generally regarded as the last major conflict of the Sengoku period, Tokugawa's victory at Sekigahara effectively marked the end of the Toyotomi regime, the last remnants of which were finally destroyed in the Siege of Osaka in 1615.

Tokugawa Ieyasu received the title Seii Taishogun in 1603, and abdicated in favour of his son Tokugawa Hidetada in 1605 (while retaining real control himself), to emphasize the family's hereditary hold on the post; he thereby established Japan's final shogunate, which lasted until the Meiji Restoration in 1868. 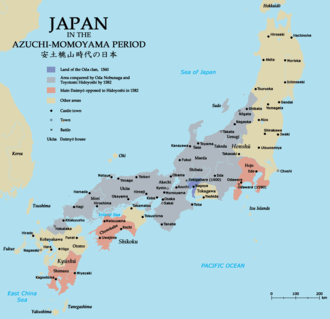 Japan in the late 16th century 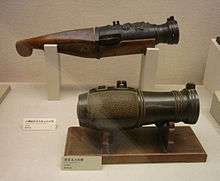 The contrasting personalities of the three leaders who contributed the most to Japan's final unification—Oda, Toyotomi, and Tokugawa—are encapsulated in a series of three well known senryū:

Other notable daimyo include: