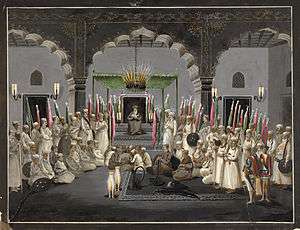 Mughal ranks included the Nawab, Subahdar, Mansabdar, Sawar and Sepoy. Mughal princes were often given the titles of Mir and Mirza

Subahdar (Urdu: صوبہ دار‎) (also known as Nazim or in English as a "Subah"[1]) was one of the designations of a governor of a Subah (province) during the Mughal era of India who was alternately designated as Sahib-i-Subah or Nazim. The word, Subahdar is of Persian origin[2]

The Subahdar was the head of the Mughal provincial administration. He was assisted by the provincial Diwan, Bakshi, Faujdar, Kotwal, Qazi, Sadr, Waqa-i-Navis, Qanungo and Patwari.[3] The Subahdars were normally appointed from the Mughal princes or the officers holding the highest mansabs (ranks).

A nazim (pronounced [ˈnaːzɪm], Urdu: ناظم‎; from the Arabic word for "organizer" or "convenor") (similar to mayor) is the coordinator of cities and towns in Pakistan. Nazim is the title in Urdu of the chief elected official of a local government in Pakistan, such as a district, tehsil, union council, or village council.[4] Likewise, a deputy mayor is known as a Naib nazim (نائب ناظم). The word naib in Urdu literally means "assistant" or "deputy" hence Naib nazim is similar in function to a deputy mayor.[5] He is also custodian of the house.[6]

The name which is used for the president of Islami Jamiat-e-Talaba, the Islamic Union of Students in Pakistan, is Nazim-e-ala. The nazim-e-ala is elected for one year, and after completing that tenure, all the members of IJT who are called (Arkaan) elect a new one. The "chief nazim," or district nazim, is elected by the nazims of Union Councils, Union Councillors, and Tehsil Nazims, who themselves are elected directly by the votes of the local public.

A Nazim is also empowered to decide criminal cases.[7]