For other uses, see Subah (disambiguation). 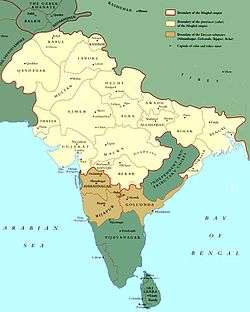 Subahs in the Mughal Empire

A Subah (Urdu: صوبہ‎) in modern context is a word used for province in Urdu language. The word is derived from Arabic. In historic context a Subah was a province of the Mughal Empire in South Asia. The governor of a Subah was known as a subahdar (sometimes also referred to as a "Subah"[1]), which later became subedar to refer to an officer in the Indian Army. The subahs were established by the emperor Akbar during his administrative reforms of 1572-1580; initially they numbered 12, but his conquests expanded the number of subahs to 15 by the end of his reign. Subahs were divided into Sarkars, or districts. Sarkars were further divided into Parganas or Mahals. His successors, most notably Aurangzeb, expanded the number of subahs further through their conquests. As the empire began to dissolve in the early 18th century, many subahs became effectively independent, or were conquered by the Marathas or the British.

Initially, after the administrative reforms of Akbar, the empire was divided into 12 subahs: Kabul, Lahore, Multan, Delhi, Agra, Avadh, Illahabad, Bihar, Bangalah, Malwa, Ajmer and Gujarat. After the conquest of Deccan, three more subahs were created: Berar, Khandesh (initially named Dandesh in 1601) and Ahmadnagar (in 1636 renamed as Daulatabad and subsequently as Aurangabad). At the end of Akbar’s reign, the number of subahs was 15, which was increased to 17 during the reign of Jahangir. Orissa was created as a separate subah out of Bangalah in 1607. The number of subahs increased to 22 under Shah Jahan.[2] In his 8th regnal year, Shah Jahan separated the sarkar of Telangana from Berar and made it into a separate Subah. In 1657, it was merged with Zafarabad Bidar subah. Agra was renamed Akbarabad 1629 and Delhi became Shahjahanbad in 1648.[3] Kashmir was carved out of Kabul, Thatta (Sindh) out of Multan and Bidar out of Ahmadnagar. For some time Qandahar was a separate subah under the Mughal Empire but it was lost to Persia in 1648. Aurangzeb added Bijapur (1686), Sira (1687)[4] and Golkonda (1687) as new subahs. There were 22 subahs during his reign.[2] These were Kabul, Kashmir, Lahore, Multan, Delhi, Agra, Avadh, Illahabad, Bihar, Bangalah, Orissa, Malwa, Ajmer, Gujarat, Berar, Khandesh, Aurangabad, Bidar, Thatta, Bijapur, Sira[4] and Haidarabad (Golkonda).[5] During the reign of Bahadur Shah, Arcot became a Mughal subah in 1710.

In modern usage the term is used as a word for province in Urdu language while the word Riyasat (Urdu: ریاست‎) is used for the word state. The terminologies are based on administrative structure of British India which was partially derived from the Mughal administrative structure. In modern times the term Subah is mainly used in Pakistan where its four provinces are called Subah in Urdu language.

The twelve subahs created as a result of the administrative reform by Akbar:

The subahs which added later were (with dates established):