For other uses, see Mirza (disambiguation).

Mirza (/ˈmɜːrzə/ or /mɪəˈzɑː/)[1][lower-alpha 1] is a historical title of Persian origin, denoting the rank of a high nobleman or Prince. It is usually defined in English as a royal or imperial Prince of the Blood.

Today, Mirza is used as a name to identify patriarchal lineage to royal aristocracies of Eastern Europe, Central Asia, and the Indian Subcontinent. Historically, it was used as a title by and signified patriarchal lineage to the imperial families of the Turkish Empire, Persia, Circassia, Shirvan, Mughals (aka Moguls) and Muslim Rajputs.[2] It was also a title bestowed upon members of the highest aristocracies in Tatar states, such as the Khanates of Kazan and Astrakhan.

Under Catherine the Great, empress of Russia, the Mirzas gained equal rights with the Russian nobility due to their extreme wealth. In return, the Mirzas financed her Russo-Turkish war against the Ottoman Empire.[3] Abdul Mirza was given the title Prince Yusupov, and his descendant Prince Felix Yusupov married Princess Irina Alexandrovna of Russia, the only niece of Tsar Nicholas II.

The word Mīrzā is derived from the Persian term ‘Amīrzāde which literally means "child of the ‘Amīr" or "child of the ruler" in Persian.[4] ‘Amīrzād in turn consists of the Arabic title ‘Amīr (engl. Emir), meaning "commander" and "Prince", and the Persian suffix -zād, meaning "birth" or "lineage". Due to vowel harmony in Turkic languages, the alternative pronunciation Morza (plural morzalar; derived from the Persian word) is also used. The word Mirza means royalty in almost every old version of Persian, Arab, Caucasian, Turkish and Indian languages. 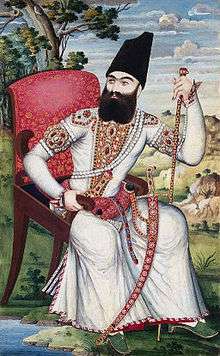 The titles themselves were given by the Kings, Sultans and Emperors (equivalent to the western Fount of honour) to their sons and grandsons, or even distant kins. Noblemen loyal to the kings also received this Title, although their usage differed.

The title itself came from the title emir. Emir, meaning "commander" or "Prince", -derived from the Semitic root Amr, "command". Originally simply meaning commander or leader, usually in reference to a group of people. It came to be used as a title of governors or rulers, usually in smaller states, and usually renders the English word "prince." The word entered English in 1595, from the French émir.[8]

The hereditary title of Mirza was adopted by the nobility class of the Circassians. Idar of Kabardia, also known as "Mirza Haydar Temruk Bey", was the great-grandson of Prince Inal - Sultan of Egypt the founder of the "Temruk dynasty" of the Kabardian princes, known in Russia as the "Cherkassky" a Circassian princely family.

Circassian nobility with the name Mirza include:

Three consecutive titular kings of Shirvan, of the Shirvanshah Dynasty (present-day Azerbaijan), adopted the title as well following the death of Gurban Ali. 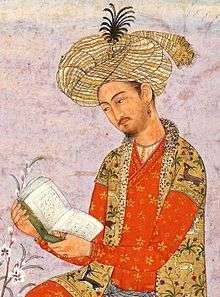 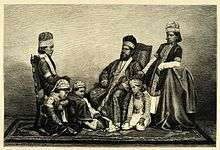 In the Indian Subcontinent (modern day Pakistan, India, Bangladesh), the title Mirza was borne by an imperial prince. It was adopted as part of ones name, implying relationship to the Turk dynasties like the Mughal Dynasty (the Imperial House of Timur).[11] In the traditional naming sequence of the Indian royal families, the title can be placed both before the name and after it, such as Prince Mirza Mughal or Prince Kamran Mirza. Prince Khusrau Mirza was the grandson of Emperor Babur (Babur Mirza), son of Emperor Jahangir and a brother of Emperor Shah Jahan. Emperor Akbar Shah II was known as Prince Mirza Akbar before his coronation. Emperor Babur took the imperial title of Padishah on 6 March 1508, before which he used the title Mirza.[12]

The title Mirza was also adopted by the Muslim Rajputs of Northern India.[13] The Rajputs were rulers of princely states comprising vast territories of Northern India, including the Punjab Region and Kashmir. The Rajput imperial families were descendants of ancient Indo-Aryan warrior classes and formed blood alliances with Mughal aristocracy. Inter-marriage between Mughal aristocracy and Rajput aristocracy became very common and significant factions of Rajput kingdoms embraced the Islamic faith.[14] Many Rajput rulers were granted the title Mirza on account of being high-ranked commanders in the Mughal military.[15] The meaning of Mirza (Persian origin) is a literal translation to the meaning of Rajput (Sanskrit Origin).

Because the Bengali language has no phoneme /z/, Mirza has the local form Mridha (from Mirdhjah) in Bengal and Bihar.[16]