The Ramayana was adopted by several Asian cultures. This Thai artwork shows the battle of Rama and Ravana.

Suryavansha (Suryavam(n)sham or Solar Dynasty) is a mythological dynasty of ancient India. The term Suryavanshi refers to a person belonging to Suryvansha dynasty.

The Puranas, particularly the Vishnu Purana, the Ramayana of Valmiki and the Mahabharata of Vyasa all contain accounts of this dynasty.

The Raghuvansha of Kalidasa also mentions the names of some of the kings of this dynasty.[1][2][3] 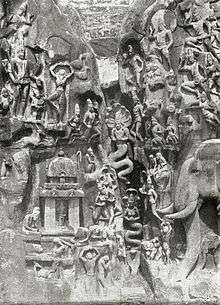 The following is a list, in chronological order, of some of the prominent monarchs of the dynasty;