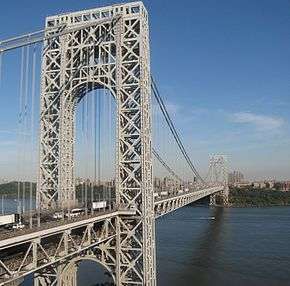 This type of bridge has cables suspended between towers, plus vertical suspender cables that carry the weight of the deck below, upon which traffic crosses. This arrangement allows the deck to be level or to arc upward for additional clearance. Like other suspension bridge types, this type often is constructed without falsework.

The suspension cables must be anchored at each end of the bridge, since any load applied to the bridge is transformed into a tension in these main cables. The main cables continue beyond the pillars to deck-level supports, and further continue to connections with anchors in the ground. The roadway is supported by vertical suspender cables or rods, called hangers. In some circumstances, the towers may sit on a bluff or canyon edge where the road may proceed directly to the main span, otherwise the bridge will usually have two smaller spans, running between either pair of pillars and the highway, which may be supported by suspender cables or may use a truss bridge to make this connection. In the latter case there will be very little arc in the outboard main cables.

The earliest suspension bridges were ropes slung across a chasm, with a deck possibly at the same level or hung below the ropes such that the rope had a catenary shape.

The Tibetan saint and bridge-builder Thangtong Gyalpo originated the use of iron chains in his version of simple suspension bridges. In 1433, Gyalpo built eight bridges in eastern Bhutan. The last surviving chain-linked bridge of Gyalpo's was the Thangtong Gyalpo Bridge in Duksum en route to Trashi Yangtse, which was finally washed away in 2004.[5] Gyalpo's iron chain bridges did not include a suspended deck bridge which is the standard on all modern suspension bridges today. Instead, both the railing and the walking layer of Gyalpo's bridges used wires. The stress points that carried the screed were reinforced by the iron chains. Before the use of iron chains it is thought that Gyalpo used ropes from twisted willows or yak skins.[6] He may have also used tightly bound cloth.

The first American iron chain suspension bridge was the Jacob's Creek Bridge (1801) in Westmoreland County, Pennsylvania, designed by inventor James Finley.[7] Finley's bridge was the first to incorporate all of the necessary components of a modern suspension bridge, including a suspended deck which hung by trusses. Finley patented his design in 1808, and published it in the Philadelphia journal, The Port Folio, in 1810.[8]

The diagram of the chain bridge over the Menai constructed near Bangor, Wales in 1820

Early British chain bridges included the Dryburgh Abbey Bridge (1817) and 137 m Union Bridge (1820), with spans rapidly increasing to 176 m with the Menai Bridge (1826), "the first important modern suspension bridge".[9] The Clifton Suspension Bridge (designed in 1831, completed in 1864 with a 214 m central span) is one of the longest of the parabolic arc chain type. The current Marlow suspension bridge was designed by William Tierney Clark and was built between 1829 and 1832, replacing a wooden bridge further downstream which collapsed in 1828. It is the only suspension bridge across the non-tidal Thames. The Széchenyi Chain Bridge, spanning the River Danube in Budapest, was also designed by William Clark and it is a larger scale version of Marlow bridge.[10]

An interesting variation is Thornewill & Warham's Ferry Bridge in Burton-on-Trent, Staffordshire (1889), where the chains are not attached to abutments as is usual, but instead are attached to the main girders, which are thus in compression. Here, the chains are made from flat wrought iron plates, eight inches (203mm) wide by an inch and a half (38mm) thick, rivetted together. [11]

In the United States, the first major wire-cable suspension bridge was the Wire Bridge at Fairmount in Philadelphia, Pennsylvania. Designed by Charles Ellet, Jr. and completed in 1842, it had a span of 109 m. Ellet's Niagara Falls Suspension Bridge (1847–48) was abandoned before completion. It was used as scaffolding for John A. Roebling's double decker railroad and carriage bridge (1855).

The Otto Beit Bridge (1938–39) was the first modern suspension bridge outside the United States built with parallel wire cables.[13]

The main forces in a suspension bridge of any type are tension in the cables and compression in the pillars. Since almost all the force on the pillars is vertically downwards and they are also stabilized by the main cables, the pillars can be made quite slender, as on the Severn Bridge, on the Wales-England border.

The slender lines of the Severn Bridge

In a suspended deck bridge, cables suspended via towers hold up the road deck. The weight is transferred by the cables to the towers, which in turn transfer the weight to the ground.

Assuming a negligible weight as compared to the weight of the deck and vehicles being supported, the main cables of a suspension bridge will form a parabola (very similar to a catenary, the form the unloaded cables take before the deck is added). One can see the shape from the constant increase of the gradient of the cable with linear (deck) distance, this increase in gradient at each connection with the deck providing a net upward support force. Combined with the relatively simple constraints placed upon the actual deck, this makes the suspension bridge much simpler to design and analyze than a cable-stayed bridge, where the deck is in compression. 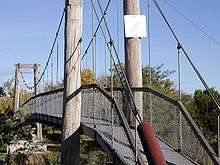 A suspension bridge can be made out of simple materials such as wood and common wire rope. 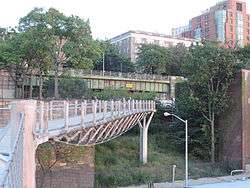 The Yichang Bridge, a plate deck suspension bridge, over the Yangtze River in China

In an underspanned suspension bridge, the main cables hang entirely below the bridge deck, but are still anchored into the ground in a similar way to the conventional type. Very few bridges of this nature have been built, as the deck is inherently less stable than when suspended below the cables. Examples include the Pont des Bergues of 1834 designed by Guillaume Henri Dufour;[12] James Smith's Micklewood Bridge;[14] and a proposal by Robert Stevenson for a bridge over the River Almond near Edinburgh.[14]

Roebling's Delaware Aqueduct (begun 1847) consists of three sections supported by cables. The timber structure essentially hides the cables; and from a quick view, it is not immediately apparent that it is even a suspension bridge.

The main suspension cables in older bridges were often made from chain or linked bars, but modern bridge cables are made from multiple strands of wire. This not only adds strength but improves reliability (often called redundancy in engineering terms) because the failure of a few flawed strands in the hundreds used pose very little threat of failure, whereas a single bad link or eyebar can cause failure of an entire bridge. (The failure of a single eyebar was found to be the cause of the collapse of the Silver Bridge over the Ohio River.) Another reason is that as spans increased, engineers were unable to lift larger chains into position, whereas wire strand cables can be formulated one by one in mid-air from a temporary walkway.

Most suspension bridges have open truss structures to support the roadbed, particularly owing to the unfavorable effects of using plate girders, discovered from the Tacoma Narrows Bridge (1940) bridge collapse. Recent developments in bridge aerodynamics have allowed the re-introduction of plate structures first seen on the Severn bridge built in the 1960's. In the picture of the Yichang Bridge, note the very sharp entry edge and sloping undergirders in the suspension bridge shown. This enables this type of construction to be used without the danger of vortex shedding and consequent aeroelastic effects, such as those that destroyed the original Tacoma Narrows bridge.

Three kinds of forces operate on any bridge: the dead load, the live load, and the dynamic load. Dead load refers to the weight of the bridge itself. Like any other structure, a bridge has a tendency to collapse simply because of the gravitational forces acting on the materials of which the bridge is made. Live load refers to traffic that moves across the bridge as well as normal environmental factors such as changes in temperature, precipitation, and winds. Dynamic load refers to environmental factors that go beyond normal weather conditions, factors such as sudden gusts of wind and earthquakes. All three factors must be taken into consideration when building a bridge.

Use other than road and rail 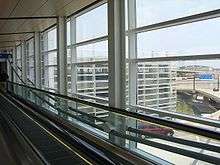 The principles of suspension used on the large scale may also appear in contexts less dramatic than road or rail bridges. Light cable suspension may prove less expensive and seem more elegant for a cycle or footbridge than strong girder supports. An example of this is the Nescio Bridge in the Netherlands.

Where such a bridge spans a gap between two buildings, there is no need to construct special towers, as the buildings can anchor the cables. Cable suspension may also be augmented by the inherent stiffness of a structure that has much in common with a tubular bridge.

The Little Belt suspension bridge in Denmark was opened in 1970.

Manhattan Bridge in New York City with deck under construction from the towers outward. 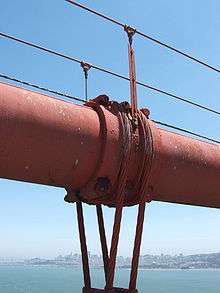 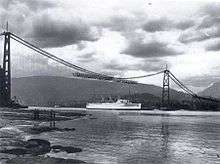 Lions' Gate Bridge with deck under construction from the span's center

Typical suspension bridges are constructed using a sequence generally described as follows. Depending on length and size, construction may take anywhere between a year and a half (construction on the original Tacoma Narrows Bridge took only 19 months) up to as long as a decade (the Akashi-Kaikyō Bridge's construction began in May 1986 and was opened in May 1998 – a total of twelve years).