A schematic image of three types of cantilever. The top example has a full moment connection (like a horizontal flag pole bolted to the side of a building). The middle example is created by an extension of a simple supported beam (such as the way a diving-board is anchored and extends over the edge of a swimming pool). The bottom example is created by adding a Robin boundary condition to the beam element, which essentially adds an elastic spring to the end board. The middle and bottom example may be considered structurally equivalent, depending on the effective stiffness of the spring and beam element

A cantilever is a rigid structural element, such as a beam or a plate, anchored at only one end to a (usually vertical) support from which it is protruding. Cantilevers can also be constructed with trusses or slabs. When subjected to a structural load, the cantilever carries the load to the support where it is forced against by a moment and shear stress.[1]

Cantilever construction allows for overhanging structures without external bracing, in contrast to constructions supported at both ends with loads applied between the supports, such as a simply supported beam found in a post and lintel system.

In bridges, towers, and buildings

Temporary cantilevers are often used in construction. The partially constructed structure creates a cantilever, but the completed structure does not act as a cantilever. This is very helpful when temporary supports, or falsework, cannot be used to support the structure while it is being built (e.g., over a busy roadway or river, or in a deep valley). So some truss arch bridges (see Navajo Bridge) are built from each side as cantilevers until the spans reach each other and are then jacked apart to stress them in compression before final joining. Nearly all cable-stayed bridges are built using cantilevers as this is one of their chief advantages. Many box girder bridges are built segmentally, or in short pieces. This type of construction lends itself well to balanced cantilever construction where the bridge is built in both directions from a single support.

These structures are highly based on torque and rotational equilibrium.

In an architectural application, Frank Lloyd Wright's Fallingwater used cantilevers to project large balconies. The East Stand at Elland Road Stadium in Leeds was, when completed, the largest cantilever stand in the world[2] holding 17,000 spectators. The roof built over the stands at Old Trafford Football Ground uses a cantilever so that no supports will block views of the field. The old, now demolished Miami Stadium had a similar roof over the spectator area. The largest cantilever in Europe is located at St James' Park in Newcastle-Upon-Tyne, the home stadium of Newcastle United F.C.[3][4]

Less obvious examples of cantilevers are free-standing (vertical) radio towers without guy-wires, and chimneys, which resist being blown over by the wind through cantilever action at their base.

The pioneering Junkers J 1 all-metal monoplane of 1915, the first aircraft to fly with cantilever wings

Another use of the cantilever is in fixed-wing aircraft design, pioneered by Hugo Junkers in 1915. Early aircraft wings typically bore their loads by using two (or more) wings in a biplane configuration braced with wires and struts. They were similar to truss bridges, having been developed by Octave Chanute, a railroad bridge engineer. The wings were braced with crossed wires so they would stay parallel, as well as front-to-back to resist twisting, running diagonally between adjacent strut anchorages. The cables and struts generated considerable drag, and there was constant experimentation on ways to eliminate them.

It was also desirable to build a monoplane aircraft, as the airflow around one wing negatively affects the other in a biplane's airframe design. Early monoplanes used either struts (as do some current light aircraft), or cables like the 1909 Bleriot XI (as do some modern home-built aircraft). The advantage in using struts or cables is a reduction in weight for a given strength, but with the penalty of additional drag. This reduces maximum speed, and increases fuel consumption.

Hugo Junkers endeavored to eliminate virtually all major external bracing members, only a dozen years after the Wright Brothers' initial flights, to decrease airframe drag in flight, with the result being the Junkers J 1 pioneering all-metal monoplane of late 1915, designed from the start with all-metal cantilever wing panels. About a year after the initial success of the Junkers J 1, Reinhold Platz of Fokker also achieved success with a cantilever-winged sesquiplane built instead with wooden materials, the Fokker V.1.

The most common current wing design is the cantilever. A single large beam, called the main spar, runs through the wing, typically nearer the leading edge at about 25 percent of the total chord. In flight, the wings generate lift, and the wing spars are designed to carry this load through the fuselage to the other wing. To resist fore and aft movement, the wing will usually be fitted with a second smaller drag-spar nearer the trailing edge, tied to the main spar with structural elements or a stressed skin. The wing must also resist twisting forces, done either by a monocoque "D" tube structure forming the leading edge, or by the aforementioned linking two spars in some form of box beam or lattice girder structure.

Cantilever wings require a much heavier spar than would otherwise be needed in cable-stayed designs. However, as the size of an aircraft increases, the additional weight penalty decreases. Eventually a line was crossed in the 1920s, and designs increasingly turned to the cantilever design. By the 1940s almost all larger aircraft used the cantilever exclusively, even on smaller surfaces such as the horizontal stabilizer, with the Messerschmitt Bf 109E of 1939-41 being one of the last World War II fighters in frontline service to have bracing struts for its stabilizer.

Two equations are key to understanding the behavior of MEMS cantilevers. The first is Stoney's formula, which relates cantilever end deflection δ to applied stress σ:

where ν is Poisson's ratio,

is the beam length and

is the cantilever thickness. Very sensitive optical and capacitive methods have been developed to measure changes in the static deflection of cantilever beams used in dc-coupled sensors.

The second is the formula relating the cantilever spring constant

to the cantilever dimensions and material constants:

by the usual harmonic oscillator formula

. A change in the force applied to a cantilever can shift the resonance frequency. The frequency shift can be measured with exquisite accuracy using heterodyne techniques and is the basis of ac-coupled cantilever sensors.

The principal advantage of MEMS cantilevers is their cheapness and ease of fabrication in large arrays. The challenge for their practical application lies in the square and cubic dependences of cantilever performance specifications on dimensions. These superlinear dependences mean that cantilevers are quite sensitive to variation in process parameters, particularly the thickness as this is generally difficult to accurately measure.[7] However, it has been shown that microcantilever thicknesses can be precisely measured and that this variation can be quantified.[8] Controlling residual stress can also be difficult. 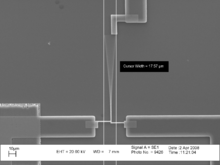 A chemical sensor can be obtained by coating a recognition receptor layer over the upper side of a microcantilever beam.[10] A typical application is the immunosensor based on an antibody layer that interacts selectively with a particular immunogen and reports about its content in a specimen. In the static mode of operation, the sensor response is represented by the beam bending with respect to a reference microcantilever. Alternatively, microcantilever sensors can be operated in the dynamic mode. In this case, the beam vibrates at its resonance frequency and a variation in this parameter indicates the concentration of the analyte.

A cantilever rack is a type of warehouse storage system consisting of the vertical column, the base, the arms, and the horizontal and/or cross bracing. These components are fabricated from both roll formed and structural steel. The horizontal and/or cross bracing are used to connect two or more columns together. They are commonly found in lumber yards, woodworking shops, and plumbing supply warehouses.