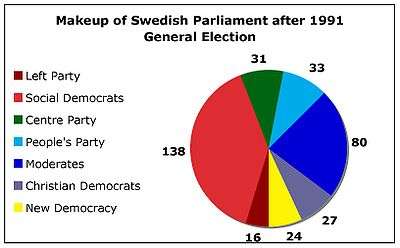 General elections were held in Sweden on 15 September 1991.[1] The Swedish Social Democratic Party remained the largest party in the Riksdag, winning 138 of the 349 seats.[2]

The election was notable due to the rise of a new right-wing populist party named New Democracy which succeeded in securing a parliamentary mandate for the first (and last) time.

The four parties of the centre-right coalition (the Centre Party, Liberal People's Party, Moderate Party, and Christian Democratic Society Party) were allocated a combined total of 171 seats, 17 more than the two left-wing parties' 154, but still less than the 175 necessary for a majority. Thus the centre-right bloc was dependent upon New Democracy to secure a parliamentary majority.

This election was also famous for the performance of the Donald Duck Party, which collected 1,535 votes, enough to make it the 9th largest in Sweden. The protest party's platform consisted of the demand for "free liquor and wider sidewalks."