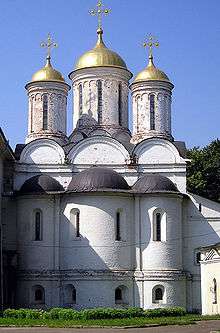 The triple apse of an Orthodox church. The Altar is in the larger central apse, the Prothesis in the apse to the right, and the Diaconicon in the one to the left.

The Prothesis is the place in the sanctuary [1] in which the Liturgy of Preparation takes place in the Eastern Orthodox and Greek-Catholic Churches. 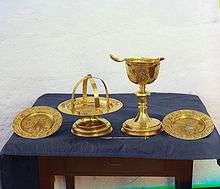 Originally, the Prothesis was located in the same room as the Holy Table, being simply a smaller table placed against the eastern wall to the north of the Holy Table. During the reign of the Emperor Justin II (565–574), it came to occupy its own separate chamber to the north of the sanctuary, having a separate apse, and joined to the Altar by an arched opening. Another apsed chamber was added on the south side for the Diaconicon. So that from this time forward, large Orthodox churches were triapsidal (having three apses on the eastern side). Smaller churches still have only one chamber containing the Altar, the Prothesis and the Diaconicon.

In the Syriac Churches, the ritual is different, as both Prothesis and Diaconicon are generally rectangular, and the former constitutes a chamber for the deposit of offerings by the faithful. Consequently, it is sometimes placed on the south side, if by doing so it is more accessible to the laity.

In the Coptic Church, the men will enter the Prothesis to receive holy Communion (the women receive in front of the Holy Doors), and must remove their shoes before entering.

This article is issued from Wikipedia - version of the 3/16/2013. The text is available under the Creative Commons Attribution/Share Alike but additional terms may apply for the media files.