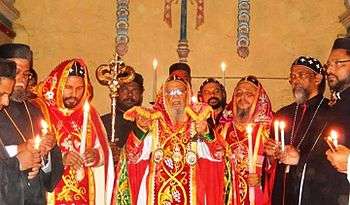 Syriac Christianity (Syriac: ܡܫܝܚܝܘܬܐ ܣܘܪܝܝܬܐ‎ / mšiḥāiūṯā suryāiṯā) encompasses the multiple Churches of Eastern Christianity whose services tend to feature liturgical use of ancient Syriac, a dialect of Middle Aramaic that emerged in Edessa in the early 1st century AD, and is closely related to the Aramaic of Jesus.[1]

With a history going back to the 1st century AD, Syriac Christianity is, in modern times, represented by denominations primarily in the Middle East, Asia Minor and in Kerala, India.

Further information: History of Eastern Christianity and History of the Assyrian people

Syriac Christian heritage is transmitted through various Neo Aramaic dialects (particularly the Syriac dialect of Assyria and Upper Mesopotamia) of old Aramaic. Unlike the Greek Christian culture, Assyrian Christian culture borrowed much from early Rabbinic Judaism and its own indigenous ancient Mesopotamian culture. Whereas Latin and Greek Christian cultures became protected by the Roman and Byzantine empires respectively, Syriac Christianity often found itself marginalised and sometimes actively persecuted by the Zoroastrian rulers of the Parthian Empire and succeeding Sassanid Empire. Antioch was the political capital of this culture, and was the seat of the Patriarchs of the church. However, Antioch was heavily Hellenized, and the Assyrian cities of Edessa, Nisibis and Sassanid Ctesiphon became Syriac cultural centres.

The early literature of Syriac Christianity includes the Diatessaron of Tatian; the Curetonian Gospels and the Syriac lSinaiticus; the Peshitta Bible; the Doctrine of Addai and the writings of Aphrahat; and the hymns of Ephrem the Syrian.

The first division between Syriac Christians and Western Christianity occurred in the 5th century, following the First Council of Ephesus in 431, when the Assyrian Christians of the Sassanid Persian Empire were separated from those in the west over the Nestorian Schism. This split owed just as much to the politics of the day as it did to theological orthodoxy. Ctesiphon, which was at the time also the Sassanid capital, eventually became the capital of the Church of the East.

After the Council of Chalcedon in 451, many Syriac Christians within the Roman Empire rebelled against its decisions. The Patriarchate of Antioch was then divided between a Chalcedonian and non-Chalcedonian communion. The Chalcedonians were often labelled 'Melkites' (Emperor's Party), while their opponents were labelled as Monophysites (those who believe in the one rather than two natures of Christ) and Jacobites (after Jacob Baradaeus). The Maroniote Church found itself caught between the two (allegedly embracing Monothelitism), but claims to have always remained faithful to the Catholic Church and in communion with the bishop of Rome, the Pope.[2]

The church has persisted as a separate entity under Islamic rule. The community was one of those granted autonomy in governing itself in religious and family matters under the millet system.[3] In the 19th century many left for other parts of Christendom, creating a substantial diaspora.[4]

Over time, some groups within each of these branches have entered into communion with the Church of Rome, becoming Eastern Catholic Churches. 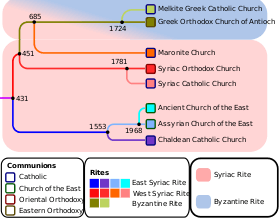 Historical divisions within Syriac Christian Churches in the Middle East.

The term "Syrian" (and by extension "Syriac") was originally an Indo-European corruption of "Assyrian" (Assurayu), and was used by speakers of Indo-European languages exclusively in relation to Assyria in northern Mesopotamia, from the period of the Neo Assyrian Empire (935-605 BC) onwards.[5] During the Seleucid Empire (323-150 BC), its Greek rulers applied the name not only to Assyria proper and its people, but also to Biblical Aramea in the Levant, which had been a colony of Assyria during the Middle Assyrian Empire (1366-1020 BC) and Neo Assyrian Empire (911-605 BC). When they lost Assyria itself to the Parthian Empire, they retained the name "Syria" but only applied it to what had been Aramea, which they still retained.[6][7] This led to the Greco-Roman and later European tradition of referring to both Assyrians/Mesopotamians and Arameans as "Syrians" and "Syriacs", despite both being historically, ethnically, linguistically, genetically and geographically distinct from one another.[8]

The indigenous Assyrians (Syriac: ܣܘܪܝܝܐ, Arabic: سُريان) of Mesopotamia adopted Christianity very early, and from the 1st century A.D. onwards it began to supplant the three millennia old traditional Mesopotamian religion, although this religion did not fully die out until as late as the 10th century AD. The Neo-Assyrian kingdom of Osroene was the first Christian kingdom in history.

In 431 A.D. the Council of Ephesus declared Nestorianism to be a heresy. The Nestorian priests, who were persecuted in the Byzantine Empire, sought refuge in Mesopotamia where the Church of the East was dominant, then part of the Sassanid Empire. There was a synthesis between the Assyrian Church and Nestorian doctrine. From there they spread Christianity to Persia, India, China, and Mongolia. This was the beginning of the Nestorian Church, the eastern branch of Syrian Christianity. The western branch, the Jacobite Church, appeared after the Council of Chalcedon condemned Monophysitism in 451 A.D.[9]

Many now largely Arabic speaking Syriac Orthodox and Syriac Catholics from the bulk of Syria (excluding the Assyrian northeast) and south central Turkey prefer a Syriac-Aramean national identity while others adhere to a purely religious Syriac identity.

A small number of mainly United States based Chaldean Catholics have also recently adopted a Chaldean or Chaldo-Assyrian national identity, despite there being absolutely no historical, archaeological, written, linguistic or geographical evidence whatsoever to support any link to the long extinct Chaldeans of the far southeast of Mesopotamia. These people are in fact ethnic Assyrians originating from the Assyrian homeland in northern Iraq.

The older Assyrian designation has almost completely replaced the word Nestorian (which is seen by Assyrians as pejorative and meaningless as an ethnic term). However, the word Nestorian continues to be used in some Western academic literature.

The use of the word Syriac (which originally referred to the Syrian language, a dialect of Middle Aramaic which arose in Assyria) instead of Syrian became common after the establishment of the Arab majority modern nation of Syria after World War I, Assyrians and Syriac-Arameans not being Arabs and wishing to distinguish themselves from them. The word 'Syrian' has become ambiguous in English since it can refer now to a citizen of Syria regardless of ethnicity, and is also now largely accepted to have originally meant Assyrian. In Arabic, however, the word for a 'citizen of Syria' has a different form (سوري sūrī) from the traditional word for an ethnic Assyrian/Syrian (سُرياني suryānī).

Churches of the Syriac tradition

Syrian Christians were involved in the mission to India, and many of the ancient churches of India are in communion with their Syriac cousins. These Indian Christians are known as Saint Thomas Christians.

In modern times, various Evangelical denominations began to send representatives among the Syriac peoples. As a result, several Evangelical groups, particularly the "Assyrian Pentecostal Church" (most in America, Iran, and Iraq) have been established and the Aramean Free Church (most in Germany, Sweden, Amerika and Syria). However, despite these Assyrian protestants having been converted from the Assyrian Church of the East and Chaldean Catholic Church, due to their recent historical origin, such groups and others are not normally classified among those Eastern Churches to which the term "Syriac Christianity" is traditionally applied.