Tang poetry (traditional Chinese: 唐詩; simplified Chinese: 唐诗; pinyin: Táng shī) refers to poetry written in or around the time of or in the characteristic style of China's Tang dynasty, (June 18, 618 - June 4, 907, including the 690-705 reign of Wu Zetian) and/or follows a certain style, often considered as the Golden Age of Chinese poetry. The Quantangshi includes over 48,900 poems written by over 2,200 authors. During the Tang dynasty, poetry continued to be an important part of social life at all levels of society. Scholars were required to master poetry for the civil service exams, but the art was theoretically available to everyone.[1] This led to a large record of poetry and poets, a partial record of which survives today. Two of the most famous poets of the period were Li Bai and Du Fu. Tang poetry has had an ongoing influence on world literature and modern and quasi-modern poetry.

A Tang dynasty era copy of the preface to the Lantingji Xu poems composed at the Orchid Pavilion Gathering, originally attributed to Wang Xizhi (303-361 AD) of the Jin dynasty

The periodization scheme employed in this article is the one detailed by the Ming dynasty scholar Gao Ping (1350-1423) in the preface to his work Tangshi Pinhui, which has enjoyed broad acceptance since his time.[2] This system, which unambiguously treats poetry composed during the reign of Emperor Xuanzong (the "High Tang" period) as being superior in quality to what came before and after, is subjective and evaluative, and often does not reflect the realities of literary history.[3]

Within the shi form, there was a preference for pentasyllabic lines, which had been the dominant metre since the second century C.E., but heptasyllabic lines began to grow in popularity from the eighth century.[5] The poems generally consisted of multiple rhyming couplets, with no definite limit on the number of lines but a definite preference for multiples of four lines.[5]

The Quantangshi ("Complete Tang Poems") anthology compiled in the early eighteenth century includes over 48,900 poems written by over 2,200 authors.[6] The Quantangwen (全唐文, "Complete Tang Prose"), despite its name, contains more than 1,500 fu and is another widely consulted source for Tang poetry.[6]

The poetic tradition inherited by the Tang poets was immense and diverse. By the time of the Tang dynasty, there was already a continuous Chinese body of poetry dating back for over a thousand years. Such works as the Chu Ci and Shijing were major influences on Tang poetry, as were the developments of Han poetry and Jian'an poetry. All of these influenced the Six Dynasties poetry, which in turn helped to inspire the Tang poets. In terms of influences upon the poetry of the early Tang, Burton Watson characterizes the poetry of the Sui and early Tang as "a mere continuation of Six Dynasties genres and styles."[7] 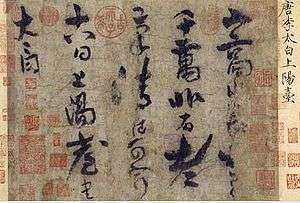 A poem by Li Bai (701-762 AD), the only surviving example of Li Bai's calligraphy, housed in the Palace Museum in Beijing.

The Tang dynasty was a time of major social and probably linguistic upheavals. Thus, the genre may be divided into several major more-or-less chronological divisions, based on developmental stages or stylistic groupings (sometimes even on personal friendships between poets). It should be remembered that poets may be somewhat arbitrarily assigned to these based on their presumed biographical dates (not always known); furthermore that the lifetimes of poets toward the beginning or end of this period may overlap with the preceding Sui dynasty or the succeeding Five Dynasties and Ten Kingdoms period. The chronology of Tang poetry may be divided into four parts: Early Tang, High Tang, Middle Tang, and Late Tang.

In Early Tang (初唐), poets began to develop the foundation what is now considered to be the Tang style of poetry inherited a rich and deep literary and poetic tradition, or several traditions. Early Tang poetry is subdivided into early, middle and late phases.

In High Tang (盛唐), sometimes known as Flourishing Tang or Golden Tang, first appear the poets which would come to mind as Tang poets, at least in the United States and Europe. High Tang poetry had numerous schools of thought:

The poets of the Middle Tang (中唐) period also include many of the best known names, and they wrote some very famous poems. This was a time of rebuilding and recovery, but also high taxes, official corruption, and lesser greatness. Li Bo's bold seizing of the old forms and turning them to new and contemporary purposes and Du Fu's development of the formal style of poetry, though hard to equal, and perhaps impossible to surpass, nevertheless provided a firm edifice on which the Middle Tang poets could build.

In the Late Tang (晚唐), similarly to how eventually the earlier duo of Li Bo and Du Fu came to be known by the combined name of Li-Du (李杜), so in the twilight of the Late Tang there was the duo of the Little Li-Du (小李杜), referring to Du Mu (803-852) and Li Shangyin (813-858). These dual pairs have been considered to typify two divergent poetic streams which existed during each of these two times, the flourishing Tang and the late Tang:

After the official fall of the Tang dynasty in 907, some members of its ruling house of Li managed to find refuge in the south of China, where their descendants founded the Southern Tang dynasty in the year 937. This dynasty continued many of the traditions of the former great Tang dynasty, including poetry, until its official fall in 975, when its ruler, Li Yu, was taken into captivity. Importantly for the history of poetry, Li survived another three years as a prisoner of the Song dynasty, and during this time composed some of his best known works. Thus, including this "afterglow of the T'ang dynasty", the final date for the Tang Poetry era can be considered to be at the death of Li Yu, in 978.[11]

After the fall of the Tang dynasty

Surviving the turbulent decades of the Five Dynasties and Ten Kingdoms era, Tang poetry was perhaps the major influence on the poetry of the Song dynasty, for example seeing such major poets as Su Shi creating new works based upon matching lines of Du Fu's.[12] This matching style is known from the Late Tang. Pi Rixiu and Lu Guimeng, sometimes known as Pi-Lu, were well known for it: one would write a poem with a certain style and rhyme scheme, then the other would reply with a different poem, but matching the style and with the same rhymes. This allows for subtleties which can only be grasped by matching the poems together.

Succeeding eras have seen the popularity of various Tang poets wax and wane. The Qing dynasty saw the publication of the massive compilation of the collected Tang poems, the Quantangshi, as well as the less-scholarly (for example, no textual variants are given), but more popular, Three Hundred Tang Poems. Furthermore, in the Qing dynasty era the imperial civil service examinations the requirement to compose Tang style poetry was restored.[13] In China, some of the poets, such as Li Bo and Du Fu have never fallen into obscurity; others, such as Li Shangyin, have had modern revivals.

Many collections of Tang poetry have been made, both during the Tang dynasty and subsequently. In the first century of the Tang period several early collections of contemporary poetry were made, some of which survive and some which do not: these early anthologies reflect the imperial court context of the early Tang poetry.[14] Later anthologies of Tang poetry compiled during the Qing dynasty include both the imperially commissioned Quan Tang shi and the scholar Sun Zhu's own privately compiled Three Hundred Tang Poems. Part of an anthology by Cui Rong, the Zhuying ji also known as the Collection of Precious Glories has been found among the Dunhuang manuscripts, consisting of about one-fifth of the original, with fifty-five poems by thirteen men, first published in the reign of Wu Zetian (655-683). The book contains poems by Cui Rong (653-706), Li Jiao (644-713), Zhang Yue (677-731), and others.[15]

The most popular Tang Poems collection might be the so-called 300 Tang Poems compiled by Qing dynasty scholar Sun Zhu. It is so popular that many poems in it have been adopted by Chinese language text books of China's primary schools and secondary schools. Some of the poems in it are normally regarded as must-recite ones.

He said he found the poems in the poetry textbook students that had been using, "Poems by A Thousand Writers" (Qian-jia-shi), were not carefully selected but a mixture of Tang dynasty poems and Song dynasty poems written in different styles. He also regarded that some poetry works in that book were not very well-written in terms of language skill and rhyme.

Therefore, he picked those best and most popular poems from Tang dynasty only and formed this new collection of about 310 poems including poems by the most renowned poets such as Li Bo and Du Fu.

These poems are about various topics including friendship, politics, idyllic life and ladies' life, and so on.

My Reflection by Night
by Du Fu
Some scattered grass. A shore breeze blowing light.
A giddy mast. A lonely boat at night.
The wide-flung stars o’erhang all vasty space.
The moonbeams with the Yangtze’s current race.
How by my pen can I to fame attain?
Worn out, from office better to refrain.
Drifting o’er life — and what in sooth am I?
A sea-gull floating twixt the Earth and Sky.

Tang poetry has certain characteristics. Contextually, the fact that the poems were generally intended to be recited in more-or-less contemporary spoken Chinese (now known as Classical Chinese; or, sometimes, as Literary Chinese, in post-Han dynasty cases) and that the poems were written in Chinese characters are certainly important. Also important are the use of certain typical poetic forms, various common themes, and the surrounding social and natural milieu.

Relationship to Buddhism, Taoism, and Confucianism

The Tang dynasty time was one of religious ferment, which was reflected in the poetry. Many of the poets were religiously devout. Also, at that time religion tended to have an intimate relation with poetry.

There has been some interest in Tang poetry in the field of gender studies. Although most of the poets were men, there were several significant women. Also, many of the men wrote from the viewpoint of a woman, or lovingly of other men. Historically and geographically localized in Tang dynasty China, this is an area which has not escaped interest from the perspective of historical gender roles.