Landscape with Poems from An Album the Three Perfections, by Jiang Shijie

The Qing dynasty was the last imperial dynasty of China, ruling from 1644 to 1911 with a brief restoration, in 1917. The Qing Dynasty was preceded by the Ming Dynasty and followed by the Republic of China. The dynasty was founded by the Manchu Aisin Gioro clan in contemporary Northeastern China, under the rule of Nurhachi, a former vassal of the Ming emperors. By 1635, Nurhachi's son Hong Taiji could claim they constituted a single and united Manchu people and eventually they seized control of Beijing and overthrew Li Zicheng's short-lived Shun Dynasty, completing their conquest of China around 1683 under the Kangxi Emperor. Over the course of its reign, the Qing integration with Chinese culture included the continuation of Chinese literature and Classical Chinese poetry. The imperial examinations continued and Han civil servants administered the empire alongside Manchu ones. 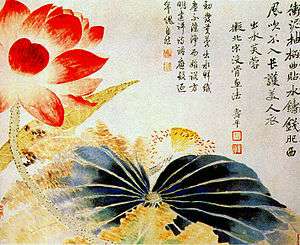 Classical Chinese poetry continued to be the major poetic form of the Qing Dynasty. This was also a time of related literary developments, such as the collections of Tang poetry, under the Kangxi Emperor. The debates, trends and widespread literacy of the Ming period began to flourish once again after a transitional period during which the Qing Dynasty had established its dominance. The "Three Masters of Jiangdong" wrote during the Ming-Qing transition. They were Gong Dingzi, Wu Weiye, Qian Qianyi, who were influential in reviving the ci (song lyric) style. [2]

In addition to those identified primarily as poets, such as Wang Shizhen, Nara Singde (Nalan Xingdei), and Zhao Yi, many figures known for their contributions in other fields wrote memorable poetry. such as the philosopher Gu Yanwu [3] The fresh poetic voice of Yuan Mei has won wide appeal, as have the long narrative poems by Wu Jiaji.[4]

Kunqu opera matured and led toward the later Chinese opera tradition of drama, poetry and music combined. The painter-poet tradition thrived with exemplars such as Yun Shouping.[5] The challenge for researchers grew as even more people became poets and even more poems were preserved, including (with Yuan Mei's encouragement) more poetry by women.[6] In 1980 fine shi poems by the famed Qing novelist Liu E were published for the first time, illustrating the potential to continue finding sunken treasure in the vast body of surviving Qing poetry.[7]

Much of the modern popular versions of Classical Chinese poetry were transmitted through Qing Dynasty anthologies, such as the Quantangshi and the Three Hundred Tang Poems.