During early 19th century, horse carts were the main transportation medium for carrying goods and passengers in the present city area. A long line of horse carts used to stand at that time. There is a common belief that the name Tangail has been originated from the word tanga meaning horse carts.

Tangail was a popular local business centre since early 19th century. But the name came on focus when the headquarter of a subdivision of the Greater Mymensingh District was shifted in 1860 from Atia to there due to its fertility and high elevation near Louhajong River. At the same time, The subdivision was named as Tangail.

The Municipal Corporation or pourashava was established on 1 July 1887. During its establishment the town was composed of five wards.

Afterwards, the pourashava was reshaped into four wards:

Iin 1988 it was subdivided into six wards:

After decisions for a few years, in 1999 the town was subdivided into 18 wards and gained its present shape.

The first election of the town was held in November 1887. In that election eight ward commissioners from four wards were elected by direct vote of the citizens of the town. On the other hand, the then Subdivision Commissioner of Tangail, Shashi Shekhar Dutt, was appointed as the first administrator of Tangail municipality. There was no pakka street in this town then. No lamp post could be seen in the roads. In the 1890s the town was lacking safe water supply, too. The regional zamindars and subdivision board came forward and helped financially to dig ponds, lakes and canals. Those sources served the local people with a safe water supply.

The people of Tangail used to visit Kolkata through Charabari by launch and Dhaka through Mymensingh. In the early 1930s, electricity line was first provided in the town. The rickshaws started to roll in town's streets. In the 1960s, pakka roads were constructed in the town. In the meantime, Tangail was directly connected to Dhaka by road. Many bridges and culverts were constructed to develop the area. The town got water by pipelines at that time.

In 1985 Tangail municipality was promoted to 'B Class' from 'C Class'. In 1989 the pourashava was promoted to 'A Class'. In 1990s, The town was financed by Asian Development Bank and Government of Bangladesh to develop water supply, sanitation, wastewater drainage, bus terminal, supermarkets and other infrastructure.[3]

Cricket is the most popular sport in Tangail. Football and kabaddi are also popular. All important sports events of the city are held in Tangail Stadium which is beside Bhashani hall and Tangail Eid-gah. The stadium has hosted national events. It was the home venue of Bangladesh Football Premier League club Team BJMC. It was converted into a cricket stadium in 2015. First Division Cricket is regularly hosted in this venue.

The total area of Tangail city is 35.22 km2. The government of Bangladesh has planned to expand the city. After expansion it will have a proposed area of 81.75 km2.[4] The city consists of 18 wards and 64 mahallas until 2016.

Karatia is the suburb of Tangail. 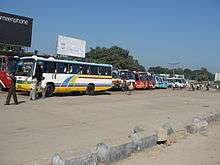 It takes approximately 1 hour and 55 minutes to reach Tangail from Dhaka city, via Kaliakair and Tongi. The distance is around 98 km. From Mohakhali (মহাখালী) bus terminal, several buses run to this city. Among them Nirala, Dhaleshwari, Jhatika and High Choice are notable.

There are eight notable high schools in the city:

There are several colleges in the city.